A screening of his new videos. 4 films feature the artist's documentation of acts that elaborate the excesses of the state. In an adjoining space, artists Atul Dodiya, Tushar Joag, Justin Ponmany, Riyas Komu, Simon Liddiment and Nikhil Raunak explore their own relationships with the state through works interspaced between posters of the Cultural Revolution from the Clark House Initiative archive. 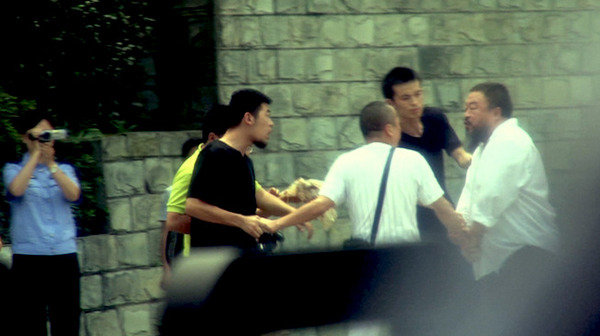 Arranging Chairs for Ai Weiwei' is a ten-day screening of videos directed by contemporary Chinese artist Ai Weiwei, from the 12th to the 22nd of April 2012. Four films feature the artist's documentation of acts that elaborate the excesses of the state. The films deal with bureaucratic corruption, obstruction of justice, state violence, suppression of human rights, and his own personal struggle with surveillance by the police.

“LAO MA TI HUA”, or " Disturbing the Peace" produced in 2009, features an incident during the trial of Tan Zuoren, a civil rights advocate who was charged and sentenced to five years of imprisonment for inciting subversion of state power. In 2008 the Sichuan Earthquake, with its epicenter in the Wenchuan County in Southwest China, claimed more than 120,000 lives, as per the official tally. More than 5,000 of the victims were children who perished while they were at school. Tan Zuoren conducted an independent investigation that proved these deaths were caused by the shoddy construction of the schools; exposing the financial corruption on the part of the state officials involved in their construction.

Yang Jia, a man from Beijing, was executed in 2008 for having murdered 6 Shanghai police officers using various weapons. He committed the crime as a result of frustration over the lack of resolution of his case, having ridden a bicycle he had hired but that the police claimed was unlicensed. He was executed shortly after the Beijing Olympic games after a trial that was mired in controversies of cover-ups and conflicts of interest on the part of his lawyers. In ' One Recluse', Ai Weiwei unearths governmental collusions that deprive Yang Jia of a fair trial, how the disappearance of his mother and the suspicious hire of lawyers expedite a judicial inquiry that resembles a charade of police theatre.

Ordos or 'Palaces' in Mongolian is a city in the Chinese autonomous region of Inner Mongolia. The city is marked by lavish government projects and infrastructure that sometimes has little use. Upon invitation from a private developer and the city authorities, Ai Weiwei and Swiss architects Herzog & de Meuron curate a project to design one hundred 1000 sq. mt. villas by architects selected from twenty-seven countries. In 'Ordos 100' the architects are on their first ever site visit to the desert patch where their villas would be eventually built. Ai Weiwei films the discussions that transpire between the architects that range between confident enthusiasm to disbelief. What emerges from this movie is a documentation of the challenges an ambitious project like Ordos faces, and provides answers for the possible failure of its realization.

Using 9000 school backpacks Ai Weiwei wrapped the Haus der Kunst, Munich in 2009 with bold Chinese lettering that read 'She lived happily for seven years in this world' - quoted by Ai Weiwei from a mother remembering her dead daughter. Prior to traveling to Munich for the installation of his show ‘So Sorry’, Ai Weiwei traveled to Chengdu in Sichuan Provence to attend the trial of Tan Zuoren, when he was assaulted by the police in his hotel room at night. While installing his show at the Haus der Kunst in Munich, Ai suffered painful headaches, caused by a brain hemorrhage, for which he needed an emergency operation. Refusing to accede to the charge of corruption on its part, the government never released the accurate statistics on the dead. With ‘So Sorry’ Ai Weiwei begins to mend the insensitive erasure of the memory of these children.

In April last year Ai Weiwei disappeared for 81 days, taken away by the police for alleged evasion of taxes but more likely for his belief that a stance on political and social issues was an artist's moral prerogative. To mark the first anniversary of his incarceration, Ai Weiwei launched a website called weiweicam on the 3rd of April 2012. Four web cameras streamed his activities live onto the internet, in an attempt by him to ease the efforts of continuous surveillance by his tormentors. 46 hours after its launch, Ai Weiwei was ordered to abort his self-surveillance and weiweicam.com has since been blank.

For the 12th edition of Documenta that took place in Kassel in 2007, Ai Weiwei participated by inviting 1001 Chinese citizens to Germany to come and live out their own fairytale for 28 days. 'Fairytale' is a video directed by Ai Weiwei that documents the complex logistical task of choosing candidates and how art practice negotiates with procedures such as visas. His guests were given custom designed luggage along with lodging spaces in the form of a large dormitory living installation. Guests were mostly those who could not have managed, or envisaged going to Germany otherwise, and consisted of farmers from remote rural villages, members of ethnic minorities, and art students. This video is being presented in partnership with Mohile Parikh Center - The Contemporary in Bombay.

Last summer Clark House hosted an exhibition 'Right to Dissent' in solidarity with a movement against the incarceration and persecution of Dr. Binayak Sen, a medical doctor and human rights advocate who had once been sentenced to life for sedition against the state. Before his incarceration Dr. Sen had been working within the forests of central India collecting data on the epidemic of malnutrition widespread amongst the tribal indigenous communities living there. A year since Ai Weiwei's arrest, Clark House stands in solidarity with his art practice for its conscious moral stance on issues that concern the relationship between the citizen and the state.

Chairs are arranged for an audience to come and watch and welcome Ai Weiwei to India through his videos. In an adjoining space, artists Atul Dodiya, Tushar Joag, Justin Ponmany, Riyas Komu, Simon Liddiment, and Nikhil Raunak explore their own relationships with the state and how political histories inform their practice through works interspaced between posters of the Cultural Revolution from the Clark House Initiative archive.

We thank Ai Weiwei and his studio in Beijing for their critical support.