The collaborative exhibition by Jeuno JE Kim and Lasse Krog Moller presents curious collections, from patterned inner sides of selected envelopes to small hand-drawn maps and a diverse repertoire of handkerchiefs. Hauntings I is a site-specific installation consisting of 11 short films; the work is a 3D collage in which the viewer can move among and around the visual ghosts comprised by the films. 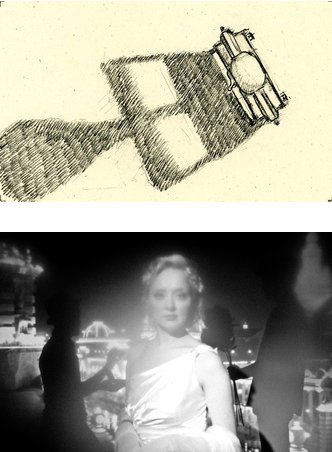 Overgaden is pleased to present the exhibition Tingen – From the Greece Gropers Foundation by Jeuno JE Kim and Lasse Krog Møller as well as the spectacular installation Hauntings I by the Canadian video artist and experimental film director, Guy Maddin.

This collaborative exhibition by Jeuno JE Kim and Lasse Krog Møller presents curious collections, from patterned inner sides of selected envelopes to small hand-drawn maps and a diverse repertoire of handkerchiefs. One display cabinet is even devoted to a careful investigation into the origin of dust bunnies, where we can study the tiny particles we daily brush off our skirting boards and trouser pockets.

The artists present a total of ten collections from the fictional institution Greece Gropers Foundation, focusing on systems of classification and overall institutional structures. The front exhibition space at Overgaden works as the lobby of the foundation and presents a clay sculpture of a miniature staircase with the inscription 'Obligatory Optimism', the motto of the institution. Also, there's a 1:1 scale model of a desk referencing both the lobby interior and an artist's workstation and neat drawings depict desk landscapes with rubber stamps, ashtrays and coffee rings.

The work The Knight's Tour (10x10) extends from the lobby to the rear space of the exhibition. On a long plinth, the institution's departments are each represented by an architectural model illuminated by spotlights. In the back space you can study collections from the many different museum departments, research centres and archives of the foundation.

Greece Gropers, the founder of the institution, is an anagram of the author Georges Perec. His literary methods, as reflected in the novel Life: A User's Manual, have structured the artists' working processes and the conceptual structure of the exhibition. By imitating a museological presentation form, the exhibition highlights the systems and classifications through which we come to understand the world, and questions the institutional distinction between the interesting, the invaluable and the discarded.


Guy Maddin: Hauntings I
The phantoms of film history will be occupying Overgaden in a presentation of the internationally acclaimed video artist and experimental film director, Guy Maddin. Guy Maddin's works have been presented in museums and at film festivals all over the world but this is the first time they are presented in Denmark in an art context.

Overgaden is presenting Hauntings I (2010), a site-specific installation consisting of eleven short films. The work is a three-dimensional collage in which the viewer can move among and around the visual ghosts comprised by the films. Maddin draws his visual inspiration from the early silent movies, as well as from surrealist and symbolist painting. The captivating aesthetics of spinning film reels and flickering images have become Maddin's stylistic signature, in interaction with absurd scenarios and exalted melodramas.

Hauntings I is the culmination of a 25-year artistic career, and revolves around the reappearance of the repressed, whether of a sexual, historical or artistic nature. For a number of years, Guy Maddin has collected anecdotal tales of unrealised and abandoned film projects, as well as completed films that have been lost to history. In the eleven films, Maddin processes his own ideas about the lost films of directors like F.W. Murnau, Fritz Lang, Hollis Frampton, Kenji Mizoguchi and Josef von Sternberg. His fascination with the potential masterpieces is expressed through small impressionistic fragments of a lost film history that haunts our culture.

Hauntings I was commissioned by the Toronto International Film Festival. The exhibition in Copenhagen is a collaboration between Overgaden and CPH PIX, the city's international film festival.