Arte>Panama 2003. The event will gather artists of various countries and have them react to the city so as to work with it as passersby, while a smaller group of Panamanians will do the same as natives. Every artist has been invited to create an individual piece in the streets and with the streets. Whether the artwork is to be ephemeral or not, the intention is not simply to create "public art" in a traditional sense. 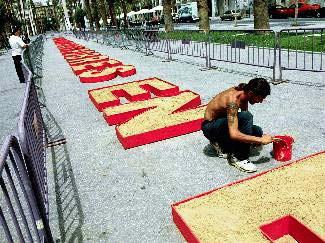 Curated by Gerardo Mosquera and Adrienne Samos, and organized by Arpa, MultipleCity. Arte>PanamÃ¡ 2003 will constitute the most important international event in the field of the arts throughout the entire history of Panama.

From March 20 through April 20 MultipleCity will gather artists of various countries and have them react to the city so as to work with it as passersby, while a smaller group of Panamanians will do the same as natives. Every artist has been invited to create an individual piece in the streets and with the streets. Whether the artwork is to be ephemeral or not, the intention is not simply to create "public art" in a traditional sense.

The key issue here is that the artworks must respond to physical, social, and cultural aspects of the city. At the same time, the artists should actively relate to the city, and struggle with its myriad seductions and pressing problems. It is intended that the processes and final works (without necessarily being interactive) involve the various urban communities, and have some sort of impact upon them.

â€œMultipleCity is not conceived as a long interactive experience of foreign artists with the city and its communities but as a response to its fragmentation, hybridization and rapidity,â€ says curator Gerardo Mosquera. â€œWhat we wanted is the artistsâ€™ reactions to the urban environment of Panama, both as passersby and natives.â€

Ghada Amer Billboards installed in various locations in the city. Duration: one month.

Gustavo Araujo The artistâ€™s chosen phrase will be exhibited in five big commercial billboards located in different urban spaces. The remaining billboards will be intervened throughout the month all over the city. The artist will also â€œinvadeâ€ empty billboards. The phrase will also appear in bus stops and newspapers. Duration: one month.

Every work and event of ciudadMULTIPLEcity will be free and open to all the public.

Brooke Alfaro (Panama) is working with two rival street gangs. Their members live in tenement buildings located in the most destitute sector of Panama City. Alfaro aims to convince these gangs â€“each one separatelyâ€“ to sing a song composed by Rookie, a local musician much admired by the marginal Panamanian urban youth. During MultipleCity the two videos that portray the opposing gangs singing the same song, will be projected simultaneously on the facades of two adjacent buildings situated inside the â€œwar zoneâ€.

Francis AlÃ¿s (Belgium/Mexico) will "seize" a specific public site -a street or plaza teeming with houses and shops- in order to provoke a situation: Many people cross paths. If a person were to ask another for silence, and this one ask yet another, and so forth, until the whole scene becomes still, eventually 1 minute of silence might be formed.

Ghada Amer (Egypt/USA) will work with CÃ©sar Santiago CÃ³rdova, JosÃ© Madrid, Oscar Melgar, RamÃ³n Enrique Ormi y AndrÃ©s Salazar, painters of â€œred devilsâ€, the name given to the distinctive local public buses. In six billboards, which are to be placed in strategic points around Panama City, each one of these painters will be given a site-specific Chinese proverb for him or her to interpret.

Gustavo Araujo (Panama) will â€œinvadeâ€ the empty billboards of Panama City with an ironic turn of phrase that aims to bring awareness to key social issues.

Gustavo Artigas (Mexico) A building of great historical value will appear to be caught in flames, alluding to the numerous fires that have devastated this city at different times, and to the destruction of collective memory. This simulation will seem so real that the media is expected to cover the event, propagating the rumour of an actual disaster.

artway of thinking (Italy), a group consisting of artists Federica Thiene and Stefania Mantovani. Though disjointed, both the sea and land communities are essential to Panamanian urban culture. For MultipleCity artway of thinking, together with local fishermen, will organize a guided tour all along Panama Cityâ€™s coastline, which will culminate in a big celebration facing the Bay of Panama.

Yoan Capote (Cuba) will perfume and upholster a dozen garbage containers located in a particular sector of Panama City.

Cildo Meireles (Brazil). The "Panamini" (a scale model of a "Panamax" --the category of ships designed with the maximum size capable of crossing the Panama Canal) will be navigated, by remote control, across the Canal, beating the world record of the smallest ship ever to pass through it.

Juan AndrÃ©s MilanÃ©s (Cuba) will place many large slabs of ice next to each other, creating a huge, even surface in a popular district on the coastline of Panama City. MilanÃ©s will offer special handmade gear (created by the Cuban artist Esvier Jeffer Durruthy) to the neighborhoodâ€™s children and youth so they can ski and ice-skate in the urban tropic.

Humberto VÃ©lez (Panama) will work with a brass and percussion marching band, known as the Banda del Hogar, integrated by the students of a family-operated sewing and vocational school. It parades every year during Independence Day, projecting a mystique that parallels Panamaniansâ€™ fascination with patriotic fanfare. Together, VÃ©lez and the school, will fabricate banners fusing his personal input with the latterâ€™s unique style. During MultipleCity, la Banda del Hogar will parade at the â€œwrongâ€ place and time.

Gu Xiong (China/Canada) will create a public piece in Panama Cityâ€™s Chinatown, engaging the people who live and work in this populous and important district. Big banners and multicoloured ribbons will be hung from one side of the main street to the other (recalling the Chinese festive tradition). Each one of these banners will display a photograph of a person, accompanied by words that speak about an aspect of his or her identity, repeated in Spanish, Cantonese and English.