An Arbitrary History. During the exhibition the museum will be partly transformed into an amusement park or funhouse. As in his firework sculptures, Cai explores the boundary separating spectacle and art. 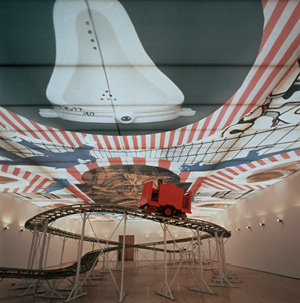 The thread running through Cai Guo-Qiangâ€™s diverse, eclectic body of work is his constant search for manâ€™s place in the natural and social universe. Each new work attempts to widen our understanding of the complex relationship between man, the Earth and space. The fundamental idea behind his work has been the derivation of power and energy from nature. In this he allots an important role to chance or what is beyond our control. In his work he confronts aggressive elements with gentle facets. Cai aims to make art that is both universal and intimate.

The work of Cai Guo-Qiang involves such themes as national and cultural identity, intercultural exchange, spirituality - especially eastern philosophy - and the power of nature. In this way our awareness of the interaction of different cultures from the past, present and future is sharpened. His projects are larded with references to history, specific locations, events and the body of ideas in contemporary art. Using elegant metaphors he achieves a poetic universality. One of the most important characteristics of his creations is the diversity of materials used: in his work he incorporates materials such as paper kites, Jacuzzis, miniature golf courses, melted car engines, wood derived from decayed boats and things like classical sculptures.

Caiâ€™s minutely organized events, performances or installations in several parts are restricted to a particular area, are often very brief, and mainly known through photos and documentation. This also applies to his work Dragon Skeleton / Suture of the wall (9.11.1996), a drawing on the wall in S.M.A.K. which he made during a brief explosion of gunpowder at the opening of the Red Gate exhibition. The mural drawing is a scar on the wall of the museum storage space, and is permanent and fixed yet cannot be displayed to the public.
In his hands gunpowder does not acquire a negative connotation (destruction, violence), but is once more related to its original function: communication. At the same time he is also interested in the constructive and deconstructive aspects of gunpowder, in the way in which destruction can also recreate. In this context he refers to the Big Bang or the genesis of Creation where man and cosmos greet one another during a brief period of chaos.
Cai has become widely known during recent years and has participated in many international exhibitions and projects. He was awarded the Golden Lion for his work at the 1999 Venice Biennale. Last summer he was given the privilege of organising an event (also with fireworks, noise and smoke) for the opening of the new MoMA in Queens, New York.


EXHIBITION AT S.M.A.K. IN GHENT: AN ARBITRARY HISTORY

One might consider the exhibition An Arbitrary History a retrospective in that it brings together many of his works from recent years. On the other hand, Cai has devised a total concept and installation in which different works are given their own space. During the exhibition the museum will be partly transformed into an amusement park or funhouse. As in his firework sculptures, Cai explores the boundary separating spectacle and art. In doing so he reconciles aspects of traditional Asian culture such as the well-known dragon icon, herbal medicine or fireworks, with a more Western, detached approach towards art.

Two total installations will be set up, running through several rooms of the museum. An Arbitrary History: River meanders through the Gallery in a bed made of bamboo. Cai asks the visitor to sit in a boat and experience the exhibition as he sails down a river of bamboo. All along the river one sees works by the artist, which have been suspended in space. The whole installation reminds the visitor of boats in the Efteling or Bellewaerde amusements parks, where visitors are told an animated story as they sail along. Here, with Cai, it is the story of his work. The second installation is An Arbitrary History: Roller Coaster, a metal structure with little carts for the visitor to sit in; it is a simplified version of the big dipper one usually sees at a funfair or amusement park. A large fabric with reproductions of so-called icons of Belgian art history is suspended above this route.

Sitting in the carts or boats is, as it were, the only way one can acquire insight into the alienating world the artist has built up. Everything there is to be seen takes place before our eyes or - to be more precise - above our heads. Cai deconstructs the traditional exhibition space and changes the passive way in which we usually look at art. Our gaze is directed upwards and we encounter works with fish in a gigantic aquarium, a cage of birds, red lanterns, male and female bodies, burning moxa sticks, etc. Along the â€˜riverâ€™ we see a collection of curiosities, a collection of objects from the Far East in the middle of which the visitor is trapped for a few minutes - even if voluntarily. The artist asks us Westerners to go on a voyage of initiation through his world of arbitrary interpretation of history - his own and the west.

Parallel to River and Rollercoaster the museum presents two monumental sculptures in the entrance hall of the museum, including a gigantic upside down boat pierced by numerous oars and spears. Modeled after a Roman battle boats, and like an eagle spreading its wings, the boat is completed with a fan and EU flag and entitled The Eagle has arrived!.

The exhibition brings together a total of 35 works by Cai. During the opening ceremony Cai plans to pay tribute to Jan Hoet on the wall above the information desk of the museum with a work called Inheritance. After letting off gunpowder with lines of gunpowder fuse, the marks left behind on the wall will reveal a portrait of the founder of the museum. It will be an inheritance for the museum to content with.