Ercole Pignatelli's first solo show in London, Le Foreste Incantate, explores the artist's belief that the fundamental purpose of painting is to communicate in a language that can be understood by everyone. Ercole strives to achieve this by appealing to the dreamer in us all. 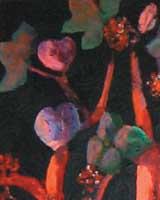 Ercole Pignatelli's first solo show in London, Le Foreste Incantate, explores the artist's belief that the fundamental purpose of painting is to communicate in a language that can be understood by everyone. Ercole strives to achieve this by appealing to the dreamer in us all.

Recurring elements that illustrate the intangible are present throughout his work. Perhaps the most striking of these are the voluptuous nudes part concealed behind a veil of incense and a screen of Corinthian vines. In another work, a majestic palm hovers tantalizingly beyond reach behind a white wall against a sun drenched background. Equally tempting are his round, ripe, ochre coloured fruit that you literally want to pick from the canvas. In all his paintings, Pignatelli creates a dizzying hubub of commotion with gushing torrents, serpents, birds of the Alhambra, wild date palms, dazzling columns and pinnacles and papier mache angels.

But he is not just concerned with the evocation of a dreamy and settling 'otherworld'. In stark contrast to this idiom, another motif he employs is that of buildings without windows which give the impression of imprisonment, oppression and isolation.

Ercole Pignatelli was born in Lecce in April 1935 and has lived and worked in Milan since 1953.
Despite his lengthy absence from his native Puglia he remains anchored to the region, from which he derives endless inspiration. The exotic places and figures that he depicts are influenced more by the flavours, colours and forms of his homeland than his adopted 'otherworld'.

Pignatelli has an experimental approach to a traditional style of painting and it is this fusion that results in the beautifully engaging paintings he creates. In 1997, the Petersburg Museum of Otaru, Japan dedicated a fundamental full career retrospective of his work to coincide with an exhibition of Pablo Picasso and his contemporaries. Like his cubist forbears, Pignatelli is obsessed with themes of a metaphysical nature and nowhere is Picasso's influence more consistently explicit than in Pignatelli's depiction of the female form.

It is no coincidence that the Sapone Gallery in Nice, which represented Picasso when he was alive, also represents Pignatelli today. Ercole's international acclaim is also testament to the fact that his work hangs in the world's most important museums of modern art from MoMA, New York to the Museum of Modern Art, Tokyo. He has been twice invited to exhibit at the Venice Biennale and has been selected by Milan's Museo La Besana to exhibit a full retrospective of his work in 2004.

Gallery hours: Thursday to Saturday 11am - 7pm or by appointment.