Natures. Utsu circumscribes new worlds, guaranteeing their existence and permanence; Hosokura'work is the prolonging of the senses, a means of dialogue with the world, a transcription and abstraction of emotional and spiritual landscapes. 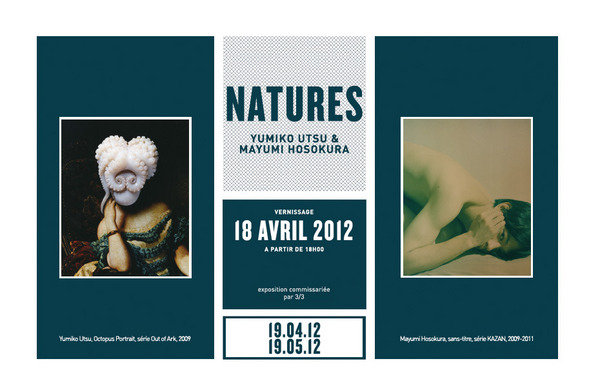 Following the success of the Mizuno Oto - Sound of Water exhibition (FotoGrafia - Festival Internazionale di Roma 2011), 3/3 was invited by LWS Gallery to present a selection of photographs from Utsu’s Out of Ark and Hosokura’s Kazan.

The research of the two artists is far removed from documentation, for their photography does not record reality, but is instead a means of creating and relating. On the one hand, as in Utsu’s case, it circumscribes new worlds, guaranteeing their existence and permanence; on the other, as with Hosokura, it is the prolonging of the senses, a means of dialogue with the world, a transcription and abstraction of emotional and spiritual landscapes.

Yumiko Utsu is a visionary photographer, capable of projecting us into crowded scenes with great imaginative power, where attraction and repulsion co-exist. Fishes, food, dolls, fabrics and old prints populate her pictures and find unexpected contents and meanings in them. Familiar, decontextualised and upturned elements interpret unusual roles in mises en scène that are as playful as they are desecrating, which accumulate in a centrifugal itinerary within the imagination of an artist with a more than Dadaist freedom.

The resulting sensation is familiarity and, at the same time, disconnection and opening. Released from their original contexts, the everyday elements present in the pictures drag us into new surreal and iconic worlds, both ambiguous and elusive, in an authentic journey through a fantastic universe, inhabited by creatures that have come out of a new Ark, Out of Ark.

The appearance and themes of Hosokura’s work are more familiar to contemporary photography, and are particularly close to a certain school of subjective-hedonistic depiction of private life that is very sensual and associated with nature, but reveals strong traces of a material and chromatic sensitivity that has much in common with the immediateness and delicacy also visual of much contemporary Japanese photography.

The theme behind Kazan, the project on which the artist spent the past four years working, recently published in the book of the same name, is the continuous tension between opposing elements of life and nature: on the one hand the ephemeral character of physical youth, play and relations, on the other the permanence of nature, minerals and plants.

Hosokura’s research is evocative and seductive, incorporating an attentive balance of orchestration and chance, the staged and the spontaneous. The pictures are composed in such a way to demand empathy and touch the imagination of their viewers, taking them, by way of a profound formal and chromatic investigation, from one sensation to another and from reality to imagination.

Yumiko Utsu, Squid Mask, from the series Out of Ark, 2008

Yumiko Utsu Yumiko Utsu was born in Tokyo in 1978. She won the 26th Hitotsubo award in 2006. Utsu has shown her works in many solo and collective exhibitions including the Daegu Photo Biennale, Korea; the Pingyao Photo Festival, China, and at the G/P gallery. Her first international solo show was held at the Lumen Gallery in Budapest and the G/P gallery in Tokyo. Out of Ark, her first photo-book, was published in 2009 by artbeat publishers.

Mayumi Hosokura Mayumi Hosokura was born in 1979 in Kyoto. She is a graduate of the Faculty of Literature at Ritsumeikan University and also has a photography degree from the Nihon University of Art (2005). She was shortlisted for the Hitotsubo award in 2004 and 2005. She was recently selected for Foam magazine’s Talent issue (2011). Her latest publication KAZAN was published by artbeat publishers in March 2012.

A selection of Yumiko Utsu and Mayumi Hosokura books by artbeat publishers and the catalogue of the exhibition Mizuno Oto will be available at the gallery.