Setting. The last in a series of 4 inter-related exhibitions, in which Beasley takes the trapezoid interior of the gallery as a model for the interior of an apartment in Turin which Italian architect and designer Carlo Mollino designed and decorated secretly towards the end of his life. 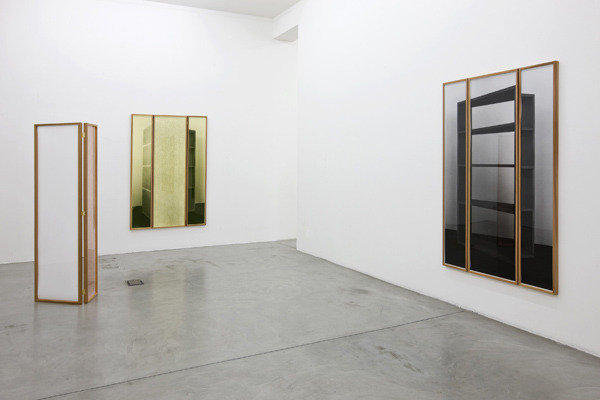 Laura Bartlett Gallery is delighted to announce Setting, an exhibition by British artist, Becky Beasley, her third solo exhibition at the gallery.

Setting is last in a series of four inter-related exhibitions, in which Beasley takes the trapezoid interior of Laura Bartlett Gallery as a model for the interior of an apartment in Turin which Italian architect and designer Carlo Mollino designed and decorated secretly towards the end of his life. Imagined as a fantasy after-life apartment, Casa Mollino trans-historically incorporated his lifelong meditations on interiors into a final mausoleum space. As a pretext for thinking more deeply about colour, decor and photography, Beasley developed a relationship with the three dimensional spaces of the apartment and also with the book, Message from the Darkroom, written by Mollino and published in 1949. This beautifully produced book is at once a history of photography- the first in Italy- and also a deeply personal mediation on the subject. These two works formed the axes through which Beasley has developed her own deeply personal body of work.

Setting is imagined as a meditation on the space of the still-life. Here, however, Beasley draws ones focus away from the figure to the margins: to the support in the form of a deadpan pair of shelves for her parents, based on their body dimensions; to the ground of the image through details of walls in Mollino’s apartment which were once mirrored but which have faded to leave only the gestures of hand-painted silver coating; to the possibilities of a slight movement of the lens or eye across the surface of a glass vitrine. The dimensions of the work, Setting (C.M.)- the first in a series of 1:1 scale gelatin silverprints of a piece of white Chantilly lace- are those of a pair of swing doors which Beasley discovered in Mollino’s blueprints for the apartment, but which he never produced.

Mirrors and The Ovals are Beasley’s first diasec mounted colour works - in which photographs are permanently encapsulated between highly reflective perspex and aluminium sheets. Beasley has developed the sculptural possibilities of this mounting system by cutting the object into an oval, the dimensions for which are based on a small, mirrored porthole door in the bathroom of the apartment. Beasley has explored the colours in the negatives, drawing on the chromatic complexities of surface, light and film stock in relation to the subjective difficulties encountered when dealing with remembered colour. The works become elaborations on the subject of colour and language, in particular the ‘ish’ used in the English language - silverish, goldish - to attempt to describe indefinite colours. The photographs become repositories for colour and surface.

Becky Beasley’s exhibition The Outside is on view at Tate Britain until 2 September, 2012.

Image: The Outside, 2011. Exhibition view at Francesca Minini, Milan