Gliss. The exhibition features a chorus of melodic TV talking heads singing a version Cloud Busting, a Kate Bush track based on the bizarre cloud bursting machine of psychologist, Wihelm Reich, to an enormous anthropomorphic lump of clay defiantly rejecting its relationship with technology. 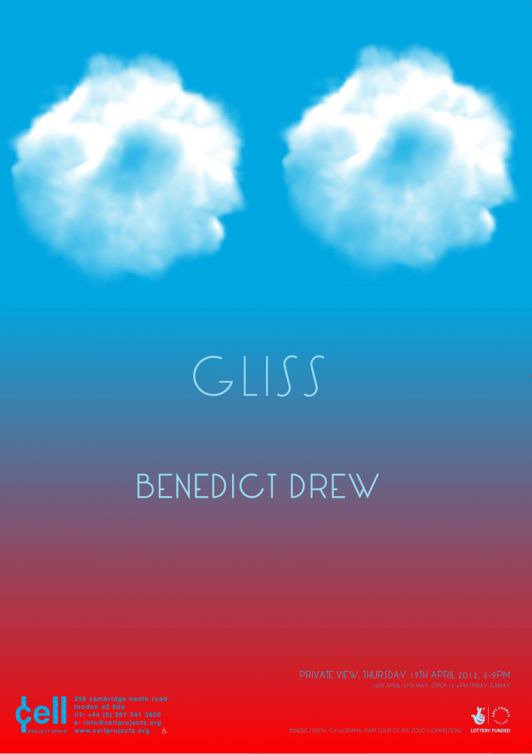 LISS is a newly commissioned solo project for the third instalment of Cell Project Space's CYcLORAMA programme by the artist Benedict Drew.

Benedict Drew works across video, performance, sound and other media. His work uses the apparatus of film, video and music to test and reflect upon the relationships we have with technology and its oscillation between the exalted and the commonplace, between desire and redundancy. Within the exhibition GLISS Drew attempts to highlight the slippage of meaning and physical simulacra of natural and technological phenomena. He starts with a cloud as a point of departure for ideas, both as the recognisable visible mass of liquid droplets and a fluffy symbol of serenity and optimism, but then soon slides into thought bubbles and vast networks of information hanging over computer desktops and mobile applications. GLISS hums and throbs of the internet server racks that control everyday life. They rotate in a vast mechanical limbo and finally connect to an exasperated materialist fiction about a descent to the depths of a mine.

Drew’s recent publication How I Failed To Make Man 2011 reduces man to the four main elements; water, air, carbon and calcium. This step by step visual account documents the artist's futile attempt to implant the living into the inorganic. GLISS is an immersive and visceral installation, which goes further to provoke human sensory and cognitive responses as sound and image induce sensory powers of calm and well being, but it also highlights our anxiety and rejection of technological systems. The exhibition features a chorus of melodic TV talking heads singing a version Cloud Busting, a Kate Bush track based on the bizarre cloud bursting machine of psychologist, Wihelm Reich, to an enormous anthropomorphic lump of clay defiantly rejecting its relationship with technology. Drew’s unlikely material combinations are fused with the electrical pulse of computer technology to catalyse and transform the obsolete nature of analog media.

Benedict Drew lives and works in Whitstable and Margate. In 2011 he graduated from the Slade School of Art and exhibited the work ‘The Persuaders’ at The James Taylor Gallery, London and Circa Site, Newcastle. Since then he has shown at Banner Repeater, London, collaborated with Auto Italia South East, London: ‘Talking Objects in Space’, and with Rhodri Davies as part of ‘CIRCA Projects’ Seeing in The Dark’ exhibition, Newcastle, October- November, 2011.

He has frequently collaborated with a diverse mix of artists and musicians including Otomo Yoshihide, Rhodri Davies, Greg Pope, Emily Richardson, ‘The Work In Progress’, Sachiko M and Emma Hart performing often in the UK and internationally including the Tate Modern , London (with Sachiko M), the Yamaguchi Centre for Art, Japan (with Otomo Yoshihide. In collaboration with Emma Hart he has performed at Rotterdam Film Festival, ‘Kill Your Timid Notion’, Dundee Contemporary Arts Centre, ICA London, ‘Performa 09’ New York and The Museum of Contemporary Canadian Art as part of ‘images festival’ where they together received an ‘OCAD Off Screen Award’ for the installation ‘untitled seven’. Benedict Drew has made many radio works for Resonance FM , most recently the series ‘Unter Radio’. For many years he curated the ‘London Musicians’ Collective annual festival of experimental music’.

In 2012 Benedict Drew will present a second solo exhibition at OUTPOST, Norwich (July), Film London's Selected touring screening program and will take part in the Whitstable Biennale (September). He is currently lead- artist for Chisenhale Gallery’s Propeller Project and a LUX Associate Artist.

Supported by the Arts Council of England