Autonomous InterGalactic Space Program, an interdisciplinary collaboration with weavers, seamstresses, painters, carpenters, and cultural activists in Chiapas, takes the form of a large-scale sculptural environment for the Gallery. It attempts to realize the possibilities of intercommunal and intergalactic dialogue through sculptures, tapestries, and painted murals that give shape and voice to the Zapatista community's struggle for autonomy in the face of globalization. 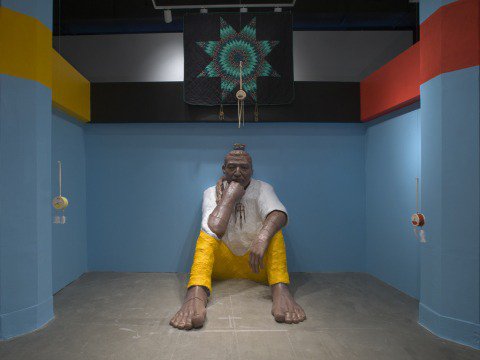 Initiated by San Francisco-based artist Rigo 23, Autonomous InterGalactic Space Program is an interdisciplinary collaboration with weavers, seamstresses, painters, carpenters, and cultural activists in Chiapas, Mexico. Taking the form of a large-scale sculptural environment, Rigo 23′s project for the Gallery at REDCAT is the outgrowth of the artist’s direct contact and negotiation with the Good Government Junta of Morelia, Chiapas, part of a governing body that represents the interests of the autonomous communities and artisan co-ops throughout the region. Autonomous InterGalactic Space Program is organized around the theme “Another World, Another Path,” articulated by the Zapatista Army of National Liberation (EZLN) at the First Global Festival of Dignified Rage in 2009, which marked the group’s fifteenth anniversary and underscored its commitment to Mayan conceptions of the cosmos.

Based on the iconography and imagery of the EZLN, Autonomous InterGalactic Space Program attempts to realize the possibilities of intercommunal and intergalactic dialogue through sculptures, tapestries, and painted murals that give shape and voice to the Zapatista community’s struggle for autonomy in the face of globalization. The planetary constellations and vegetal spacecrafts that form the basis of the exhibition illustrate the movement’s radical politics, its belief in the ability to overcome the constraints of time and space, and its commitment to the redistribution of land ownership. As part of a continuum informed by Rigo 23′s collaborative relationships with artists and producers in Chiapas, Autonomous InterGalactic Space Program aims to further engender the interplanetary transmission and dissemination of the political and cultural ideology of the Zapatista movement into cosmic space and beyond.

Rigo 23 (b. 1966, Madeira Island, Portugal) has exhibited nationally and internationally since the mid-1980s. With an emphasis on forms of community-based practice, Rigo 23′s murals, paintings, sculptures, and public interventions have been exhibited at the Serralves Museum, Porto, Portugal (2011); the New Museum, New York (2009); Museu de Arte Contemporânea, Niterói, Brazil (2007); the Museum of Contemporary Art, Santiago, Chile (2000); and the University of California, Berkeley Art Museum (1999). Rigo 23 has also been included in such biennials and international exhibitions as the 2009 Shenzhen & Hong Kong Bi-city Biennale of Urbanism/Architecture; the 2009 Lyon Biennale in Lyon, France; the 4th Liverpool Biennial in 2006; and the 2004 California Biennial at the Orange County Museum of Art. Autonomous InterGalactic Space Program marks Rigo 23′s first exhibition in Los Angeles since 1997.