Fortunate Islands. Cooper continues to be interested in the cultural and geographic changes that occur when old explorer routes are retraced and how this retracing leads to a new recognition of how we think and feel about place, define ideas of home and engage with historical spaces. 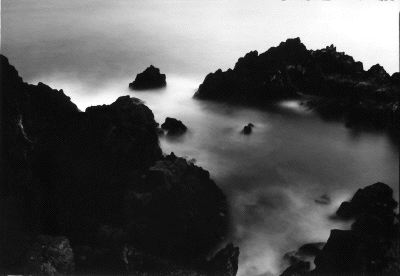 The opening of the exhibition will take place on Friday, April 4t from 6pm until 8pm. The artist will be present.

Fortunate Islands was a phrase used by sailors from the late 16th century until the early 19th century to describe the Canary Islands and the Madeiran Archipelago, not only because their beauty and climate made them as close to paradise as could be imagined, but also because the islands were considered the closest to the edge of the Earth before the time of Columbus. The exhibition begins with photographs of County Kerry, Ireland, the birth place of St. Brendan called Brendan the Voyager who is believed to have reached the Canary Islands and perhaps Madeira in the 5th century. The final image of the exhibition is Faro Orchillo on the Isle of El Hierro, the western most point on the Canary Islands, which was once literally and is now metaphorically at the edge of the world. Cooper continues to be interested in the cultural and geographic changes that occur when old explorer routes are retraced and how this retracing leads to a new recognition of how we think and feel about place, define ideas of home and engage with historical spaces.

Using an 1898 field camera and shooting only one image of each location, Cooper composes his images so that the scale of the composition is not always immediately apparent. The printing of the pieces further enhances the intensely emotive nature of his work. CooperÂ¹s technical mastery of the photographic medium is renowned. The images are subtly "under painted" with selenium and gold resulting in blue and maroon tones, in the photographic printing process. CooperÂ¹s editions are usually limited to a maximum of three prints all of which he makes himself, however his painterly process ensures that each print is effectively unique. Thomas Joshua Cooper was born in San Francisco in 1946. Cooper is a member of the Cherokee nation and in his formative years, lived on Indian reservations throughout the western United States. He has resided in Glasgow, Scotland for the past twenty years where he is Professor and Head of the Department of Photography at The Glasgow School of Art. Cooper has exhibited widely in both museums and galleries around the world. His work is included in museum, public and private collections worldwide. In 1998 Cooper was the recipient of an important grant from the Lannan Foundation, which he has been using, in part, to complete a body of work, 10 years in the making, entitled The Great River Â­ Rio Grande Crossings Â­ From the Source to the Sea. The project will culminate in a major exhibition curated by Michael Govan, director of the DIA Center for the Arts, and in a comprehensive publication on CooperÂ¹s work.

Please contact Amy Gotzler at the gallery (212.239.1181) or amy@skny.com for more information.
Gallery hours are Tuesday through Friday from 11am until 6pm and Saturday from 10am until 6pm.