The show On Apology investigates public and private iterations of the apology in the works of 11 international artists, part of the exhibiton is 'the Sorry Series', that presents public performances and events. 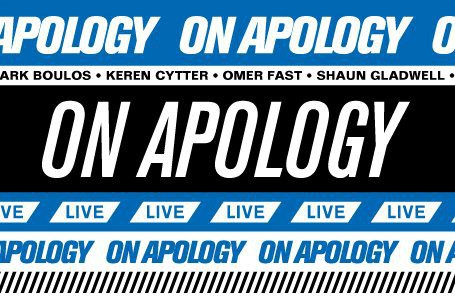 On Apology is an exhibition produced by the graduating class of the Graduate Program in Curatorial Practice at California College of the Arts with the support of the Wattis Institute for Contemporary Arts.

The public apology has in recent times become a widely prevalent phenomenon. Politicians, corporate and pop-culture figures, from Bill Clinton to Toyota’s chief executives, have openly expressed remorse for everything from minor private indiscretions to major corporate wrongdoings. The mechanisms for “saying sorry” are crafted for broad public consumption and conveyed through the mass media, and are accordingly all-pervasive. The effectiveness of the broadcast apology is complicated by public expectations for reconciliation or recompense, and the unlikelihood of these expectations being met. Despite the fact that overuse has arguably rendered the apology a bankrupt form of meaningful expression, it persists as a means of damage control, and, ironically perhaps, of enshrining a kind of idealism.

On Apology, references Jacques Derrida’s 2001 essay “On Forgiveness,” which provides an insight into views on the act of forgiving, and the possibility of genuine forgiveness versus the complexities of amnesty, apology, and contrition. Similarly, the show itself seeks to outline the multifaceted perspectives and exchanges of power that are central to the formulation of apologies, with the works navigating the integrity of sincere regret, fraught apologies or even the absence of contrition. It intends to question, under what circumstances are apologies warranted? Can one person apologize on behalf of another? Is the value of the apology contingent upon written or spoken language, or do symbolic, performative gestures speak louder than words? On Apology investigates public and private iterations of the apology, examining how apologies are formed, their subtlety or lack thereof, and their potential, if any, to accomplish real change.

As an adjunct program to On Apology (April 19-May 19, 2012), The Sorry Series will investigate public and private iterations of the apology, examining how apologies are formed, their subtlety or lack thereof, and their potential, if any, to accomplish real change.

The first two performances will coincide with the opening reception of On Apology, with a poetry reading by Kevin Killian and a sound performance by Emily Lacy, where she will perform a processional apology from the perspective of a mythic corporation lurking in contemporary imagination.

Kevin Killian is one of the original "New Narrative" writers of the 1980s. His most recent books include an edition of Jack Spicer's collected poems (which he edited); Impossible Princess, a book of stories published by City Lights; and a second volume of his Selected Amazon Reviews. He lives in San Francisco.

Emily Lacy is a folk and electronic sound artist generating works in music, film, and other media. Lacy is currently living, working and recording in LA. She has performed in exhibitions at PS1 MOMA, the Whitney Museum of American Art, the Hammer Museum, the Walker Art Center, and LACMA, in addition to various DIY spaces all throughout America. She works very closely with Machine Project.

Tuesday, May 1st, 7:00 p.m.
You Don't Have to Say You're Sorry: Screen Cultures, Public Apologies, and Private Guilt
with Abigail De Kosnik

Friday, May 11th, 6:00 p.m.
I will not bomb Iran (100 times)
A project by Dawn Weleski, in collaboration with students from the International Studies Academy

*All events are free and open to the public, and will take place at the Kent and Vicki Logan Galleries unless otherwise noted.