The Moment I Became a Collector. Miettinen Hosts Berlin Art Collectors. The Finnish collector invites fellow collectors from Berlin to exhibit the artwork that marked the beginning of their personal career as a collector. 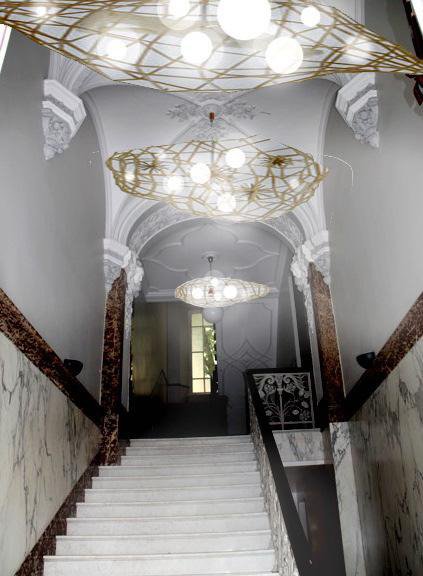 The exhibition’s concept focuses on the fascination with and the origins of collecting.
Finnish collector Timo Miettinen invites fellow collectors from Berlin to exhibit the artwork that marked the beginning of their personal career as a collector. Miettinen as host also shows the work that represents the initial spark for his collecting, initiating a dialogue on the phenomenon of collecting art.
Each work exhibited is accompanied by a statement of the collector describing the key moment connected with the respective work. In best salon culture tradition, the piano nobile of the Marburger 3 thus presents, discusses and documents a polyphony of voices and images. A conscious choice was made to ask collectors of different generations to share their key moment in order to give a multi-layered panoramic view of the Berlin collecting landscape.

The Location - The Marburger 3 and Salon Dahlmann
The salon is named after Hildegard Dahlmann, the last owner of the house, before family Miettinen bought it in 2010. With the Salon Dahlmann, Timo Miettinen is establishing a link to Berlin’s salon culture tradition which originates not far from the Marburger 3, in the area of the Kurfürstendamm in West Berlin. The collector and host wishes his salon to present an eclectic program including a range of different formats. He wants to open his space up to organizers of external events looking for a suitable location for workshops, concerts, performances, exhibitions and other interesting encounters. Marburger 3 also represents a family project initiated by Timo Miettinen and his three sisters Marjo Miettinen, Anu Miettinen and Taru Kokkomäki. Following the building’s renovation, this exhibition now marks its formal opening.
The Collector – Timo Miettinen

Timo Miettinen, chairman of Ensto Oy Finland, has had a close connection with art ever since he was fifteen years old. Together with his mother, he collected Finnish landscape paintings of the nineteenth and twentieth centuries. Since 2004, he and his wife Iiris have collected international contemporary art. He lives in Helsinki and Berlin. Timo Miettinen worked in Germany and has remained closely connected to the country ever since. “In intellectual terms, Germany was always my second spiritual home. Now this project means I can build a bridge between Berlin and Helsinki, as I also aim to show Finnish artists not yet well known here.”

In parallel with the exhibition The Moment I Became a Collector..., Timo Miettinen is exhibiting works produced on site at Marburger 3 by Finnish artist Heikki Marila who received the Carnegie Art award first prize in 2011, and the Spanish artist Secundino Hernández.

In the entrance of the building, Berlin based artist Björn Dahlem shows a light installation entitled “Lokale Gruppe”. The structure of the extensive installation represents a strong contrast to the ornamental order of the staircase and the stucco originating in the era of the Gründerzeit.