Paintings from 1971 to 1980. The artist collected information, texts and reproductions from his fields of interest, which he organized in 200 folders as his own encyclopedia. The artist drew creative inspiration and formal elements from this pool. 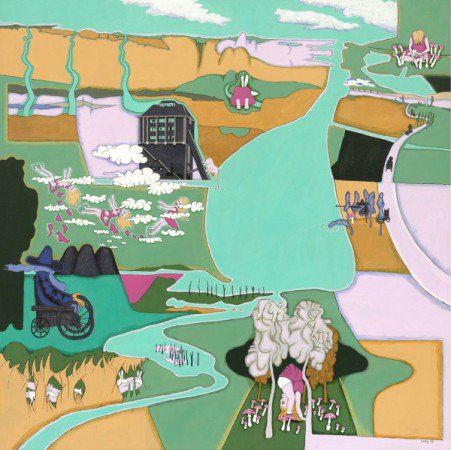 Klaus Liebig studied at the Art Academy in Stuttgart and lived in the Black Forest from 1957 to 1970. It was here that his artistic career began with restless, rhythmically structured landscapes and figurative paintings using a high degree of abstraction and structures reminiscent of cubism. Little by little, Liebig left the influence of Cubism behind him and found his own representational imagery.

As a man of many interests, Liebig systematically collected information, texts and reproductions from his various fields of interest, which he organized in circa 200 folders as his own encyclopedia. The artist drew creative inspiration and formal elements from this pool.

In the seventies, Liebig established contact with the artists Erró, Fahlström and Baruchello, who were close to him in spirit and, like him, were successful mavericks. Despite great differences, the work of these four individuals has much in common: the search for new expressive possibilities in figurative painting, the influence of American pop art and a narrative style reminiscent of comics. In 1975, the Lenbachhaus in Munich showed the exhibition Let‘s mix all feelings together with works by Liebig, Baruchello, Erró and Fahlström, which was subsequently shown in six other European cities, including at the Musée d‘Art Moderne de la Ville de Paris and at the Louisiana Museum in Humblebaek, Denmark.

Landscapes maintained a particular weight in Liebig‘s work. Lakes and rivers, meadows and forests, hills and valleys almost always determine the pictorial ground, yet do not form a spatial continuum. Constantly changing perspectives obscure the principle of compositional chaining of details, as does the partial identity of figure and ground. This is achieved through the partial elimination of contours and by using the same color for adjacent elements.

Also striking in some works is the „psychologization“ and „infantilization“ of people or topics, usually with an ironic twist: they come from a period during which Liebig was critical of psychology.

Especially in his early landscapes, it can be sensed that the experience of being within a landscape, to feel it in its essence, had a great impact upon him. The different styles of presentation – bird‘s eye view, geological composition, cartographic representation, anthropomorphic reproduction – correspond with the fractional representation of persons: figurines, mythological beings, carriers of meaning, real people.