The artist continue his on-going investigation into a whole host of issues, ranging from narrative self-reflexivity, analog apparatuses, measurement, and perhaps what can be best described as a metaphysical existentialism. 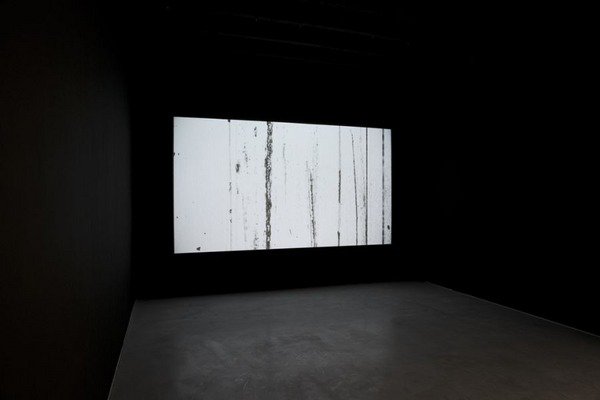 On the occasion of Gallery Weekend Berlin 2012 Galerija Gregor Podnar is pleased to announce its second solo exhibition of Alexander Gutke in Berlin.

Alexander Gutke will show new and recent works that continue his on-going investigation into a whole host of issues, ranging from narrative self-reflexivity, analog apparatuses, measurement, and perhaps what can be best described as a metaphysical existentialism.

The exhibition features a 16 mm film installation, a video, a sculptural installation, a wall sculpture, and a series of photographs. Auto-scope (2012) is a 16 mm film that depicts a looped voyage inside a projector and outside into an open, snowy landscape. The video 1-2-3-4 (2010) portrays a sporadic cascade of drum sticks falling onto a snare drum with no apparent rhyme or reason. The sculptural installation Folded into One (2012) consists of a couple of hundred of stacked boxes covered both on the inside and the outside with imagery of the universe, as if space were somehow modular and looped. The theme of the loop continues in the wall sculpture Measure (2011). This work is comprised of a brass Moebius strip, laser engraved with millimeter markings in the spirit of a flexible tape measure. 9 to 5, Stormgatan 4 (2012) is a series of digital photographic ink jet prints, which see the artist photographing the same spot on a wall throughout the course of a day, placing the resulting photograph on the wall and systematically replacing each subsequent image with a new one, such that the resultant photograph becomes a diary of the artist in his studio.