For her new work, The Parade (2011), Djurberg has created five captivating animations and an unnerving menagerie of more than eighty freestanding bird sculptures. Drawing on avian physiology, rituals of mating and territorial display, and the social phenomenon of flocking, she has assembled a fantastical procession of species all fashioned from modest materials such as clay, wire, and painted canvas. Music by Hans Berg. For her New Museum presentation, Barlow will create a new, site-specific sculptural installation in the Museum's fourth floor gallery. 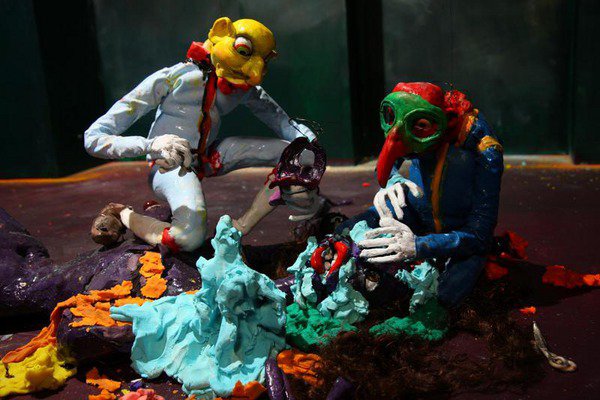 The New Museum is pleased to announce the third exhibition for its recently inaugurated ‘Studio 231’ series in the museum’s adjacent, ground-floor space at 231 Bowery. “The Parade: Nathalie Djurberg with Music by Hans Berg” will be on view from May 2–August 26, 2012. This is Djurberg’s most ambitious multimedia installation to date. Originally organized by the Walker Art Center, Minneapolis, Djurberg will adapt this spectacular In the hands of Swedish artist Nathalie Djurberg, animation becomes a medium for transgressive and nightmarish allegories of desire and malcontent. Since 2001, she has honed a distinctive style of filmmaking, using the pliability of clay to dramatize our most primal urges—jealousy, revenge, greed, submission, and gluttony. Set to music and sound effects by her collaborator, Hans Berg, Djurberg’s videos plumb the dark recesses of the mind, drawing sometimes disturbing connections between human psychology and animal behavior. Increasingly, the artists’ interdisciplinary collaborations have blurred the cinematic, the sculptural, and the performative in immersive environments that pair moving images and musical compositions with related set pieces. For new work, The Parade (2011), she has created five captivating animations and an unnerving menagerie of more than eighty freestanding bird sculptures. Drawing on avian physiology, rituals of mating and territorial display, and the social phenomenon of flocking, she has assembled a fantastical procession of species all fashioned from modest materials such as clay, wire, and painted canvas. These hybrid, sometimes monstrous forms speak to the artist’s recurring interest in physical and psychological transformation, as well as pageantry, perversion, and abjection. In the accompanying claymation videos, humans and animals alike act out upsetting scenarios of torture, humiliation, and masquerade, further mining the interplay of brutality and guilt at the heart of Djurberg’s work. Berg’s eerie film scores— Nathalie Djurberg, The Parade, 2011. Installation view: Walker Art Center, Minneapolis, 2011. Courtesy Walker Art Center, Minneapolis. Photo: Gene Pittman installation for the New Museum’s ‘Studio 231’ space.

composed of elements both found and invented—suffuse the entire installation, merging to form a unified soundscape. With these films, both artists have begun to conceive narrative in spatial terms as aspects of character, setting, sound, and action migrate from one story to the next across the exhibition space. The exhibition is curated by Eric Crosby and Dean Otto for the Walker Art Center and organized at the New Museum by Gary Carrion-Murayari, Curator.

Born in Lysekil, Sweden, in 1978, Nathalie Djurberg received her MFA from Malmö Art Academy in 2002, and since that time she has exhibited widely in solo and group exhibitions around the world. Most notably, in 2009 she presented her installation The Experiment in the exhibition “Making Worlds” at the 53rd Venice Biennale, for which she was awarded the prestigious Silver Lion for Promising Young Artist. In 2008, Djurberg participated in the New Museum’s “After Nature” exhibition curated by Massimiliano Gioni. She currently lives and works in Berlin with Hans Berg.

Hans Berg was born in Rättvik, Sweden, in 1978. He is a Berlin-based electronic music producer and self-taught musician. He began playing the drums in punk and rock bands at the age of fourteen. By fifteen, Berg started creating electronic music—which he has made ever since—when he purchased his first synthesizer and sampler. Berg and Djurberg met in Berlin in 2004. Since then, he has composed the music for all of her films and installations.

Nathalie Djurberg is the third artist featured in the New Museum’s new ‘Studio 231’ series, which presents commissioned projects in the museum’s adjacent, ground-floor space at 231 Bowery. The Museum inaugurated the series in October 2011 with a new installation and performances by Spartacus Chetwynd, followed by an exhibition by Enrico David. This new initiative will give international, emerging artists the opportunity to realize ambitious new works conceived especially for the space. These projects at 231 Bowery also seek to foster a new relationship between the artists and the public by allowing artists to create work outside the confines of the main museum building and in closer proximity to the energy of the street and to the creative space of the artist’s studio.

“The Parade” is made possible by the generosity of the Leadership Council of the New Museum. Additional support is provided by Martin Margulies and Heather and Tony Podesta. Support for programming at ‘Studio 231’ is provided, in part, by the Laurie M. Tisch Illumination Fund. Generous support for ‘Studio 231’ is provided by Ellyn and Saul Dennison, Mitzi and Warren Eisenberg, Susan and Leonard Feinstein, Hermine and David Heller, Lietta and Dakis Joannou, Toby Devan Lewis, and the Board of Trustees of the New Museum.

About the New Museum

The New Museum is the only museum in New York City exclusively devoted to contemporary art. Founded in 1977, the New Museum is a center for exhibitions, information, and documentation about living artists from around the world. From its beginnings as a one-room office on Hudson Street to the inauguration of its first freestanding building on the Bowery designed by SANAA in 2007, the New Museum continues to be a place of ongoing experimentation and a hub of new art and new ideas.

“Phyllida Barlow: siege” is the first New York solo exhibition of the work of British sculptor. For her New Museum presentation, Barlow will create a new, site-specific sculptural installation in the Museum’s fourth floor gallery. This exhibition is part of a series focusing on a single project or body of work within an artist’s larger practice. The series began last May with presentations by Apichatpong Weerasethakul and Gustav Metzger.

Barlow has been a seminal influence on British sculpture for the past forty years, having taught a generation of notable British artists. She began making work in the mid-1960s, breaking away from earlier British sculpture exemplified by the formal abstractions of artists such as Anthony Caro. Inspired by Arte Povera and American sculptors like Eva Hesse, Barlow embraced a mode of working that drew stronger ties between the sculpture and the artist’s body. She also took on a broader and more experimental approach to the materials she manipulates. Her works consist of disparate substances such as concrete, felt, wooden pallets, polystyrene, and fabric, often within the same work. These materials are a reflection of the urban environment in which she works and are often sourced directly from the streets. Barlow’s sculpture takes on an ephemeral, contingent quality as works assembled on site will often be broken down after an exhibition and recycled into future work.

Since the beginning of her career, Barlow’s sculptures have been appreciated for their playful formalism and the relationship they have to the built environment—often inspired by objects that direct or impede our movement through space. Barriers, scaffolding, and security fences are reinterpreted into rough-hewn constructions with exuberantly painted surfaces. Assembling her sculptures quickly and intuitively, they become distant memories of objects rather than faithful reconstructions. In her installations, Barlow scales her work to fully inhabit and transform a given architectural space. Ranging from intimately scaled objects occupying corners and corridors, to works that take on an imposing and overwhelming scale, her installations challenge and parody the heroic monumentalism of her predecessors. Barlow reveals that sculpture can accurately capture the joyfulness, absurdity, and transience of life.

Phyllida Barlow was born in 1944 in Newcastle-upon-Tyne, England. She currently lives and works in London, England. Barlow attended Chelsea School of Art, London, and then the Slade School of Fine Art, London, graduating in 1966. She taught sculpture in London art schools for over forty years, retiring in 2008. She has had solo exhibitions at venues including the Henry Moore Foundation, Leeds, England (1995), Baltic Centre for Contemporary Art, Gateshead, England (2004), BAWAG Contemporary, Vienna, Austria (2010), and the Kunstverein Nürnberg, Germany (2011). Barlow has participated in group exhibitions at the Kunstmuseum Basel, Switzerland, Bergen Kunsthall, Norway, Haus der Kunst, Munich, Germany, and with Nairy Baghramian at the Serpentine Gallery, London. She is the recipient of the 2012 Aachen prize and will have an exhibition at the Ludwig Forum, Aachen, Germany, also in May 2012.