The Fifth Season. In her series Koether updates iconic paintings with a visual vocabulary of erratic, graffiti-like lines in evocative hues of pink, blood-red tones and metallic paint. 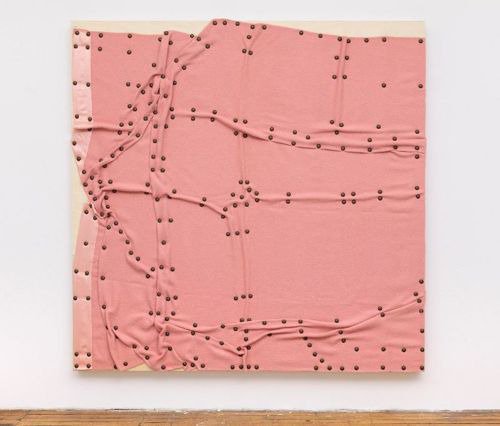 Bortolami Gallery is pleased to present Jutta Koether's first exhibition with the gallery, The Fifth Season, from May 2nd to June 16th with a reception for the artist on May 2nd from 6 to 8pm. The Fifth Season will include seven large-scale paintings and one small-scale painting. Integral to the exhibition is a second installment of her work The Seasons, which is currently on view at The Whitney Biennial, the remaining three paintings incorporate garland imagery. There will be a particular "ground plane" completing the arrangement of works in the gallery.

In her series Koether updates iconic paintings with a visual vocabulary of erratic, graffiti-like lines in evocative hues of pink, blood-red tones and metallic paint. The activity on the ground creates a heightened experience for the viewer, providing an alternate, almost bucolic setting while viewing two-dimensional landscape-like paintings. The Seasons and The Fifth Season concurrently on show in New York invite the viewers to compare the differences between the installation at the gallery and at the museum, as well as the ways we perceive the seemingly similar bodies of work. Both exhibitions reference the seventeenth century painter Nicolas Poussin's The Four Seasons, which illustrates the seasons with classical landscapes and biblical imagery. Koether is interested in how the materiality and context in which a work is displayed affects viewers' responses and inferences.

Another central theme to the exhibition is the "Mad Garland," which references the recurrent garland motif in art history, particularly in ancient Roman wall paintings depicting Dionysian performances. Koether includes imagery of garlands to highlight the performance aspect of painting and to illustrate a decorative element that has accumulated various symbolic meanings over time. On Saturday May 5th Koether's "acts" will take place at the gallery from 6-9pm. The artist considers the relationship between painting and performance as mutual and dialectic, where the process of painting enables performance and vice versa.