Launched in 2010 by 7 galleries from NY and London, Seven is an initiative committed to presenting artworks on their own terms and providing a personal way to engage the viewer. The exhibition presents solo projects by one artist from each of the participating galleries. 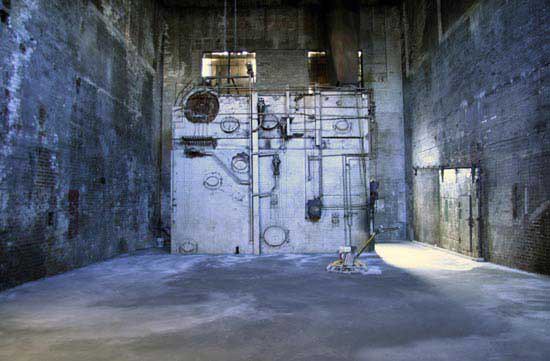 Expanding its model of a collaborative platform for presenting and experiencing contemporary art, SEVEN will hold its first New York area exhibition in Williamsburg, Brooklyn at The Boiler, April 28 - May 20, 2012. Launched in 2010 by seven galleries from New York and London (BravinLee programs, Ronald Feldman Fine Arts, Hales Gallery, Pierogi Gallery, Postmasters Gallery, P.P.O.W, and Winkleman Gallery), SEVEN is a unique initiative committed to presenting artworks on their own terms and providing an intimate, personal way to engage the viewer.

Seven @ SEVEN will present solo projects by one artist from each of the participating galleries. Featuring major installations, paintings and sculptures, the exhibition will fill The Boiler's cavernous space in a co-curated, dynamic presentation. This emphasis on cooperation rather than competition is a founding principle of SEVEN that truly puts the art viewing experience ahead of all other considerations.

Below is a preview of highlighted artists:

BravinLee programs is pleased to present “Skin”, a large scale, site-specific sculpture installation by Emil Lukas. Emil Lukas’ work straddles painting and sculpture. Working with and exploiting simple materials in unconventional ways, Lukas’ work is like a forensic investigation. The aesthetic character of the art object is the byproduct of the artist’s working process seeking to reveal the evidence of the material’s essential nature. Reviewing an exhibition at Gorney Bravin + Lee, Ken Johnson wrote in The New York Times: “Emil Lukas's mixed media paintings might best be seen as rudimentary thought experiments. Like a boy scientist, Mr. Lukas keeps wondering where this or that improbable process might lead.” For The Boiler Seven@Seven project, Lukas will employ a simple, haiku-like process and transform a fundamental feature of the existing Boiler space and alter its distinctive character. He will preserve much of the original form and volume, of the space while obscuring and obliterating details of its recognizable aspects. “Skin” by Emil Lukas is produced in cooperation with Sperone Westwater Gallery.

Hales Gallery will present Chariots of the Gods, 2009 by Hew Locke. The work draws on Locke’s memories of the Museum of Mankind, London, an eclectic museum, which in its time focused on anthropology. The piece incorporates key exhibits from this museum including the famous Moai figure from Easter Island known as Hoa Hakananai’a, Benin bronzes, Buddhist masks, Inca mummies and Aztec serpents. Locke absorbs and reconfigures this exotic imagery turning them into a heretical motif that is both instantly recognisable and otherworldly. This mythical Coat of Arms mimics those of ex-colonial countries who adopted this Western way of identification.

Pierogi Gallery will present Dawn Clements who was born in Woburn, Massachusetts. Her powerful use of Sumi ink and ballpoint pen on small to large-scale paper panels is her primary medium and scale. She often cuts and pastes paper together to edit and compose a completed drawing, adding paper as necessary to create the desired scale. Through her active process, which is almost performative, the paper becomes distressed with folds, wrinkles, and seams.

She describes her work as "a kind of visual diary of what she sees, touches, and desires. As I move between the mundane empirical spaces of my apartment and studio, and the glamorous fictions of movies, apparently seamless environments are disturbed through ever-shifting points of view."

Postmasters will present artworks by Diana Cooper. Diana Cooper is a Brooklyn based artist represented by Postmasters since 1998. Defying easy categorization, Cooper is known for creating dense, large scale "hybridized constructions," that transcend the childlike doodling of repetition, multiplication and absent-mindedness to create spatial units where spontaneity and control, chaos and order, joy and seriousness coexist. Recently Cooper began incorporating photographs into her works and the wall installation at the Boiler will combine fragmented photographs with three-dimensional elements, abstracted, but projecting an inherent sense of oppressive systems, networks, circuitry and surveillance.

"Cooper with her absurdist playfulness and Orwellian intimations, appropriates for herself - and her metamorphous creations - a unique place in contemporary abstraction"
- Lilly Wei, Line Analysis, Art in America, April 2008

P•P•O•W When you first went to "The Boiler" you saw a male model dressed up as a werewolf. To his left, sitting on a rug, two blonde children reclined beside a blonde female model. All three of their faces were covered in dark make-up meant to resemble dirt or coal dust. The children played with a ball and chain which was attached to the blonde female model’s ankle. During the photo shoot one of the children must have made a mistake in the way they were coached to pose because a woman in a polar fleece vest moved from behind the camera towards the child and said “You ruined the photograph.” P.P.O.W is presenting a site-specific installation by Ben Gocker entitled Bad Dreams.

Ronald Feldman Fine Arts will feature knit sculptures by Gil Yefman whose inventive objects challenge the established order, questioning the validity of accepted norms within a changing world. He creates fantastic worlds in which characters with elusive sexual and political identity serve as alternative cultural heroes. In Blood Moon (2010), conceptualized while reading Rainer Maria Rilke's “Letters to a Young Poet,” Yefman parallels the possibility and nature of male menstruation and birthing through the creation of an artwork, with the fullness of the female period and birthing.

Winkleman Gallery will present a brand new sculpture by artist Andy Yoder. Known for his public commissions and large-scale, poetic works created via a thought-provoking matching of object and material, and frequently touching on the darker subtexts of our relationships with domestic objects and the symbols of suburban living, Yoder presents at SEVEN a hanging tire swing sculpture. The idyllic symbol of youth and leisurely summers is covered in fresh yellow wild flowers and suspended from a strong rope, but upon closer inspection reveals itself to be only half a tire, flat against a mirror, and it’s only an illusion that makes the swing appear usable. Andy Yoder has exhibited widely throughout the United States and Europe. In addition to two invitations to the American Academy of Arts and Letters annual exhibitions (2003 and 2007), he has exhibited at the Brooklyn Museum, the Reykjavik Art Museum, and the Brattleboro Museum.

For more information, please email us at info@seven-miami.com or contact Joe Amrhein at Pierogi Gallery,
718-599-2144.