To navigate, in a genuine way, in the unknown...The exhibition spans over 16 years of his work and features 5 of the artist's film installations, several photographic series, and video-based works. With a research-intensive approach, Koester traces forgotten journeys and narratives, obscure phenomena, altered forms of consciousness, the history of occult movements, and the legacy of social experimentation. 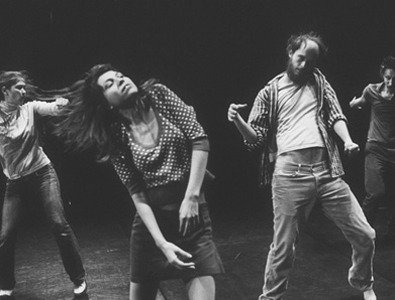 April, 2012 (Cambridge, MA)—The MIT List Visual Arts Center presents the first major U.S. museum exhibition survey of Danish-born, New York-based artist Joachim Koester. Koester’s work explores history, perception, consciousness, and the body through photography and film. The artist’s interest lies in the limits of rationality and the area of “what can be told and what cannot be told.” With a research-intensive approach, Koester traces forgotten journeys and narratives, obscure phenomena, altered forms of consciousness, the history of occult movements, and the legacy of social experimentation. The exhibition spans over sixteen years of Koester’s work and features five of the artist’s film installations, several photographic series, and video- based works.

In Koester’s 16mm film Tarantism, 2008, a group of professional dancers enacts an ecstatic dance of uncontrolled and compulsive movement that according to folklore, could ward off symptoms caused by the poisonous tarantula’s bite. In Message from Andrée, 2005, Koester traces the journey of Salomon August Andrée, a Swedish polar researcher and adventurer who perished in a failed attempt to reach the geographic North Pole by hydrogen balloon. Several decades later, when the remains of the expedition were found, a series of photographic negatives taken during the three-month journey through the ice were discovered, which Koester re-photographed to create his film. For I myself am only a receiving apparatus, 2010, Koester staged and filmed a performance in the reconstruction of Kurt Schwitters’s famed Merzbau, 1923-1937, the physical movements of the performer suggested by the semi-abstract surfaces of the architecture. In To navigate, in a genuine way, in the unknown necessitates an attitude of daring, but not one of recklessness (movements generated from the Magical Passes of Carlos Castaneda), 2009, an actor performs the exercises described by the anthropologist Carlos Castaneda in his 1989 book Magical Passes. According to Castaneda, these were secret shamanic gestures meant to enhance one’s ability to navigate “the dark sea of awareness.” Koester’s film work Variations of Incomplete Open Cubes, 2011, presents a choreography of Sol LeWitt’s eponymous variations performed through gestures. For Numerous Incidents of Indefinite Outcome, 2011, the words of cult horror writer H.P Lovecraft become source material for a computer based program that randomly generates new word groupings and possible narratives.

The two-channel video One + One + One, 2006, visits a house in Cefalù, Sicily, that once served as a communal home for the occultist Aleister Crowley and his group of followers known as the Abbey of Thelema. The exhibition also features Koester’s series of photographs Morning of the Magicians, 2005, which depicts the murals and interior of the crumbling, now abandoned villa.

Koester’s conceptual and experimental approach is further revealed in other photographic works that expand conceptions of historical, narrative, and perceptual time. In The Kant Walks, 2005, Koester recreates the daily stroll of philosopher Immanuel Kant through his native Königsberg in photographs and texts, while retelling anecdotes of the nightmares that haunted the aging philosopher. Another historically based work, Magic Mirror of John Dee, 2006, references 16th century scientist John Dee’s attempts to communicate with the dead, a document of a time when science and magic were intertwined.

In his early series of twelve photographs Day for Night, Christiana, 1996, Koester uses the technique cinematographers use to film night scenes in daylight, in order to present the Danish commune Christiania—a 17th century military base repurposed in the 1970s—through an artificial blue haze. Other photographic works in the exhibition include a depiction of the Barker Ranch, the home of Charles Manson and his followers from 1968-69 until their arrest for the gruesome Tate LaBianca murders; and From the Secret Garden of Sleep, 2008, a depiction of several strains of home-grown cannabis, “consciousness, for better or worse, engraved in the very flesh of the plant, as a consequence of desire, politics, and legislation.”

Support for Joachim Koester: To navigate, in a genuine way, in the unknown... has been generously provided by the Danish Arts Council Committee for International Visual Art; the Royal Danish Embassy; Greene Naftali Gallery; the Consulate General of Denmark, New York; the Council for the Arts at MIT; the Massachusetts Cultural Council; and the Office of the Associate Provost at MIT, with special thanks to the MIT List Visual Arts Center Advisory Committee and the Friends of the List.

In 1950 MIT established the Hayden Gallery which was located in the Charles Hayden Memorial Library. The gallery served as a venue for a program of changing exhibitions. In 1985 the Hayden Gallery was renamed the List Visual Arts Center in recognition of a gift from Vera and Albert List that relocated the gallery to its current location on the ground floor of the Wiesner Building.

Over the years the MIT List Visual Arts Center has become highly respected as one of the most significant university art galleries in the country for its innovative, provocative, and scholarly exhibitions and publications. Just as MIT pushes at the frontiers of scientific inquiry, it is the mission of the List Visual Arts Center to explore challenging, intellectually inquisitive, contemporary art making in all media. In addition to presenting 4-6 exhibitions annually, the List Center presents a broad arrange of education programs in conjunction with its exhibition programming. The Center maintains and adds to MIT’s permanent collection of 3,500 artworks that includes dozens of publicly sited sculptures and hundreds of paintings, prints, photographs, drawings and sculptures located throughout MIT’s campus. The List Center is also responsible for commissioning new works for the MIT Public Art Collection through the MIT Percent-for-Art program, and organizing and administering the Student Loan Art Program, which lends over 500 works of art annually to MIT undergraduate and graduate students.