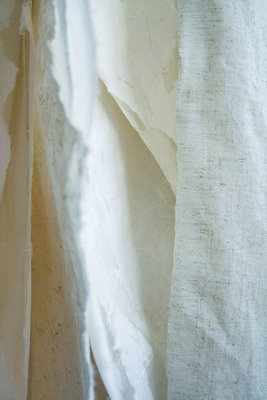 Trained in modern European painting and influenced by the Chinese ink tradition, Cao Jigang, Lin Yan, Wei Jia, Xiao Bing and Yuan Zuo explore the borders between abstraction and realism, painting and sculpture, symbolism and literalness, improvisation and regimented discipline. While ostensibly nebulous, the artworks included in the show, simultaneously appear startling; familiar yet strangely unsettling providing an enlightening flicker of displacement. All five artists are graduates of the most advanced and prestigious, yet government sponsored art academy in Beijing, the China Central Academy of Fine Arts (CAFA). They’ve straddled the categories of traditional and contemporary producing works that, while employing time-honored methods and materials are meaningful to the contemporary world.

Lin Yan expresses her political pre-occupations through xuan paper that in itself has a rich cultural history dating back to the Tang Dynasty when it was used for calligraphy, painting and book printing. She casts it to create bricks that make up the grid in a distressed American flag, or she tears it to symbolize a cultural deterioration, or overwhelming consumerism.

Wei Jia’s collage works with hand made paper relate to calligraphy with which he embellishes his work’s surfaces as well as its layers to explore his cultural roots. Wei incorporates both the purposeful and accidental effects of his paper and paint within its layers, either calligraphic text with meaning or lettering for its own sake.

Cao Jigang’s landscapes, while addressing historic entities, simultaneously fragment reality at times by offering detailed views or by dividing it into panels. While ostensibly appearing like the 11th century Monumental Song mode of monochrome because of its quiet color, Cao’s landscapes are more about the cun or contour strokes used to define mountains, hills, and valleys that act as cyphers of identity.

Fragmentation, separation and Heraclitan flux or eruption can partly describe the work of Xiao Bing. However, through all of this seeming abstract chaos it is possible to make out familiar scenes such as the Great Wall or other historic landmark. This ‘misty screen’ as he calls it that overlays his buildings, results in a blurry, haziness much like that used by Turner in his Vortex-like compositions.

Yuan Zuo is a scholar and painter familiar not only with his own culture’s historic past but also with that of the west. However, he is an independent thinker as seen through his art statement who claims that “the subject of the painting should be determined by the artist and be devoid of outside influences.” This statement is borne out by Yuan’s abstract works that although engage the gesture in their expressionist tendency, are coloristic symphonies.

These five artists Cao, Lin, Wei, Xiao and Yuan have been put together for this show not only because they’re graduates of the same academy, but also for their retention of aspects of their original culture while working within a globalized world. This is a somewhat difficult ambition, as a discourse or dialog with multiple cultures is somewhat like the immigrant experience whose adoptive country offers an alternative place to live, yet doesn’t understand his/her originating social context. Nevertheless, these five artists have successfully conveyed their personal views while maintaining their cultural integrity to sensitively express their experience within an international world.