Inexistence. By means of tools like mirrors, video or scenographic installations the artist converts familiar spaces into a new sphere; the daily life architecture becomes a stage where the viewer is the leading actor of a new experience. 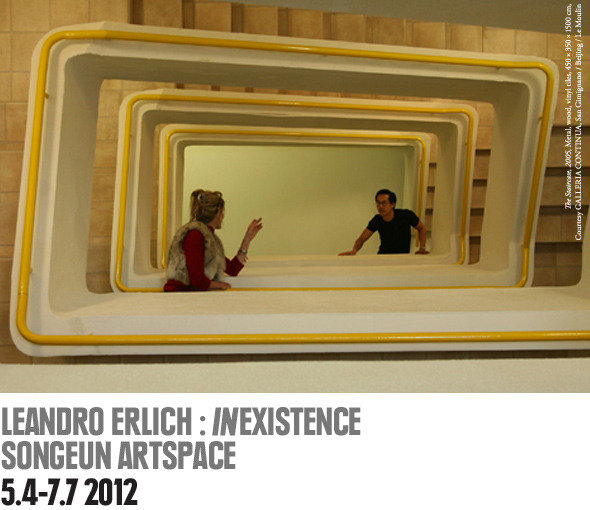 "Leandro Erlich : Inexistence" is the first solo exhibition of the artist in Korea. Argentine-born Leandro Erlich is a prominent artist in the international art scene and has been widely known for his unique diversified installations that confuse our perception. Leandro Erlich is the second artist featured in SongEun ArtSpace's annual foreign solo exhibition program, which selects and invites a promising and internationally recognized foreign artist who has not yet been introduced deeply in Korea.

By means of tools like mirrors, video or scenographic installations Leandro Erlich converts familiar spaces into a new sphere; the daily life architecture becomes a stage where the viewer is the leading actor of a new experience. Through this experience, where the perception of reality is altered, the viewer makes the interpretation of the work and figures his own role in it.

The title of this exhibition ’Inexistence’, by definition,means ‘doesn’t exist’. On the other hand, when there is spacing between 'in' and 'existence', it means part of existence. This pun implies how the artist shows the ambiguity between the real and illusion. Each floor of the exhibition shows Erlich's exploration of the perception and involvement from the converted reality in his works.

The Staircase, an architectural device that we walk up and down is built horizontally on the 2nd floor at Song Eun. By collapsing the function, we perceive the staircase in a totally different way. The staircase becomes an obsolete object that anticipates the path the public will take going up the floors the exhibition takes place. He drew its inspiration from an iconoclastic scene from Hitchcock’s Vertigo where looking down the staircase plays a major significance in the plot of the film.

On the third floor, Changing Rooms, shows endless spaces that are reflected in full-size mirrors. However, there are only mirror frames maintaining bilateral symmetry so viewers expecting a mirror become disoriented in a maze of empty rooms. The lost of our own reflection in a mirror is under Erlich’s point of view a symbolic experience that deals with identity, vanity and existence.

The Chairman's Room (2012) consists of a symmetrical space divided into halves. A large glass separates the rooms and the viewer sees his reflection appear like a phantom. Inspired by Le Cabinet de Psy (The Psychoanalyst's Cabinet, 2005), where the setting was composed by typical psychoanalyst's furniture The Chairman’s Room (2012) represents the office room of the of late Yoo, Sung-Yeon, who was the founder of SongEun Art and Cultural Foundation and SAMTAN Co., Ltd. The Chairman’s Room (2012) brings a new dimension to its predecessor. Relating the experience to our relationship with mortality and the memory of those who passed away. SongEun ArtSpace was named after former Chairman Yoo's nom de plume and this year marks the 50th anniversary of SAMTAN Co., Ltd. The Chairman's office is displayed as it once was in reality.

Finally the last work is The Doors, which shows a very bright light coming from beneath the doors as if to imply that someone is in the lit room on the other side. However, when the visitors open the doors, they are faced in an empty and dark space. Erlich wished to end with this piece because he states, "··· it is like the ultimate thing. Opening the door to 'nothing’ more".

This exhibition includes a film of Erlich's highlighted works and an interview at SongEun ArtSpace.

About the Artist
Leandro Erlich was born in Buenos Aires, Argentina, in 1973 and developed an artist career fundamentally during the Core Program, an artist residency at the MFA in Houston, Texas between 1998 and 1999. Erlich continued to show at the Centre d’art Santa Monica, Barcelona, 2003; the Centre d’ art Contemporain Le Grand Café, Saint Nazaire, 2005; the MACRO, Rome, 2006. He represented Argentina at the 49th Venice Biennale in 2001 and contributed to the major art biennials including Whitney Biennial, NY, 2000; Shanghai Biennial, 2002; Busan Biennale, 2002; Seoul International Media Biennale, Seoul, 2006; 51st Venice Biennale, 2005; Liverpool Biennale, 2008. His works are included in private and public collections including the Tate Modern, London; 21st Century Museum of Contemporary Art in Kanazawa, Japan; MACRO, Rome as well as other prominent venues around the world. He works and lives in Buenos Aires, Argentina.