Closed because of the goings-on

Narcisse Tordoir has chosen for this exhibition to gather five artists in residence at Rijksakademie between 2010 and 2012: Olga Balema, Michiel Ceulers, Jean-Charles de Quillacq, Ruben Grilo and Annaik Lou Pitteloud. 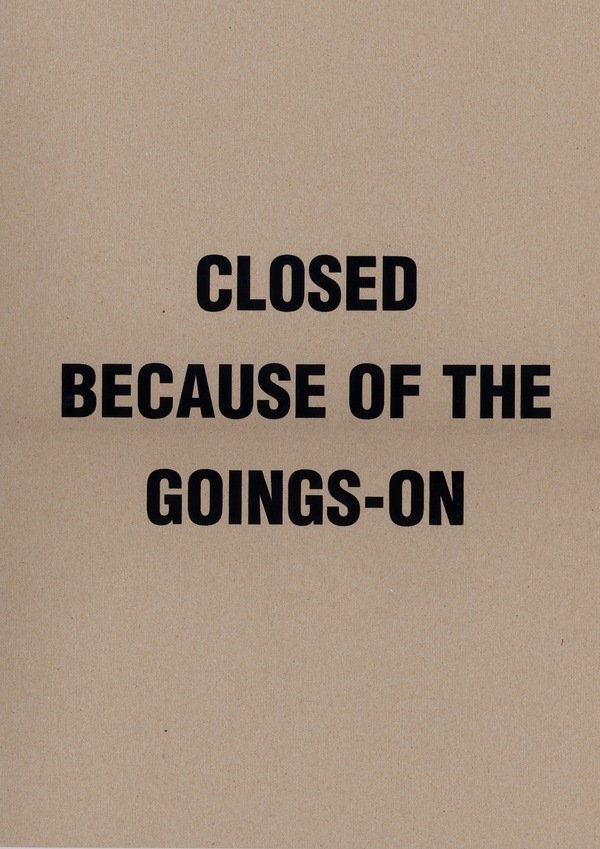 galerie dukan hourdequin is pleased to present Closed because of the goings-on (12 May – 16 June 2012) curated by Narcisse Tordoir (Belgian artist represented by the gallery and advisor at Rijksakademie van beeldende kunsten in Amsterdam for 25 years).
Narcisse Tordoir has chosen for this exhibition to gather five artists in residence at Rijksakademie between 2010 and 2012: Olga Balema, Michiel Ceulers, Jean-Charles de Quillacq, Rubén Grilo and Annaïk Lou Pitteloud.

Olga Balema (USA)
Born in 1984
« Positive thinking: actions speak louder than words. Growing and full of life force the leggings are alive without legs. Full of action, moving past the occasional gargoyle right into the brain. I’m excited about prospects of being organized because I’m in a better mood because I’m moving. Flowers are sentimental and there were a lot of these leggings made. When I wear them I will feel connected and the posture shared. This joy is collective. Let’s feel what I feel together. »

Michiel Ceulers (Belgium)
Born in 1986
Michiel Ceulers’ paintings investigate the medium of paint. At first these inconvenient, difficult to read, uncompromising and very diverse paintings are hard to grasp but on a second and third inspection these small, rather dirty painting are very precise and sharply handled, referencing previous historical styles. The dirty marks, thumb-prints, ripped and badly stretched canvases are integral to the work: he is not interested in beautiful or representational pictures, he is simply analyzing shapes in colours, brushstrokes and light. Once the paintings have left the confines of his studio they cease to be in a constant state of flux and the finally become.

Jean-Charles de Quillacq (France)
Born in 1979
Jean Charles de Quillacq plays combinatory games by forcing different shapes and materials to make contacts, often in a unnatural promiscuity without anything ever merging. This idea of closeness is coupled with resemblance, as in a family resemblences, because de Quillacq often roughly reproduces or imitates his previous works for generating new ones, mimicking the lineage of a fake genetic family. Sexual reproduction is not the only organic process that the Quillacq’s works recall, since many of his shapes refer to the digestion and its converted substances. Moreover, his sculptures are hardly fixed and seem to result from simple and daily gestures.

Rubén Grilo (Spain)
Born in 1981
Using a diverse variety of media, such as PowerPoint presentation, archive material, found objects or laser projected animation. Ruben Grilo explores the notion of art as pure information. The main point of departure is the tradition of conceptual art, but stripped of nostalgia. His work often takes the form of installations whereby complexity and the non-communicative use of language are as important as the narrative involved.Grilo’s installations commonly ask the viewer for a primary definition of «context», diverting elements both from inside and outside, mirroring cultural values and challenging its own objectivity.

Annaïk Lou Pitteloud (Switzerland)
Born in 1980
Through a variety of media the work of Annaïk Lou Pitteloud articulates critical reflections on cultural and social problematics. By using minimal forms to suggest a narrative, it refers to the art historical context as a flexible grid in which these reflections can be invested.
Consequently this nonlinear practise allows the work to leave an empty centre that can be freely filled in by the viewers. The correlation of pieces exhibited during the RijksakademieOPEN 2011 mainly comments on the parameters of art production, the use of idleness and the means of content distribution.