A Bigger Picture. Bright landscapes inspired by his native county of Yorkshire form the core of this exhibition which brings together around 150 works-oil paintings, charcoals, iPad drawings, sketchbooks and digital videos-most of which have been created in the past 8 years. The show also illustrates the extent to which the depiction of the natural environment has been present throughout the artist's career, even when other subjects were the focus of his output. 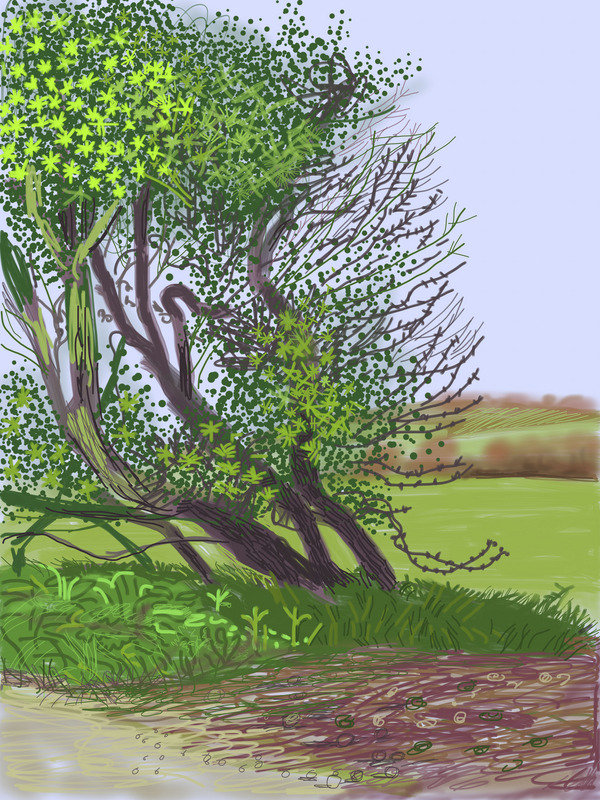 Organized by the Royal Academy of Arts in collaboration with the Guggenheim Museum Bilbao and the Museum Ludwig, Cologne, David Hockney: A Bigger Picture is the first major exhibition held in Spain to celebrate the crucial role landscape plays in the career of this artist, considered the most important living British painter.

Bright landscapes inspired by his native county of Yorkshire form the core of this exhibition which, with Iberdrola’s sponsorship, brings together on the Museum’s second floor around 150 works—oil paintings, charcoals, iPad drawings, sketchbooks and digital videos—most of which have been created in the past eight years. This exhibition offers a unique vision into Hockney's creative world and demonstrates his enormous capacity to represent nature using different techniques, as well as revealing his attachment to the landscape of his youth.

The exhibition also illustrates the extent to which the depiction of the natural environment has been present throughout the artist's career, even when other subjects were the focus of his output. A selection of works from 1956—during his student days in Bradford—until 1998 contextualizes Hockney’s later landscapes and reveals his early preoccupation with the representation of space and his use of color and manipulation of perspective to reflect the natural world.

One of the large, petal-shaped galleries designed by Frank Gehry houses Hockney's early works, which come from different public and private international collections and date from the late 1950s, while he was still a student, and the 1960s, such as Flight into Italy – Swiss Landscape (1962), a stylized representation of Alpine peaks. Exhibited alongside them are two of his famous photographic collages from the 1980s, Grand Canyon Looking North, Sept. 1982 and Pearblossom Highway, 11–18 April 1986 # 1, a work in which a road draws the viewer into the painting, showcasing Hockney’s experimentation with perspective and the representation of pictorial space in Cubism.

This same space with curved walls features his two paintings of the Grand Canyon, made in 1998, including the spectacular landscape A Closer Grand Canyon (1998), which is more than seven meters long. From the same year is Garrowby Hill (1998), a work created from memory in the studio after his return to Yorkshire in 1997 to spend time with his friend Jonathan Silver, who was terminally ill and had always supported his career. The drive between his mother’s house and his friend’s deathbed in the town of Wetherby familiarized Hockney further with the landscapes of his youth and inspired a deep interest in and affection for its features.

The Museum’s classical galleries, the starting point of the exhibition tour, display six series of works created between 2005 and 2009 that reveal Hockey’s deep curiosity and energy in embracing the myriad possibilities of landscape art, both when painting from observation and when using his memories and imagination in the studio. As the artist said, “We see psychologically” through the filter of our personal memories.

The first gallery houses a large group of small-scale oil paintings and watercolors made by the artist in 2004 and 2005 directly from observation. They were painted following the publication in 2001 of Secret Knowledge: Rediscovering the Lost Techniques of the Masters, in which he argues the enormous influence the camera lens had on painting from the fifteenth century onwards.

When he returned to painting after this period of investigation, Hockney deliberately rejected the camera’s influence and started to paint directly from observation. It was an extraordinarily prolific period in which the artist depicted numerous landscapes in Yorkshire, such as Path Through Wheat Field July (2005), Woldgate, 27 July 2005 (2005) and Fridaythorpe Valley, August 2005 (2005), which can be seen in this first gallery.

Also on display along with his watercolors and oil paintings is the representation of a small farm track that the artist refers to as “The Tunnel” in East Yorkshire. The road or track is a strong motif in his recent landscapes and is also reminiscent of some of his early paintings.

The artist's emotional involvement with the landscape of his childhood and youth is also clear in the series of works The Woldgate Woods and Thixendale Trees created between 2006 and 2008 and on display in the Museum’s second classical gallery. In these two groups of work Hockney employs the discipline of working in a series, and by doing so focuses attention on the landscapes changing conditions and the subtle modulations of light

The last gallery shows a representation of the cycle of nature in full through a series of works created by Hockney from both observation and memory and imagination in the studio: from the group called Hawthorn Blossom, which anticipates the arrival of spring through the flowering of the hawthorn, to the Trees and Totems series, in which works such as Winter Timber (2009)—more than 6 meters wide— show lifeless felled trees.

The same space also houses a small selection of charcoal drawings of trees and “totems” (stumps) which the artist painted directly from observation and to which he turned in order to recreate the same subject in the studio.

The Arrival of Spring

Dominating one of the Museum’s massive, irregular galleries is the monumental The Arrival of Spring in Woldgate, East Yorkshire in 2011 (Twenty-Eleven), which allows observers to feel how the excitement of this season emerging around them. This glorious tribute to nature is an installation consisting of one large 32 canvas paintings, surrounded by 51 iPad drawings printed out on paper, all of which record the transition from winter through to late spring on a small road in East Yorkshire and reveal Hockney’s experience in designing opera sets.

The three paintings of Woldgate that are also on display in this gallery were painted in the studio from the artist's memory and focus on what Hockney himself considered, without judgment, a “small subject”, but one in which a certain dramatic sense of nature can be perceived.

The Sermon on the Mount

From curving walls to another of the Museum’s most impressive spaces, the stunning oil painting entitled A Bigger Message (2010), which is more than seven meters long, envelops the viewer. In December 2009, during a visit to The Frick Collection in New York, Hockney was attracted by the work The Sermon on the Mount, painted in 1656 by French artist Claude Lorrain. The fascination he felt for this work lay not in the biblical scene that it portrays, but in the spatial effect Claude achieved.

Subsequently, the artist made a life-size transcription of the painting and then a number of studies, some faithful to the original and others more stylized. The project culminated in the 30-canvas oil painting entitled A Bigger Message. Although much larger than The Sermon on the Mount, this work maintains the structure of Claude’s, but in applying his own technique, Hockney transforms the subject into a monumental work, one “message” of which is the artful depiction of space.

The same interest in capturing the sublime landscape Hockney found in Claude Lorrain’s work also prompted the artist to take the Yosemite National Park in America as a subject. Hockney was already familiar with this outstandingly beautiful natural area, but only following his prolonged focus on the Yorkshire landscape did he consider it a possible subject for his large works. His mastery of the iPad enabled him to capture the dramatic light and weather conditions swiftly and adapt his technique to allow for the increased size of the printed images, which represent the most recent and largest works in the exhibition, on view in this space.

The sketchbooks provide a wonderful insight into both the inspiration behind many of the paintings in the exhibition and their composition.

The exhibition also shows the artist's interest in new technologies throughout his career: from his early use of the Polaroid camera, his innovative incorporation of the color copier and use of the iPhone and iPad; in addition, this interest is especially evident in a number of new films produced with up to 18 cameras, which are presented on multiple screens, showing the use of the techniques developed in his paintings in video format and transporting the visitor on a bewitching journey through David Hockney’s eyes.

Born in Bradford in 1937, David Hockney attended the Bradford School of Art before entering the Royal College of Art, where he remained between 1959 and 1962. His classmates included Peter Blake and R. B. Kitaj. Hockney's celebrity came while he was still a student, when his work was included in the Young Contemporaries exhibition, which marked the rise of British pop art. He visited Los Angeles in the early 1960s and settled there soon after. He is often associated with Southern California and the many works he produced there over several decades. David Hockney was elected to the Royal Academy in 1991.

David Hockney: A Bigger Picture highlights Hockney’s curiosity and energy when adopting the myriad possibilities of landscape art. Hockney works from observation and from memory and imagination, supported by visual and technological tools. His mastery of various media and always innovative approach allows him to create images that are powerful evocations of space and landscape and achieve “a bigger picture”. His deep knowledge of the masters of the past and their influence on his work are equally evident in the exhibition, as demonstrated by the use of scale to extend the view of the landscape. Above all the exhibition places Hockney firmly in the tradition of celebrated British landscape painters such as Constable, who are associated with a particular area of great natural beauty.

David Hockney and his creative process

To complement the exhibition, the Museum’s second floor will host several educational areas where visitors can get a closer look at David Hockney’s work process. A first space will show a series of educational materials and texts on his main work techniques, from watercolors and photography to the most innovative iPad applications. Completing that space is a sample of opera set designs, a facet of his output since the 1970s, and the audiovisual entitled “A Bigger Picture”, directed by Bruno Wollheim. A second space will offer an extensive bibliography of the artist and his work for consultation.

On the occasion of the exhibition, the Museum has published a fully illustrated 300-page catalogue that examines Hockney’s landscapes and focuses on his latest works inspired by the Yorkshire countryside. The book is a vibrant, joyous journey through the natural settings Hockney recreated in very different media. The exhibition curators, Marco Livingstone and Edith Devaney, and Tim Barringer, Martin Gayford, and F. Xavier Salomon have contributed essays to this volume, which allow a closer look at the new modes of representation of space the British artist has developed.

Conference: An introduction to David Hockney’s Yorkshire landscapes
May 15

Edith Devaney, curator of the Royal Academy, London, and co-curator of the exhibition, will offer an overview of the show, presenting the main themes the British artist reflects on in his landscapes and analyzing his re-encounter with his birthplace, Yorkshire. She will also speak on the origin of the exhibition project and its development and provide additional information on David Hockney’s work process and the use of technology throughout his career.

Coinciding with the David Hockney exhibition, the Museum will hold an introductory course on the possibilities and uses that iPads offer for graphic entertainment and creation. This course, which is for the general public and will be given by Oscar López Martín, is being offered as a sampler of possibilities. Each participant must bring his or her own iPad.

Shared Reflections
Professionals from the Museum’s Curatorial and Education Departments will offer a complementary vision of the exhibition.