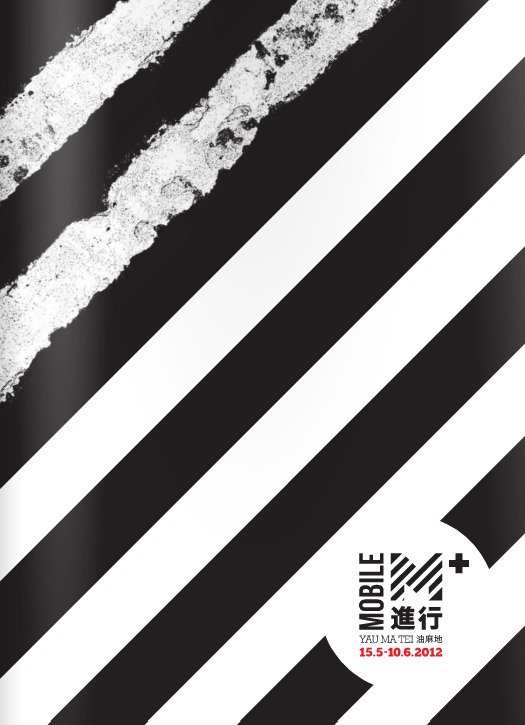 Showcasing Contemporary Hong Kong Art during ART HK 12 (19 April 2012, Hong Kong) In May 2012, the West Kowloon Cultural District Authority (WKCDA) will present Mobile M+: Yau Ma Tei, the first of a series of major pop-up exhibitions which will be programmed before the planned completion of M+, the museum for visual culture, in the arts hub in late 2017.

Mobile M+: Yau Ma Tei is a multi-sited exhibition of six installations around Yau Ma Tei, a former fishing village and a historic district within West Kowloon, by seven major Hong Kong-based visual artists. The exhibition will open on Tuesday 15 May 2012, just days before ART HK 12.

Dr. Lars Nittve, Executive Director of M+, said, “A museum is not the same as its building and its exhibits should break through its walls. One of our ambitions for the future is for the whole of West Kowloon to vibrate with art. Art can make a difference in terms of signifying a place and Yau Ma Tei is one of the areas that embodies Hong Kong’s heart and soul. We look forward to being part of its urban fabric and its rich and complex history.”

“The seven artists that will be presented as part of this exhibition are of exceptional talent and represent the excellence and some of the diversity of the Hong Kong art scene. It is time for Hong Kong artists to start to take to the international stage and we hope to take a leading role in realising this,” Dr. Nittve added.

M+ will be the museum for visual culture in the West Kowloon Cultural District (WKCD). Focusing on visual culture from 20th and 21st century and traversing art, design, architecture and the moving image and with a world- class collection, M+ will be developed from a Hong Kong perspective, but with a global vision and outreach. It is an ambitious project, the scale of the building, at around 60,000 square metres, will be on a par with the Museum of Modern Art in New York.

WKCDA is already programming. Its first cultural event was the West Kowloon Bamboo Theatre in which six star-studded Cantonese opera performances, a visual arts exhibition and a film marathon were staged in a purpose-built bamboo theatre at the future Xiqu Centre site of the WKCD near Canton Road during the Chinese New Year in January 2012.

The West Kowloon Cultural District
The West Kowloon Cultural District is the largest cultural project in Hong Kong to date. Its vision is to provide a vibrant cultural quarter for the city; a vital platform for the local arts scene to interact, develop and collaborate; and major facilities to host and produce world-class exhibitions, performances and arts and cultural events. The District will include 17 core arts and cultural venues and 30,000 square metres of space for arts education. It will be a low-density development, providing ample open green space and embracing two kilometres of a vibrant harbour-front promenade, 23 hectares of open space and a green avenue, and closely connected with the neighbourhood.

The project will be developed in phases. The venues to be commissioned in Phase 1 include the Xiqu Centre (main theatre and Tea House), a Freespace with an outdoor stage, phase I of M+ (a museum of 20th-21st century visual culture), a Lyric Theatre, a Centre for Contemporary Performance, Medium Theatre I, a Music Centre with a Concert and Recital Hall, a Musical Theatre, a Mega Performance Venue and an Exhibition Centre. A host of ancillary facilities including a Resident Company Centre, other creative learning facilities and a number of Arts Pavilions for visual arts exhibitions will also be constructed in this phase. Phase 2 will involve the commissioning of the Great Theatre, a small theatre as part of the Xiqu Centre, Medium Theatre II and phase II of the M+ development.

The development plan was submitted to the Town Planning Board for consideration in December 2011. Construction works are scheduled for commencement in 2013. WKCDA's first cultural event was the West Kowloon Bamboo Theatre which was staged at the future site of the Xiqu Centre near Canton Road during the Chinese New Year in 2012.

Yau Ma Tei
Yau Ma Tei has historically been characterised by its diverse and varied make-up – at once metropolitan and suburban, industrial, commercial and residential, seafaring and land-based. Originally a narrow anchorage used by fishermen, Yau Ma Tei has grown from a prosperous market town in the late 19th century into one of Hong Kong’s busiest residential and commercial districts where a unique fruit market is located. Rows of shop-houses and tenement buildings sprang up, and the area soon became Kowloon’s centre of entertainment, with cinemas, theatres, hawking stalls and street performances. Today, primarily a working class district, Yau Ma Tei’s built environment resembles a typical urban street block pattern, yet it is not uniform. While there are clustering of businesses of similar trades, it is also characterised by a dynamic coexistence of traditional and newer business clusters not found in the city’s standard commercial areas. But these traits of Yau Ma Tei are known to be under threat, partially because few of its buildings possess “monumental qualities”, when it is in fact its “ordinariness” that gives the area its value of embodying the marks and stories of Hong Kong’s grassroots population.

Kwan Sheung-chi (b. 1980) graduated in Fine Art from the Chinese University of Hong Kong in 2003. In 2002, Kwan Sheung Chi Touring Series Exhibitions, Hong Kong appeared in ten major exhibition venues in Hong Kong, and the Hong Kong Art Centre presented the exhibition A Retrospective of Kwan Sheung Chi. In 2003, Kwan set up a studio in Fotan industrial district. In addition to his studio practice, he co- founded the Hong Kong Arts Discovery Channel (HKADC) in 2009, a web-based channel that promotes critical discourse through interviews with artists, curators, critics, and audiences; he is also a co-founder of hkPARTg (Political Art Group) and Woofer Ten. In 2009, he was awarded the Starr Foundation Fellowship from the Asian Cultural Council, to take part in an international residency program in New York. www.kwansheungchi.com

Leung Mee-ping (b. 1961) graduated from L’École Nationale Supérieure des Beaux- Arts, Paris, France, and obtained a master’s degree in Fine Art from the California Institute of the Arts, USA, and PhD at The Chinese University of Hong Kong (Religious and Cultural Studies Department). Leung received the Hong Kong Contemporary Art Biennial Award in 2002. Her solo exhibitions include Made in Hong Kong (2011) in Taipei, and Reality – Leung Mee-ping Installation Art Exhibition (2012) in Macau, as well as those held at the Kaohsiung Museum of Fine Arts (2003), the Shanghai Gallery of Art (2006) and the Groninger Museum, the Netherlands (2008). Her works are in numerous private and public collections in China, France and Hong Kong. Leung is assistant professor at the Academy of Visual Arts, Baptist University of Hong Kong. www.lmp.hk

Erkka Nissinen (b. 1975) studied at the Slade School of Fine Art in London and earned a master’s degree from the Academy of Fine Arts in Helsinki, Finland, in 2001. In 2007 he was awarded a residency at the Rijksakademie in Amsterdam. His works have been exhibited at the Ellen de Bruijne Project Space in Amsterdam, Smart Projects Space in Amsterdam, Helsinki City Art Museum’s Kluuvin Gallery and 1646 in Den Haag. He won the Illy Prize at the 2011 Rotterdam Art Fair. Nissinen is also co-director of Handkerchief Production, a Hong Kong-based creative studio and fashion brand dedicated to interdisciplinary experiments in architecture, art and design. www.handkerchief.com.hk

Pak Sheung-chuen (b. 1977) lives and works in Hong Kong as a writer, photographer, painter and conceptual artist. Pak obtained his undergraduate degree in Fine Arts and Theology from the Chinese University of Hong Kong in 2002. Between 2003 and 2007, he was a regular visual-arts columnist for the Sunday supplement of Ming Pao Daily News. Pak has participated in Taipei Biennial 10 (2010), the 3rd Yokohama Triennale (2008), the 3rd Guangzhou Triennial (2008), China Power Station II (2007) and the 6th Busan Biennale (2007). His solo exhibition Page 22 is permanently installed in New York’s 58th Street Branch Library. He represented Hong Kong at the 53rd Venice Biennale in 2009. For its 2011 Almanac, ArtAsiaPacific magazine selected Pak as one of 5 Outstanding Artists and Promising Figures. His work is in many private and public collections, including Tate Modern and the Astrup Fearnley Museum of Modern Art, Oslo. www.oneeyeman.com

Tsang Kin-wah (b. 1976) graduated from the Fine Arts Department of the Chinese University of Hong Kong in 2000, and subsequently earned his master’s degree from Camberwell College of Arts, the London Institute, in 2003. Tsang has participated in numerous exhibitions, such as the Hong Kong Art Biennial (2001 & 2003), the Aichi Triennale (2010) and the Biennale de Lyon (2009). His solo exhibitions include Tsang Kin-Wah at Yvon Lambert Gallery in New York (2007) and Paris (2008), and MAM Project 015: Tsang Kin-Wah at Mori Art Museum (2011). Tsang’s works are in key collections including the Hong Kong Museum of Art, the Sovereign Art Foundation, the DSL Collection, the Deutsche Bank Collection and Mori Art Museum. www.tsangkinwah.com

Wong Wai-yin (b. 1981) works in a variety of media, ranging from painting, sculpture, collage, installation and photography. She graduated from the Chinese University of Hong Kong in 2004, and earned a master’s degree in Fine Arts from the University of Leeds in 2005. She has exhibited extensively in Hong Kong, as well as in Japan, Singapore, Guangzhou and the United States. Her works were featured at the Hong Kong Museum of Art in 2009, as part of the Louis Vuitton: A Passion for Creation exhibition. www.wwy.hk

Yu Lik-wai (b. 1966) graduated with a degree in Cinematography from the Institut National Supérieur des Arts du Spectacle (INSAS) in 1994. Yu’s directorial debut was the medium-length documentary Neon Goddesses (1996). He followed this with Love Will Tear Us Apart (1999; In Competition entry, Cannes Film Festival), All Tomorrow’s Parties (2003; Un Certain Regard entry, Cannes Film Festival) and Plastic City (2008; In Competition entry, Venice Film Festival). As a cinematographer, he has shot all of Jia Zhangke’s films to date, from Xiao Wu (1997) to I Wish I Knew (2010), and has worked with Ann Hui (Ordinary Heroes, 1998, and A Simple Life, 2011), and Lou Ye (Love and Bruises, 2011), among others.

The complete programme is on the web site.