It is the synthesis of a shared process that took place during 3 days of workshop and that involved Jean-Luc Moulene, Marc Touitou and a group of students. It is possible to define it an exhibition as the formalization of reflections developed around the 39 Strike Objects and 9 newspapers. 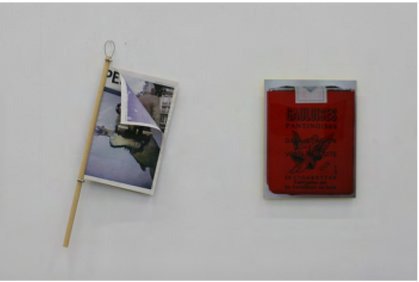 ergʼ students + moulène is a twofold title. It is the synthesis of a shared process that took place during three days of workshop and that involved Jean-Luc Moulène, Marc Touitou and a group of Erg’s students. It is possible to define the ergʼ students + moulène exhibition as the formalization of reflections developed around the 39 Strike Objects and nine newspapers realized by Jean-Luc Moulène and Marc Touitou.
The gallery’s windows covered by white chalk’s powder, a material that is often used in the commercial shops to indicate changes of window’s display or of ownership, prevent the vision of the exhibition from outside.

In the gallery seven groups of printed matters – Opus conceived and produced by the students - are superimposed in stacks on gray bricks on the floor, and made available to be picked up by the visitor. These horizontal presences contrast and balance with the sacred verticality in which the 39 Strike Objects and newspapers are displayed. Usually, in Moulène’s exhibitions, the newspapers are presented in pile on the floor, and made available to the public. In ergʼ students + moulène the newspapers standed up as flags on the walls, and can be consulted as in bistrots.

Next to the Opus on bricks, Moulène’s object Standard et la cendre contribute to highlight the concreteness of the exhibition.
39 Strikes Objects’ photographs present a collection of items produced from 1970 to 1990 by workers on strike in France. The objects are not mass production, despite the fact that they were made in industrial production lines. They have an independent life compared to goods because they do not satisfy the standards of a mass production. On the contrary, they could be interpreted as art objects for their originality and uniqueness. These objects had represented the workers' struggle and they had embedded the stories of the people and their time. They were born to propagandize the aim of strikes. In others words, these objects are containers of memory from the first moment of their creation.

The workshop has been divided in two groups of students, one responsible for the organization and installation of the exhibition and the other for the elaboration and production of the printed matter. The workshop was to give to the students the possibility to become acquainted with the process of making exhibition in a given space: both as a container and an object.
The starting point of the new work was determined by the wish of Jean-Luc Moulène and Marc Touitou to give a shape to the text The Victim’s Rights Were Flouted. FIRSTLY BECAUSE THERE WILL BE NO MORE FINALLY written by Manuel Joseph for the Biennal of Tirana in 2009, published in Milosao and titled “Nëse arrij të bëj dicka me duar të pastra”.

The Opus produced in the frame of the workshop:
A group of students worked on the obsolescence of words, listing old –fashioned words coming up with different kind of vector graphs and scratchs. Others students, starting from the weather forecast, worked on the idea of prophecy of newspapers. Another group showed the fold of “Le Monde”, focalizing on the idea of the transitory state in art, between objects and photographs or texts and images.
The exhibition’s map was also exhibited on a gray brick, as one Opus, providing for each Strike Object a descriptive story written by Viviane de Tapia.
Francesca Chiacchio