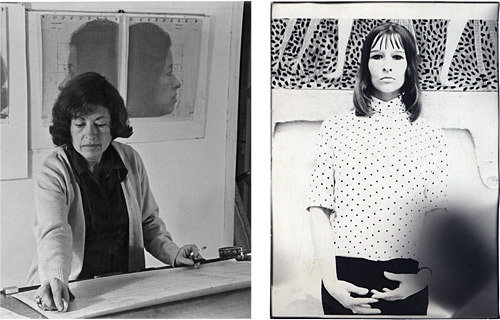 The Gallery Barbara Thumm is presenting two female artists, Teresa Burga (born 1935 in Peru) and Anna Oppermann (born 1940 in Eutin, deceased 1993), who methodically redefined artistic practice in the 1970s. Nowadays both positions are in their own way still and maybe more than ever considered as highly influential on contemporary discourses about how the dealing with subjectivity can lead to social approaches.

As Ute Vorkoeper who is an expert for Oppermanns oeuvre, writes: “The ensemble "Theory of emotions", is now for the first time publicly exhibited in the gallery Barbara Thumm. It is together with her photographic work documenting the ways in which Anna Oppermann reflected on her method, which developed gradually through the artistic process of creation, and was together with a group of self-portraits discovered only posthumously.
These photographic self-portraits in different poses, disguises and shifting arrangements were created from the mid-1960s to the mid-1970s. The artist herself kept them together as a group, but they were never made public. However, the artist's shifts in role and perspective – sometimes drastic, sometime subtle – are so remarkable and touching that we have taken the decision to publish them posthumously”.
Since spring 2010 the gallery Barbara Thumm is representing the estate of Anna Oppermann. They are pleased to announce that Oppermann will be part of the 30th Sao Paulo Biennial this autumn. The museum Abteiberg is currently displaying the new acquisition "Künstler Sein".

To this day, the work of Teresa Burga (Iquitos, 1935) holds an exceptional position within Latin American discourse on art. From the 1960s onwards, Burga developed her pop and conceptual art in a country that was ruled by a nationalist military regime between 1968 and 1980, and thus she had to overcome significant obstacles in order to exhibit and become known. Accordingly, her artistic endeavours took a path parallel to populist demands of the time for a "Peruvian national" art. On this parallel course Burga developed her method of constructing subjectivity by using gestures and repetition in an extensive series of drawings, sketches and installations, completed during the 1970s.
Her most significant exhibition at this time was "Autorretrato. Estructura. Informe. 1972" (Self-portrait. Structure. Report. 1972). In this wide-ranging project, the artist used her own body to create a medical map of herself – using drawings of her profile and photographs of her face, an ECG and a light that displayed her cardiac function, and a biochemical haemanalysis. "Autorretrato" wasn't and isn't just an ironic reflection on the traditional, pictorial concept of the "self-portrait", but also engages critically with processes that seek to standardise the subject.
The juxtaposition of the two artists Burga and Oppermann is indicative for the programmatic interest of the gallery Barbara Thumm, hence to re-discover and re-evaluate groundbreaking and conceptual artistic practices from the 1960s to the 1980s.