The artistic medium - as drawing, sculpture and video - there are certain characteristics these artworks have in common: natural Alpine wit and grotesqueness on the one hand, profundity and melancholy on the other. 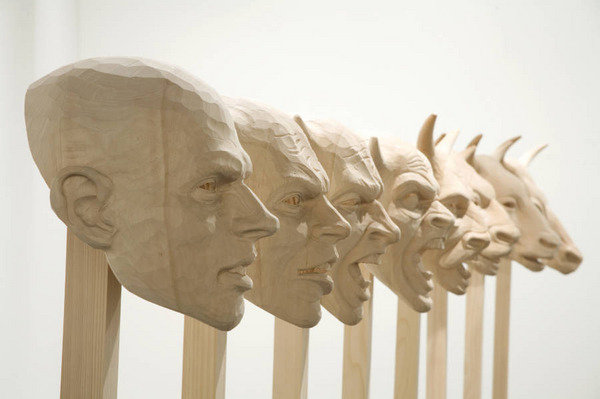 The name "Alpenrepublik" generally applies to Austria, occasionally also to a fictitious Alpine state, a separatist construct. As the title to an exhibition at Kunstraum Innsbruck and Artdepot, though, it denotes an art terrain which is home to idiosyncrasy, waywardness, otherness, and all things archaic and anarchic. These are fictions that serve to describe a state that, in contrast to general gravity, is characterised by the suspended state of being exposed. Whether the artists hail from the Alpine territory, were born here or live here (in Bavaria, Allgäu, Salzburg, Tyrol and South Tyrol, Switzerland, Trentino and Belluno), or whether they deal with related subjects, such as the boot and foot skeleton of South Tyrolean mountaineer Günter Messner, found many years after he went missing on K2, as did John Bock, it is not the fascinating landscape, it is the state of mind of its inhabitants that the exhibition is interested in. Visions of a mountain world whose inhabitants still have close ties to nature, religion and fauna, even if these ties at times take on grotesque traits. Fatefulness in the widest sense, from Ferdinand Raimund's dialectic of "Alpenkönig und Menschenfeind" (Martin Gostner) to the entrappedness of the individual in alpine nature (Luca Rento), and the demons still haunting the Alpine region from the Nazi era (André Butzer, Alexander Wolf), ultimately even the Alpine humour, as in the Lola installation by Stefano Cagol (using cowskins), what the project is about are old and new myths, also self-invented myths, belonging to this part of the world like King Ludwig II of Bavaria (Olivia Berckemeyer, Felix Burger), Andreas Hofer in a grotesque series of drawings by Thomas Palme, or the poetical references of Sandra Boeschenstein and Alessandro dal Pont. Meanwhile, it is the scurrilous elements in the mountain people's demeanour, and in the way animals play a part in their lives, as well as cadavers that pop up in the works of Markus Schinwald, Hans Weigand, and Thomas Helbig.
Whatever the artistic medium − portrait, drawing, sculpture, photograph, video, or spatial installation − there are certain characteristics these artworks have in common: natural Alpine wit and grotesqueness on the one hand, profundity and melancholy on the other. And there could hardly be a better place for such an exhibition than Innsbruck, the capital of the Alpenrepublik, as it were.

To go with the exhibition, is available a catalogue book, containing texts by Veit Loers, Adalbert Stifter, Dino Buzzati, N.C. Kaser, Sepp Schluiferer, that will be available at both venues for the special price of 14 EUR.