'A Thousand Kisses Deep' by Kun presents 28 shimmering paintings, technical studies of drifting light evoking a sinister, sensual beauty and the dual themes of carnality and spirituality. 'Water Work' is the first solo exhibition of artist Yun-Fei Ji in Beijing. 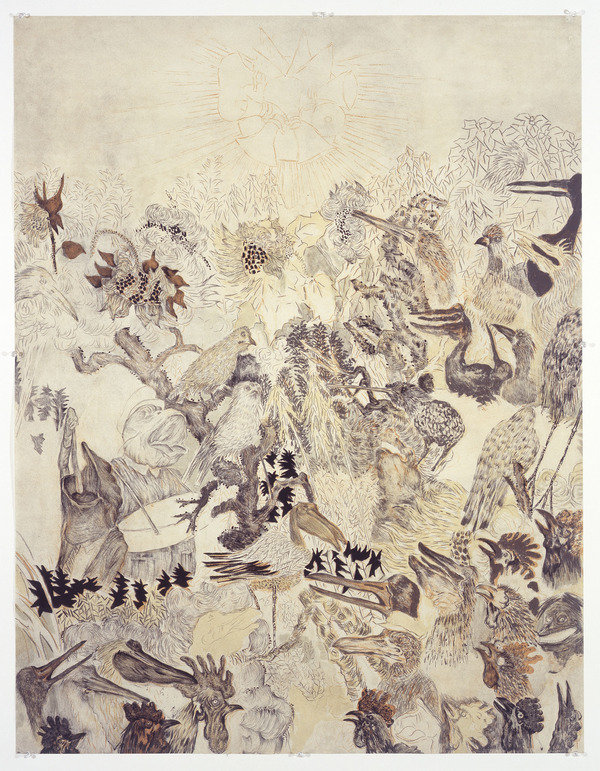 A Thousand Kisses Deep presents new work by one of China’s most prominent young female artists, Song Kun. Hung salon-style across the twin walls of UCCA’s Nave, the exhibition features a new cycle of 28 shimmering paintings, technical studies of drifting light evoking a sinister, sensual beauty and the dual themes of carnality and spirituality. Paired with an immersive video installation, this presentation showcases the latest practice of one of China’s most interesting young painters.

This most recent work demonstrates an exploration of abstract qualities, divided roughly between images of bodies and static organic forms, and dominated by shifts between light and dark. The works evoke emotional distance, while employing an increasingly luscious color palette. A Thousand Kisses Deep explores the quiet properties of natural materials, then ventures into the realm of carnality. Deeply personal moments become allegories for societal change, fear, desire and disillusion. The artist’s work is characterised by a kind of wistful desire, with figures portrayed as hovering in a dream world both familiar and fantastic.

This is the first solo exhibition of artist Yun-Fei Ji in Beijing, the city in which he was born. New commissions and key works from the past decade are included as well as several scroll paintings over ten meters long, previously unseen together. In this exhibition Yun-Fei Ji examines historical developments in contemporary America and China focusing on the effects of grand infrastructural projects and water- related natural disasters on ordinary people.

Yun-Fei Ji made his artistic name in the 1990s as a painter working in Brooklyn, U.S. after being born and raised in Beijing, and training in oil painting at the Central Academy of Fine Arts. His practice is rooted in observation and the passage of time, using classical materials such as Chinese ink with watercolor, pencil, woodblock, and etching on paper. His painterly lens switches freely between his two homelands, with some works addressing American events such as Hurricane Katrina and others looking at projects and events in China such as the Three Gorges Dam and the North-South Aqueduct. Combining personal research with fictionalised elements, Yun-Fei Ji ‘s work is a socio-environmental document of change and progress, using Chinese symbolism to make universal statements. He deals with loss and human displacement, often adding a mythological dimension to recent happenings.

In 1940, members of The Philadelphia Orchestra played a special benefit concert to aid Chinese hospitals during a time of turmoil. Over thirty years later in 1973, under the direction of Eugene Ormandy, they would become the first American orchestra to perform in China, returning numerous times, notably in 2008 when they helped raise money for victims of the Sichuan Earthquake. Today, at UCCA, they perform as a quartet in response to Yun-Fei Ji’s solo exhibition, “Water Work”, which deftly handles issues of disaster, displacement and social memory through the quiet voice of Chinese ink and unfolding scrolls. This event is part of The Philadelphia Orchestra Residency Week and Tour of China in 2012, in conjunction with the National Centre for the Performing Arts (NCPA) in Beijing. The weeklong residency in Beijing marks the first time any U.S. orchestra has co-created a long-term residency in China. This is also the first time a musical performance directly inspired by an exhibition will take place at UCCA.

SONG KUN BIOGRAPHY
Song Kun (b. 1977, Baotou, Inner Mongolia) completed her MFA in the oil painting department at the Central Academy of Fine Arts (CAFA) in 2006. She was a founding member of the artist group N12 during her studies, and she gained recognition as one of China’s most prominent young female artists at the Second Triennial of Chinese Art (Nanjing Art Museum, 2005). Solo exhibitions include “Seeking the Recluse but not Meeting” at Walter Maciel Gallery (Los Angeles, 2009); “Xi Jia – River Lethe” at Boers-Li Gallery (Beijing, 2008); “Song Kun, Solo Project” at Hammer Museum (Los Angeles, 2007); and “It’s My Life” at Boers-Li Gallery (Beijing, 2006). Selected group exhibitions include a special presentation at The Armory Show (New York, 2010); "Body - Boundary" at Chambers Fine Art (New York, 2006); and The Second Triennial of Chinese Art (Nanjing Art Museum, 2005). In 2008 she was a resident artist at the Leipzig International Art Program. Song Kun lives and works in Beijing.

YUN-FEI JI BIOGRAPHY
Yun-Fei Ji (b. Beijing, 1963) received his BFA from the Central Academy of Fine Arts (CAFA) in 1982, followed by an MFA from the University of Arkansas at Fayetteville in 1989. He paints on handmade rice paper with translucent ink or paint based on natural pigments, using ancient techniques including calligraphy. His subjects evoke traditional Chinese landscape painting, as figures and scenes recall tales and epics from Chinese folklore and history. However, his works tell much more contemporary stories. Rather than displaying vistas of villages nestled into traditional mountain landscapes, Ji’s works are about moving out, as his subjects include the people who were displaced during the construction of the Three Gorges Dam, as well as those who lost their homes during Hurricane Katrina. While his work echoes the oeuvre of the ancient Dynasty Masters, whose paintings combined compositional and technical brilliance with expression of sorrow and melancholy, Yun-Fei Ji’s socially focused subjects (the result of on-site observation, documentary-style research, and an interest in satire), are more global, existential portrayals of human tragicomedy.

Yun-fei Ji developed his artistic practice in Brooklyn, New York, where he began exhibiting in 1990, but has been based in Beijing for the past three years. Group exhibitions include participation in the 2002 Whitney Biennale and the 11 Biennale de Lyon (2011), as well as shows at The Museum of Modern Art, New York and the British Museum, London. In 2012, he will participate in the 18 Biennale of Sydney. Selected solo exhibitions include “Boxers” at the SAFN Museum, Iceland (2004); “The Empty City,” which traveled to the Contemporary Art Museum St. Louis and the Rose Museum, Brandeis University, Waltham, MA (2004); “Great News Comes From the Collective Farm” at ZenoX, Belgium (2005); “Water That Floats the Boat Can Also Sink It” at the James Cohan Gallery, New York (2006); and the Frieze Art Fair at Zeno X Gallery, London (2010). He received The Rome Prize in 2006 from the American Academy in Rome, Italy. This will be his second solo exhibition in China and first in Beijing.

UCCA
The Ullens Center for Contemporary Art is a not-for-profit art center in Beijing, located at the heart of the 798 Art District. As a platform for contemporary art linking China and the world, UCCA offers an average 15 exhibitions a year and over 500 public programmes including art talks, film screenings, performances, workshops and public festivals. The international center maintains a special focus on recent developments and historical movements in Chinese contemporary culture, whilst also showcasing the latest in art and design and fostering international exchange.

In 2012, UCCA are:
Producing major exhibitions of established and emerging Chinese artists, under the curatorial vision of the new Director, Philip Tinari. Artists include Gu Dexin, Yung Ho Chang, Yun-Fei Ji, Song Kun, Wang Mai, Jennifer Wen Ma, and Kan Xuan.
Showcasing major international artists. The center launched this year’s programme with an exhibition of limited edition works by artists produced by the art journal Parkett. The show, titled “Inside a Book a House of Gold,” included 212 works by 192 leading international artists including John Baldessari, Urs Fischer, Andreas Gursky, Christian Marclay, Richard Prince, Gerhardt Richter, Ed Ruscha and Cindy Sherman. The center will stage Indian Highway this summer, marking the first major touring exhibition to be mounted at UCCA as well as the largest exhibition of Indian art in China to date. Fall shows round up an international programme with artists including Japanese sculptor Teppei Kaneuji and the first ever exhibition of Marcel Duchamp in China.
Investing in capital projects with the philanthropic support of Baron Ullens. This includes renovating and landscaping the center’s main entrance giving it a thoroughly enhanced street presence, improving exhibition spaces and planning areas for a curated programme of outdoor sculpture.
Launching a world-class publishing operation, UCCA Books.