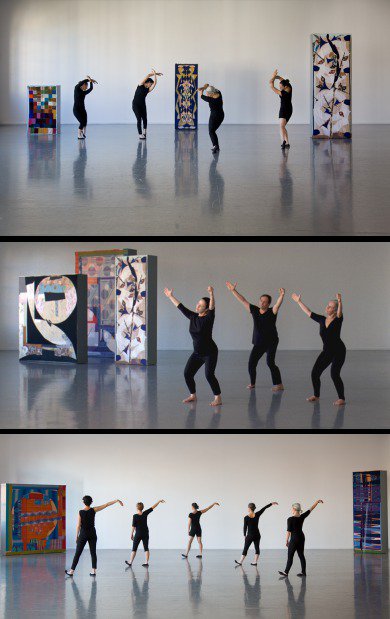 (Los Angeles, June 1, 2012)— The Los Angeles County Museum of Art (LACMA) presents Sharon Lockhart | Noa Eshkol, the North American premiere of Sharon Lockhart’s latest body of work. In this exhibition, co-organized by LACMA and the Israel Museum, Jerusalem, Lockhart considers the legacy of Noa Eshkol, the noted Israeli dance composer, theorist, and textile artist who created an innovative notation system capable of describing virtually every perceptible movement of the body. Conceived as a two-person exhibition, Sharon Lockhart | Noa Eshkol presents Eshkol’s largely unknown achievements through a new five-channel film installation, a series of photographs, and a selection of Eshkol’s carpets, scores, and archival drawings. This exhibition opened at the Israel Museum in December 2011 and will travel after its presentation at LACMA to the Jewish Museum in New York.

"We feel privileged to have this opportunity to present a unique project bringing together the visions of two notable artists, each working in different aspects of contemporary creativity," says Stephanie Barron, senior curator of modern art and exhibition co-curator. Britt Salvesen, exhibition co-curator and curator of photography, adds, "Through film and photography, Lockhart evokes and interprets Eshkol's brilliant practice, ultimately celebrating the collaborative spirit of cross-cultural artistic relationships."

About the Artists
Through her work with photography and film, Los Angeles–based artist Sharon Lockhart (b. 1964) captures intimate quotidian moments from a wide range of communities. Lockhart’s in-depth exploration of her subjects allows her to discern patterns and rhythms that she distills through her art. It was during a research trip to Israel in 2008 that she first encountered the work of Israeli artist Noa Eshkol (1924-2007). In the 1950s, together with architect Avraham Wachman, Eshkol developed a wholly original movement notation system known as Eshkol-Wachman Movement Notation (EWMN), which uses symbols and numbers to express the spatial relationships between the parts of the body, both in stasis and in motion. Eshkol devoted her life to perfecting the system, which has been applied in dance as well as in many scientific fields. Because she preferred to work in isolation, Eshkol’s work in modern dance is little known outside of Israel. In an effort to share this pivotal work with a larger audience, Lockhart captured Eshkol’s aging students and a new generation of dancers performing the artist’s original choreography.

Exhibition Overview
Presented on the 2nd floor of BCAM, Sharon Lockhart | Noa Eshkol explores aspects of Eshkol’s extraordinary practice through several mediums. In Lockhart’s five-channel film installation Five Dances and Nine Wall Carpets by Noa Eshkol (2011), five of Eshkol’s dances are performed by seven dancers. During her research trips to Israel, Lockhart closely followed the work of these dancers, who continue to practice and keep Eshkol’s work alive at her former home-studio in Holon, now the Noa Eshkol Foundation for Movement Notation.

In the Holon archives, Lockhart discovered several spherical models made of wire and mesh that were originally used as aids to teaching Eshkol’s notation method. A series of still photographs by Lockhart depicts these enigmatic but utilitarian objects. Selected documents, notes, and drawings from the archive further illuminate Eshkol’s creative process and career.

In the exhibition’s final gallery, Lockhart has installed three vibrant examples of Eshkol’s work as a textile artist. Beginning in 1973 with the onset of the Yom Kippur War, she composed what she called “wall carpets,” using found, donated, uncut scraps of fabric. The dancers participated by sorting the scraps and sewing the final arrangements. Eventually Eshkol composed some 1,800 wall carpets, which represent a substantial aspect of her oeuvre.

The exhibition was designed by Los Angeles–based architects Frank Escher and Ravi GuneWardena. Dane Davis and composer Becky Allen worked with Lockhart to create the film installation’s soundtrack. Lockhart worked closely with members of the Noa Eshkol Foundation for Movement Notation in Holon, Israel, an organization dedicated to preserving the legacy of the Israeli movement and Noa Eshkol.

Exhibition Catalogue
The exhibition is accompanied by a fully illustrated catalogue, co- published by LACMA, the Israel Museum, and DelMonico Books/Prestel. Contents include essays by Talia Amar, Stephanie Barron and Britt Salvesen, Eva Diaz, and Michal Shoshani, and interviews with Eshkol’s dancers as well as between Lockhart and Sabine Eckmann.

Credit
This exhibition was organized by the Los Angeles County Museum of Art and The Israel Museum, Jerusalem. Initial support for Sharon Lockhart | Noa Eshkol came from The Jewish Federation of Greater Los Angeles's Tel Aviv - Los Angeles Partnership.
Sponsored by
This exhibition is made possible through major gifts from Daniel Greenberg, Susan Steinhauser and The Greenberg Foundation; Audrey M. Irmas; Alice and Nahum Lainer; Drs. Rebecka and Arie Belldegrun; The Philip and Muriel Berman Foundation; and The Photographic Arts Council. Additional support was provided by Helgard Field-Lion and Irwin Field; Laura and Jim Maslon; and the Consulate General of Israel, Los Angeles.

About LACMA
Since its inception in 1965, LACMA has been devoted to collecting works of art that span both history and geography and represent Los Angeles's uniquely diverse population. Today, the museum features particularly strong collections of Asian, Latin American, European, and American art, as well as a contemporary museum on its campus. With this expanded space for contemporary art, innovative collaborations with artists, and an ongoing Transformation project, LACMA is creating a truly modern lens through which to view its rich encyclopedic collection.