This group show utilises the event of this year's 275th anniversary of the founding of the Bohemian village to talk about the potential of cultural and religious diversity for the future of the immigration society. 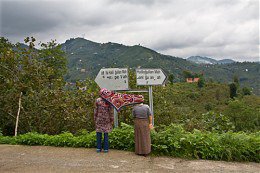 The exhibition utilises the event of this year's 275th anniversary of the founding of the Bohemian village, one of the settlements of religious refugees in Berlin, to talk about the potential of cultural and religious diversity for the future of the immigration society. One of the most important preconditions for the productivity of cultural pluralism is the adherence to the human rights of freedom of religion and conscience. The artists' installations, photos and videos explore in very different ways issues of belief, diversity and tolerance/intolerance.

The exhibition is named after the title of a novel by Milan Kundera which he wrote in 1969/70, after the Prague Spring and the associated cultural freedom were ended by the invasion of Soviet troops. The hope for a better life elsewhere is an issue of global migration, but also the title stands for the desire of individuals for personal freedom and fulfillment. The exhibition therefore intersect several thematic lines:

First, it's about the relationship between issues of religion and conscience and questions of cultural identity. Works by Bodil Furu and Maya Schweizer address the struggle of people with the question of how to organize their lives "right" and how to participate in the multi-cultural society. Chan Sook Choi's installation "For Gott EN" talks about the interplay of faith, doubt and memory. Artists such as Oreet Ashery and Nilbar Güres reflect with their interventions in a humorous, taboo-breaking way the intersections between gender, ethnicity and religious affiliation.

On the other hand, the exhibition makes clear that diversity is a fragile entity that requires a shelter and is in permanent danger of being neutralized or destroyed. The right to cultural difference is investigated by Kaspars Goba's videos on marginalized groups in Latvia. Nadin Reschke talks about diversity and tolerance in her participatory travel project "So far so good". The artist was on the road in 14 countries along the Silk Road with a tent, which she embroidered at the different places together with local women while discussing cultural differences, personal beliefs and the everyday. In contrast, this year's documenta participant Mariana Castillo Deball explores, how intolerance and ignorance put down cultural richness. In her film "The Where I Am Is Vanishing" she tells the centuries-long painful odyssey of the Codex Borgia, an Aztec ritual manuscript, which survived the book-burning of the Spanish Inquisition during the colonization of Mexico.

In another section of the exhibition artists suggest alternative realities and humorously investigate power and universality pretensions. J&K invent an altar-like place of worship, the visualization of their subjective exploration of various spiritual forms in their performances and interventions. Almost shamelessly combining rituals and symbols of various religions and cultures, they question in a playful way the truth demands of belief systems.

With a similar intention the interactive sculpture "Send It Back To Where It Came From" by Mathilde ter Heijne invites the visitors to light a magical reverse candle, and to add it to the existing candles which are labeled with words such as hierarchy, property, colonialism, patriarchy, abuse, poverty, control. When burning the candle, the outer black layer melts and is covered by the inner red wax, a picture for the liberation from external forces, the breaking up of hardened structures and the rethinking of ingrained perceptions.

With this exhibition, the Bereich Kultur of the Bezirksamt Neukölln is involved in the extensive event program "Glaubensfreiheit" (freedom of belief), which is being developed and organized from inside the Bohemian village. At the same time, the exhibition refers to the theme of the festival 48 Stunden Neukölln "Last Stop: Paradise".

The exhibition will be opened by Dr. Franziska Giffey, district councilor for education, school, culture and sports.