Forbidden Castle. The show challenges notions of reality, politics, and the self and will include installation sculptures, video-films, and photography. The works pre-date the founding of Zhen's MadeIn Company in 2009, after which he ceased to produce work under his own name. 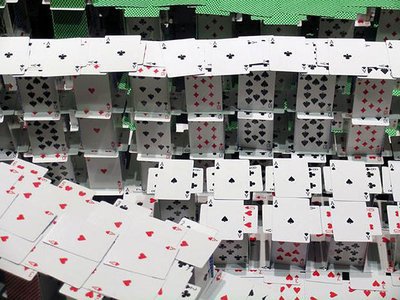 Forbidden Castle presents a selection of work by Xu Zhen, one of the most radical and humorous artists working in China today. The exhibition challenges notions of reality, politics, and the self and will include installation sculptures, video-films, and photography. The works pre-date the founding of Xu Zhen's MadeIn Company in 2009, after which he ceased to produce work under his own name.

MuMo will present the last work Xu Zhen produced under his own name, Untitled, a house of cards made of over 160,000 custom playing cards in the form of the Potala Palace in Lhasa, the castle-like former residence of the Tibetan god-king, the Dalai Lama.

The Museum Montanelli stands below Prague Castle, the largest castle in the world and for centuries the seat of the powerful and inspiration for Kafka's novel The Castle. Prague Castle's function and location remind us of the Potala Palace and this analogy was the trigger to bring to Prague the unique artwork Untitled.

Other important works to be shown include the video Rainbow, first exhibited at the Venice Biennale. Xu Zhen started out making videos that focused on the body and public space in a manner reminiscent of early Bruce Nauman or Vito Acconci: the video Rainbow (1998) shows a man's exposed back becoming increasingly red, the result of slaps heard on the sound track but never seen.

In August 2005 Xu Zhen and his team climbed the 8,848-meter high Mount Everest, which sits partly within China's borders. They succeeded in slicing off the peak of the mountain—an amount equal to Xu Zhen's own height—and taking it down. His video 8.848-1.86 (2005) documents the expedition, which included displaying the removed 1.86 metres of the mountain's peak in a large refrigerated vitrine cabinet (now in the collection of Tate Modern). The video, among other allusions, is a subtle and humorous commentary on China's nationalism but also on the 'measure' and perception of the individual within the mass. At the time, the work caused huge outcry in China because many people thought it had really happened, whereas the entire performance was actually a calculated confection.

It presents the famous footprint of the first step of Neil Armstrong on the moon reproduced on a single grain of sand. With this "giant step for mankind" Xu Zhen created the smallest artwork in the world, challenging notions of reality as received information.