International Contemporary Photography Fair. For the fourth edition, over 40 specialized galleries from all over the world bring to Madrid the best works in the contemporary scene. 'Our Work is Never Over' is a collective exhibition that takes place within the context of Madridfoto 4. 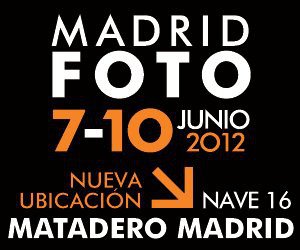 MADRIDFOTO 2012: galleries, prizes and events in a new edition of these international contemporary photography fair.

The fourth edition of MADRIDFOTO will take place from the 7th to the 10th of June 2012 in a new location at Hall nr. 16 in Matadero Madrid. MADRIDFOTO contributes to complete the wide offer of exhibitions and engaging activities programmed around photography in Madrid during those days. Over 40 specialized galleries from all over the world will bring to Madrid the best works in the contemporary scene.

Besides designing a very stimulating collectors' program, Art Fairs, organizing company of MADRIDFOTO, has secured acquisition commitments by institutions and companies in Madrid. MADRIDFOTO will continue promoting new talent through three different photography prizes: the 3rd Edition of the Madrid Regional Government Award (CAM- MADRIDFOTO Prize) with '10,000, the 1st Edition of the Foto ArtFairs Prize for Young Photographers with an international renowned jury of photographers and a '3000 endowment, aiming at starting a private contemporary photography collection; and also the 1st Edition of the Casa M'nico Prize with a '5000 prize by which this prestigious catering company will support contemporary photography related to gastronomy in its widest sense.

MADRIDFOTO organizes conferences and gatherings with photography experts and professionals. Amongst them, independent Cuban curator Andr's Isaac Santana is putting together a series of round tables to discuss the issues around collecting and commercialising photography in contemporary paradigms. In these events specialists such as Alejandro Castellote (curator), Janet Batet (art critic and curator), Sergio Mah (former PHotoEspaa general curator), Estrella de Diego (art critic) or Juan Antonio Molina (art critic and curator) will actively participate.

In parallel, book signing events - including an exclusive book presentation by the German artist Andrea Stappert - and encounters with photographers will take place during the fair with a conference by Baron Wolman (photographer and original picture editor for Rolling Stone magazine) as culminating highlight.

MADRIDFOTO is directed by Giulietta Speranza and organized by Art Fairs SL, an initiative by a group of private collectors and businessmen, headed by Enrique de Polanco. MADRIDFOTO 2012 is supported by the Spanish ministry of Culture, Madrid's Community and Madrid's City Council, as well as by partner companies interested in photography who rely on the success of this unique fair.

Matadero Madrid’s Nave 16 presents Our Work is Never Over, a collective exhibition curated by Yael Messer that takes place within the context of PHotoEspaña 2012: From here. Context and internationalization. Yael Messer (b. 1982 in Israel, lives and works in Amsterdam) held a curatorial research fellowship at Matadero Madrid in November 2011, a period during which she shaped the concept of this show.

In 1978, artist Mladen Stilinović documented himself through a series of photos in which he is lying in bed, doing nothing. Stilinović entitled the piece Artist at Work, to question the seeming separation between life, art, and labor. As an action and an anti-action at the same time, the work initially aimed to challenge the symbolic power of labor under the communist regime. The advent of the precarious post-Fordist society in the last 20 years with its heavy reliance on flexible, creative, and immaterial labor transforms the issues raised by Stilinović into ones that are exceptionally urgent today.

This urgency is the point of departure for the exhibition Our Work is Never Over, which features works from artists who are constantly exploring where art, labor, and everyday existence overlap in contemporary society. This group of artists reflects on the immateriality of the artistic process, the role of labor in designating social life, and the complexity of representing invisible work.

The artists participating in the exhibition choose to reflect on the totality of their bio-political existence from within and through life itself: some document their everyday life and use this documentation as an artistic work, others frame their artistic acts as identical to any other form of labor, and a few make the gray area between artistic process and immaterial labor part of their own life.

MARINELLA SENATORE
ROSES. PHotoEspaña at Matadero
From 08 of June to 29 of July

ROSAS is a trilogy of operas – rooted in Senatore's engagement and interest for collaboration and music – specifically created for the screen, made with citizens from Berlin, Derby (UK) and Madrid. In all of her participatory-based projects, Senatore aims to bring together different communities, participants and associations, in order to foster the construction of an archive of shared narratives that create a sense of community.

For PERFECT LIVES, the first part of the trilogy, Senatore has involved hundreds of people, was collaborating with radio stations and local newspapers and invited schools, the Orchestra of the BVG, actors and dancers (professionals and not), groups and associations located in Kreuzberg/Neukölln to take part in the project.

The participants (247 in total) were involved in writing the Libretto, but also in making the final film and directing it, using cameras and lights. They shared time and skills according to their background and the level of involvement they would offer. The project encompassed a whole variety of relations, something that involves negotiations, between the instigator or mediator, the participants, the geopolitical context, and the way feelings and affective dimensions are negotiated in the public sphere.

The outcome is almost not an endpoint but one part of a much more bigger picture, a social and political dynamic that has been adopted by the community for a relevant time. SENATORE recounts momentary scenes, meetings between human beings: sometimes manipulated and rewritten, spontaneous or incited, these memories have generated social systems through aggregation and the concept of group or membership.
In activating processes, the artist (the instigator) intermingles and cuts across politics, gender relations, class divides with semi-forgotten stories, appearances of documents and fictional narratives in order to create, slowly, a sort of communal archive of ‘intensities’.

The videoart competition invites participants to create works based on the theme of The Absent Image chosen by the Indian collective Raqs Media which, given the proliferation of images all around us, urges creators to think about the infinite elements still to be recorded. Raqs Media will select the pieces to be exhibited, and will judge the winning entry, whose creator will be awarded a one-month residency –between August and December 2012 – to work with the Sarai programme (www.sarai.net) at the Centre for the Study of Developing Societies, (CSDS), a New Delhi research institute. The exhibition, also to be screened on Internet, will comprise four pieces by guest artists Suchismita Ukil & Ishaan Sadhanand (New Delhi), Zheng Bo (Hong Kong), Basel Abbas & Ruanne Abou-Rahme (Ramallah) and Yota Ioannidou (Athens).

Raqs Media Collective was founded in 1992 by Jebesh Bagchi (India, 1966), Monica Narula (India, 1969) and Shuddhabrata Sengupta (India, 1968). Raqs is a Persian, Arabic and Urdu word denoting kinetic contemplation of the world. The collective is a thought laboratory which takes aesthetics as the starting-point for social and political reflection.