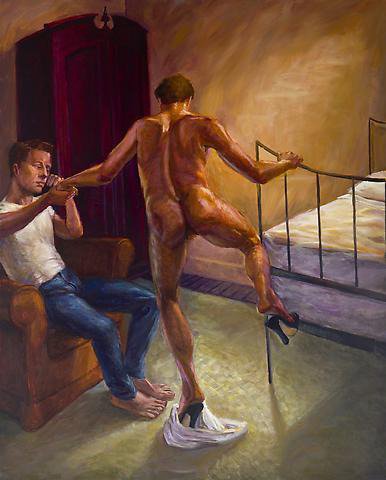 Paul Cadmus’ works on paper celebrate desire of an idealized male form. His WPA-era prints, including YMCA Locker Room (1934), Youth With Kite (1941) and Two Boys on a Beach No. 1 (1938) are radical for their time, with their homoerotic undertones. Later studies of male models and dancers, notable for their highly stylized marking and gesture, underscore a romantic view of languid, posing young men. Innocence, freedom, beauty and distance are hallmarks of Cadmus’ representation of the male nude and sexuality.

Made in 1978, Andy Warhol’s Sex Parts, a series of screen prints isolating Gay sexual acts, presents a more graphic approach to the male form and gay life in the late 1970s. Based on Polaroid photographs, Warhol’s tight cropping and added gesture further mediate a distance between the artist/observer and subject—sexual act and participant. Through Warhol’s image Identity is stripped; sex itself becomes anonymous and flattened.

The selection of paintings by Hugh Steers gives a vantage of sexuality and relationships. Painted early in the AIDS crisis, Steers’ images are at once allegorical and autobiographical: couples in embrace, remorse, and modes of care-taking. With the backdrop of hospital rooms and domestic spaces, the mis-en-scenes are emotional and intimate, suggesting beauty found in loss and mortality.

Alexander Gray Associates is a contemporary art gallery based in New York. The gallery has established a profile for high-quality exhibitions focused on mid-career artists who emerged in the 1960s, 1970s, 1980s, and 1990s. Influential in political, social and cultural spheres, these artists are notable for creating work that crosses geographic borders, generational contexts and artistic disciplines.

Please note: there is not an opening reception for this exhibition.