As the typographical equivalent of a wave form, its strikingly cryptic title: --{}{}{} {}--{}{}{}{}--{} translates sound into a visual representation. The artist uses the shadow gaps that are typical for exhibition spaces as a starting point for creating a new light and sound composition. 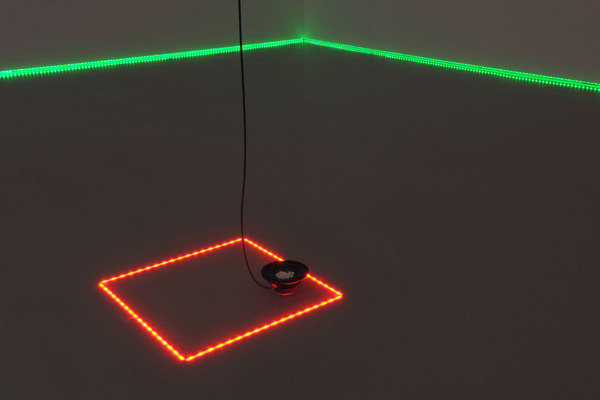 The first solo exhibition in Germany by the British artist Haroon Mirza has a strikingly cryptic title: ‘--{}{}{} {}--{}{}{}{}--{}’. As the typographical equivalent of a wave form, it is the translation of sound and light into a sign-like representation. It is also a reference to Acid Reign, a new work created by Mirza especially for the project space of the Ernst Schering Foundation, in which he explores this site on several levels.

Haroon Mirza’s artworks revolve around the complex relationship between visuality and acoustics, unfolding in continuous loops as audio-visual, spatial compositions. In his acoustic assemblages, Mirza uses found, culturally coded objects which he separates from their original function, turning them into triggers for sounds that form precise, self-generating compositions. These soundscapes are experienced in a way that is directly connected to a visual encounter. For Mirza it is decisive ‘to understand visual and acoustic space as one sensorial mode of perception’ (Mirza, 2010).

In his exhibition ‘--{}{}{} {}--{}{}{}{}--{}’, the project space on Unter den Linden is transformed into a found, occupied object in terms of architectural structure and institutional context.

On one level, Mirza alludes to the specific aspects of the project space, which was constructed to fit the requirements of contemporary art exhibitions. As such, it adheres to the paradigms of a typical exhibition space of the twentieth and twenty-first centuries, in other words a so-called ‘white cube’. In the course of exhibition history, the white cube has generated its own architectural characteristics intended to be as inconspicuous as possible. Among these are shadow gaps – the gaps between the floor and the wall where cables can be laid without being seen. These gaps, which are usually visually unobtrusive, are occupied by Mirza in a subtle intervention: Our attention is drawn to this architectural detail through LED strip lights, which also trigger acoustic signals forming the basic structure of a sound composition.

On another level, a second soundtrack is generated by a monitor showing a woman in close-up, reading a text in the rhythmic light of a strobe. The text is the English Wikipedia entry from 26 April 2012 about the history of the Bayer company. Mirza thus refers to the most used public source of information whose own definitiveness is constantly questioned through potential editing by Internet users. Mirza uses the article as found material, dislocating its context and turning it into a subtext of the composition on the level of sound.

In its ambiguity, Acid Reign as the title of the installation triggers associations to musical styles within techno and house as well as to chemical substances and states of intoxication. Through this installation, the project space of the Ernst Schering Foundation is not only translated into a sound composition, it is also occupied by it. By the same token, ‘--{}{}{} {}--{}{}{}{}--{}’ not only refers to sound and light; it is also a typographical representation of ‘occupied scheringstiftung’.

Haroon Mirza, born 1977, lives and works in Sheffield and London. He was awarded the Northern Art Prize in 2010. In 2011 he received the Silver Lion for a promising young artist at the Venice Biennale. Haroon Mirza, Acid Reign, 2012