When it stops dripping from the ceiling

This exhibition attempts to think about the impact of edification on the way we live, practice politics, make art, and communicate. It features a range of diverse works by seven artists; which indirectly address the struggle, and ongoing debate between individual autonomy and social collectivity. 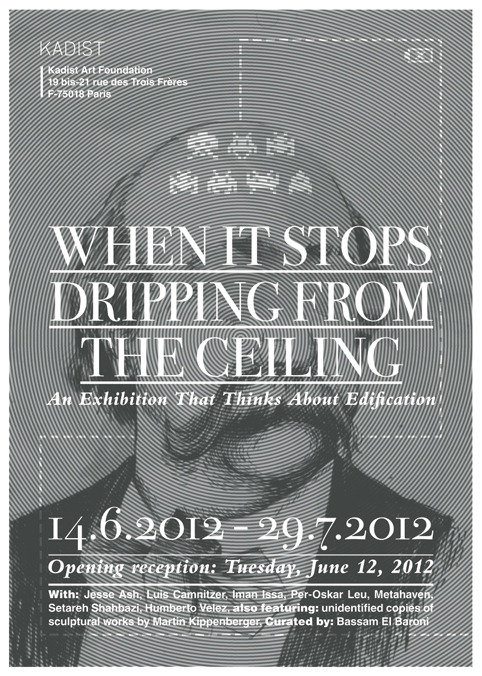 In present times, some are calling for the invention of new terminologies that can more accurately discern phenomena affecting our lives, culturally, socially, and politically. Sometimes, the terms that we need are not to be reinvented but merely excavated and given new meaning. Edification is perhaps one such term. A quick dictionary search will tell you that edification means 'to instruct especially so as to encourage intellectual, moral, or spiritual improvement', that it denotes an 'uplifting enlightenment that results in understanding and the spread of knowledge'.

During the past three centuries, edification has been about inidual thinkers creating equations for resolving the gap between the inidual's autonomy and the society the inidual functions within. These equations are eventually diluted, simplified, or reconfigured to become the intellectual basis of states, the cultural codes of sociopolitical systems, or the administrative mechanisms of oppressive regimes. This exhibition attempts to think about the impact of edification on the way we live, practice politics, make art, and communicate. It features a range of erse works by seven artists; which indirectly address the struggle, and ongoing debate between inidual autonomy and social collectivity.

But, how can we recognize edification? Think about how, although you have never read Gustave Flaubert's novels, you have recently come to realize that you have been edified by them, or about how you know the essence of almost every article featured in the Universal Declaration of Human Rights despite the fact that you have never bothered to read it. Think about how in moments of great despair or pain you suddenly find yourself reverting to religious terminology, even though you are more of an agnostic than a self-proclaimed believer. Or about, how in the middle of an intimate interaction of love, you can only express your emotions in words that seem to be generic lines abundant in popular romantic movie scripts. Think about how many artists, curators, and art writers today either embody or struggle to escape the edification of such long-dead thinkers as Friedrich Schiller and John Ruskin*, reinventing or trying to escape the reinvention of the moral-aesthetical wheels that they first invented. Edification is not an ultimately determining factor controlling life nor is it an omnipresent external force but it is that which lives in the gap between the inidual's will and a society's idea of itself as a society.

The exhibition will be infiltrated with replicas of sculptural works by Martin Kippenberger (1953-1997) whose erse artistic output exemplified an artist's confrontation with the legacies of past edifications of art and its history, and which in turn led his oeuvre to be among the most referenced by students in today's art academies. Taking inspiration from the well known 2011 incident in which a cleaning lady mistakenly cleaned a trompe l'oeil puddle painted on a component of Kippenberger's piece entitled 'When it Starts Dripping from the Ceiling',  these copies will be given an everyday use value and become part of other artists' works, remaining largely unrecognizable as Kippenbergers for most visitors.

The exhibition's title references the title of the Kippenberger work that was the subject of the cleaning incident, linking questions generated by the incident's occurrence to larger questions surrounding the notion of edification. Is edification avoidable, escapable, desirable, or is it simply an unavoidable trait? When the cleaning lady removed the faux puddle on Kippenberger's work she put a stop to the 'dripping from the ceiling' that the artist intended to evoke the start of. The exhibition suggests that it is in moments like these that edification's problematic nature reveals itself and signals the need for further thinking about its history and present.

*Friedrich Schiller, (1759 - 1805) was a German philosopher who proclaimed that «only the aesthetic is a complete whole in itself « and took to the view that «beauty gives no inidual result whatever, either for the intellect or for the will; it realizes no inidual purpose, either intellectual or moral; it discovers no inidual truth, helps us perform no inidual duty, and is, in a word, equally incapable of establishing the character and enlightening the mind.» On the other hand, John Ruskin (1819 - 1900) who was England's leading art critic during the Victorian era, in his later years of writing believed in art's ability to improve society. Although, Ruskin supported artists such as William Turner, he also at times questioned the practice of such landscape painters when «No moral end has been answered, no permanent good effected, by any of their works».  Ruskin wrote a series of letters entitled Fors clavigera - Letters to the workmen and labourers of Great Britain (1871-1884), and it was in these letters that Ruskin sketched out the framework for his own utopian world which he called the Guild of St. George, a world where art and life were to merge as one whole.  Both Schiller and Ruskin where in search of a holistic experience that could create harmony between the autonomous inidual or creator and the wider society that that inidual existed in, two different senses of edification for one humanistic end. That today one can identify and distinguish between those who are indirect descendants of Schiller and others who are indirect descendants of Ruskin attests to the power of prior edifications that still live on inside of us in contemporary times.

Lecture by Bassam El Baroni
Of rabbits and dragons
Of rabbits and dragons is a stream of ruminations, questions, and semi-philosophical detours, that attempts to bring together the two current worlds the speaker is rooted in through normal everyday existence and the prerequisites of a profession. These two worlds are life in present day Alexandria, Egypt in the midst of ongoing political struggles and his job as a curator and art critic who happens to be internationally exposed. The title refers to the years 2011 and 2012, the year of the rabbit and the year of the dragon, respectively, in the Chinese zodiac calendar.
On Tuesday the 19th of June, at 7pm in Kadist-office (19bis rue des Trois Frères- 75018) RSVP: assistant@kadist.org

Bassam El Baroni is a curator and art critic from Alexandria, Egypt.
He is the director of the non-profit art space Alexandria Contemporary Arts Forum (ACAF): http://www.acafspace.org/main.html