A survey exhibition of artworks that explore ideas related to the hidden and the unknown, it is a highlight of summer-long Festival of the World. The show will feature over 50 works, both by seminal figures in the history of conceptual art, including Robert Barry, and Art & Language, and more recent artists, such as Tom Friedman, Ceal Floyer and Jeppe Hein, who have responded to their legacy. Contemporary 'Wide Open School' will transforms the lower galleries into a summer school. 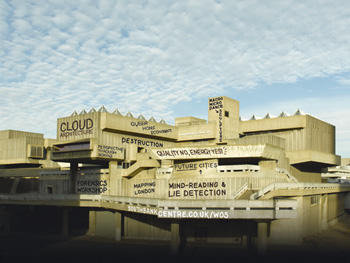 This summer, from 12 June to 5 August, the Hayward Gallery presents Invisible: Art about the Unseen 1957 – 2012, the first UK survey exhibition of artworks that explore ideas related to the invisible, the hidden and the unknown. The exhibition is a highlight of Southbank Centre's summer- long Festival of the World with MasterCard.

From an invisible labyrinth and canvases primed with invisible ink, animals' mental energy and snow water, to an empty plinth that presents space cursed by a witch and a "haunted" black tunnel, the exhibition features works by some of the most important artists from the past half century including Andy Warhol, Yves Klein, Robert Barry, Chris Burden, Yoko Ono, Maurizio Cattelan and Carsten Höller.

The contemporary history of invisible art begins with French artist Yves Klein who in the late 50s embarked on a project of producing immaterial art and architecture, and was the first artist to stage an exhibition devoid of any visible content. The Specialization of Sensibility in the Raw Material State of Stabilized Pictorial Sensibility (La Spécialisation de la sensibilité à l'état de matière première en sensibilité picturale stabilisée), which opened in Paris in May 1958, featured empty white rooms saturated with what the artist claimed to be invisible energy. The exhibition attracted enormous public attention and put invisible art on the map. Many artists after Klein have continued to explore the invisible, and this exhibition, curated by Hayward Gallery Director Ralph Rugoff, will trace the highlights of this history. It will feature over 50 works, both by seminal figures in the history of conceptual art, including Robert Barry, and Art & Language, and more recent artists, such as Tom Friedman, Ceal Floyer and Jeppe Hein, who have responded to their legacy. The exhibition also includes a room dedicated to the tradition of invisible public monuments.

The artworks presented in Invisible: Art about the Unseen, 1957 – 2012 will challenge visitors' assumptions about what art is. Directing attention away from our cultural bias that works of art are inherently visual, the exhibition instead emphasises the ideas behind artworks, the role of visitors' imagination in responding to art, the process of creating art, and the importance of context and labelling in shaping our understanding of what we see.

Ralph Rugoff, Director of the Hayward Gallery, said: "Invisible art challenges our assumptions about art by emphasising its interactive and communicative properties over its visual qualities. Many of the works in Invisible re-direct our attention towards the unwritten rules and conventions that shape our understanding of art. Others underscore the limits of our perceptual capacities or emphasise the role of our imagination in responding to works of art. Still others use invisibility as a metaphor for death and the politically-sanctioned "disappearance" of certain social groups. This exhibition surveys this rich history as it unfolds in the mind of each visitor."

Spanning a range of different practices over the last seven decades, the artists and works presented in Invisible: Art about the Unseen, 1957 – 2012 include:

Yves Klein – one of the earliest proponents of invisible art, Klein embarked on a long-term project between 1957 and 1962 to create an "architecture of air": walls, ceilings and furniture would be made of air, and while these things would exist, they wouldn't be visible. The exhibition includes Klein's architectural drawings, as well as a series of works and supporting documentation revolving around his concept of "le Vide" (the Void)

Andy Warhol: Invisible Sculpture (1985) – an invisible sculpture that Warhol created at New York's Area nightclub by stepping on a plinth and then stepping off, presumably leaving traces of his celebrity status in the plinth"s airspace

Tom Friedman: Untitled (A Curse), 1992 – to create this sculpture, Friedman hired a practicing witch and instructed her to cast a curse on a spherical space, eleven inches in diameter and positioned eleven inches over an empty plinth. Friedman will also be exhibiting 1000 Hours of Staring (1992 – 97), a piece of white paper which the artist stared at for 1000 hours over the course of five years

Gianni Motti: Magic Ink, 1989 – a series of drawings, sketched in invisible ink, which were visible only for a brief instant before vanishing

Jeppe Heine: Invisible Labyrinth (2005) – a maze that only materialises as visitors move around it. Visitors are equipped with digital headphones operated by infrared rays that cause them to vibrate every time they bump into one of the maze's virtual walls. The maze structure spans seven different variants, changing from day to day

Bruno Jakob – over the past 25 years Jakob has devised different means of making invisible paintings, including a method involving exposing a lightly primed canvas to the "energy" of a person, animal or environment. The exhibition will feature a selection of these paintings, inviting the viewer to consider them as an action-based practice rather than a finished product

James Lee Byars: The Ghost of James Lee Byars (1969/1986) – an eerie black tunnel that visitors can walk through, designed to evoke the artist's spiritual afterlife Robert Barry: Energy Field (1968) – a battery-powered transmitter encased in a nondescript wooden box sends out waves of energy, filling the gallery space with an invisible, immeasurable, but nonetheless real force

Teresa Margolles: Aire / Air, Zurich (2003) – an installation consisting of two cooling systems that create a superfine mist by drawing on a container filled with 20 litres of water that was previously used to wash the bodies of murder victims in Mexico City prior to autopsy.

Maurizio Cattelan's Untitled (Denunzia) (1991) – a standard Italian police form that officially documents the artist"s claim that an invisible sculpture had been stolen from his car in Milan.

Lai Chih-Sheng – will create a giant "invisible drawing" by using a pencil to draw over all of the existing lines formed by the gallery"s interior architecture.

Coinciding with the exhibition, the Hayward Gallery presents Wide Open School (11 June – 11 July), which transforms the lower galleries into a summer school, with artists choosing subjects they are passionately interested in and leading seminars, workshops, performances and lectures.

Events programme for the exhibition:
Smells like Teen Spirit
Thursday 14th June at 7pm, Hayward Gallery Lecture Theatre / Wide Open School
Jeppe Hein discusses the topic of invisibility and sensory perception, with particular emphasis on smell. Drawing on his installation Invisible Labyrinth as well as other recent work Hein will explore these themes in conversation with the scientist Robert Müller-Grünow, a scent specialist with whom the artist has previously collaborated. Together, the two will examine synthesizing flavours, offering the audience a unique olfactory experience.

Lecture by Tehching Hsieh
Wednesday 20 June at 7pm, Hayward Gallery Lecture Theatre / Wide Open School
Tehching Hsieh talks about the 21 year period between 1978 and 1999 when he practiced as an artist. Tehching Hsieh revolutionised performance art in America in the late 1970s and early 1980s, and the impact of his work remains profound. In this period, he made six epic durational works; five individual One Year Performances followed by a final work, Thirteen Year Plan. In this ultimate act of self-erasure, the artist intentionally retreated from the art world, making art but not showing it publicly, setting a tone of sustained invisibility.

Southbank Centre’s Festival of the World
1 June to 9 September 2012
Southbank Centre's summer 2012 site-wide Festival of the World with MasterCard opens on 1 June 2012 for the Diamond Jubilee Weekend, and closes on 9 September 2012. As London welcomes the world this summer, Southbank Centre's Festival of the World will include inspirational projects from the UK and around the world, which showcase the power of the arts to change the lives of individuals, communities and whole societies. The site will be transformed with art installations including a giant "robot" sculpture; a colossal baobab tree made from fabric; "Rainbow Park", a multi-coloured beach; and an exhibition in the Royal Festival Hall of the thinkers, artists and communities who have inspired and contributed to the Festival. The reopening of the Queen Elizabeth Hall Roof Garden, weekly food markets, and a pop-up cafe complete the Festival landscape. www.southbankcentre.co.uk/world