For 'Manderley' Stein draws on several interlocking themes. Cornwall is the link, filtered through Daphne du Maurier's eponymous gothic romance. Gibbons is an admirer of Peter Lanyon's paintings. Although she has moved between abstraction and figuration, she believes in the transformative power of painting. 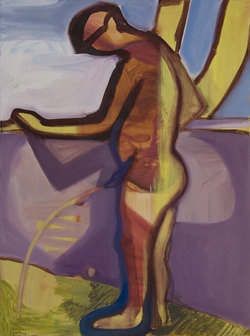 For her new exhibition Lucy Stein draws on several interlocking themes. Cornwall is the link, filtered through Daphne du Maurier's eponymous gothic romance, a postwar Cornish artist and the memory of childhood holidays.

Du Maurier's tale of one woman haunted by another is a leitmotif. Stein's paintings are crowded with ethereal women and men, fairytale creatures who drift enigmatically into view. There are Cornish markers, notably crustaceans, whose presence is significant and something of a fascination for Stein, just as they were for Jean-Paul Sartre. Various interpretations of Sartre's crab hallucinations have been advanced, including an explanation of his philosophy, and it is open to speculation to wonder at Stein's use of the same crustaceans. Stein's psycho-drama is usually located in a partially defined space, which might be a dreamscape. She is interested in the uses of malapropism - that slip of the tongue when one word stands in for another, e.g. 'dancing the flamingo'. Stein's images contain such devices, leaving a trail of misquotes and false directions.

Over her lifetime, Lucy Stein has experienced a psychosomatic syndrome known as sleep paralysis. This syndrome takes various forms. For Stein, it is the spectre of an elderly woman, sometimes a puppet, whose silent presence is malevolent. Stein learnt that the condition is sometimes known as 'Old Hag's Syndrome', although she herself has more accurately described it as 'Orgasms in Hell'. One woman haunting another for Du Maurier and for Stein. There is a third haunting, that of Carole Gibbons' paintings. Gibbons is a distinguished painter living in Glasgow, living, in fact, above Stein's flat. Gibbons who, like Stein, attended Glasgow's School of Art, is a generation older. Her paintings have come to hold Stein in thrall.

Alongside the psycho-dramas, sleep paralysis and recurring psycho-sexual imagery, must be added another source of stimulation. Stein has become interested in Peter Lanyon and his painting. To paraphrase another Sartrean term, 'Existence (paint, canvas) precedes essence (the motivation for creating any particular image)’. Lanyon referred to his landscapes as the interaction of male and female elements, so this explanation, grounded in a materialist motivation, has great appeal for Stein. Lanyon pushed the analogy to its limits in his pink landscapes, those that were clearly nude studies, but presented and titled as landscapes. A malapropism, perhaps. In this body of work Stein has employed Lanyon’s scraping and scratching to etch out her pastoral setting, where space, line and colour are subtly disturbed by psychological narrative.

Carole Gibbons, like Lucy Stein, is an admirer of Peter Lanyon's paintings. Although Gibbons has moved between abstraction and figuration, like Lanyon she believes in the transformative power of painting. Her figures and still lives are as much about the act of painting as of the depiction of objects. Her densely painted surfaces, with their strong colours, are an intimate landscape of painted shapes, impasto and visible brushstrokes. There is long tradition of colour painting in Scotland and Gibbons' work is an outstanding example of this, although the artist's fondness for Spain and its culture are also important in forming her outlook. Gibbons has exhibited widely and her work is in many public collections including Edinburgh Museum of Modern Art, Aberdeen Art Gallery and Museums, and Leeds City Council, Artemis Collection.

Once described by a major artist as Scotland's greatest female painter, Carole Gibbons queried the gender label. She is also known as the artist who turned down Clement Greenberg's offer to visit her studio. There is something in this attitude that is symtomatic of a generation of women pursuing their professional vocation in a male-dominated art world. This will have struck Lucy Stein, keenly aware of the the post-feminist discourse in which she grew up and which was absent in the 1950's, when Gibbons was studying art at Glasgow. Simone de Beauvoir's The Second Sex was only published in English in 1953. Her key insight, that women are made, not born, had to yet to become accepted and internalised as an existential verity, as it was later on and not just by feminists; the psychoanalytic philosopher, Jacques Lacan, arrived at the same conclusion although in his case he believed that both sexes acquire gender identity through social programming. With this in mind, Carole Gibbons' painting can be viewed afresh as those of an artist holding her own, with ease, with the best of them, male or female. The confidence with which the work is executed, is testimony to a lifetime spent working and reworking her world and her ideas.

This is Lucy Stein's fourth solo exhibition at Gimpel Fils and we have invited the artist to continue her tradition of choosing an artist she would like to show with. It is no surprise that Stein should choose Carole Gibbons.