Do you remember the first time? 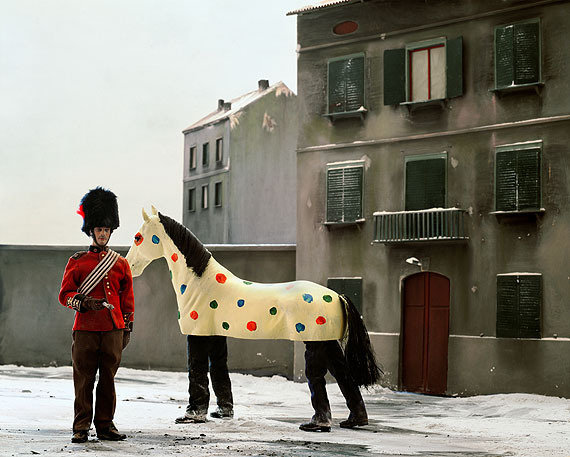 Do you remember the first time? features works by contemporary photographers Olivo Barbieri, Jim Goldberg, Nathan Harger, Adam Jeppesen, and Paolo Ventura, presented for the first time in London exclusively at Atlas Gallery. Many of these exemplary contemporary artists have been exhibited internationally, and are included in museum and distinguished private collections worldwide, but have never before been exhibited in a commercial gallery in the United Kingdom. Do you remember the first time? presents the opportunity to experience with new eyes key works by known artists who are redefining the boundaries of contemporary photography.

Olivo Barbieri (Italy, b. 1954) creates imaginative landscapes and cityscapes, challenging the viewer’s perception of reality and creating seemingly artificial viewpoints of our mundane surroundings. Utilising the technique of selective focusing, Barbieri suspends himself out of a helicopter 200 – 500 feet in the air over his subject. The result is a composition both familiar and unreal, which distorts reality and recreates the landscape into an artistic installation of Barbieri’s conception. ATLAS Gallery presents selections from the artist’s site_specific aerial photographic series, an on-going project focusing on recognisable cities and places in which the artist reminds us of the very thin line between object and reproduction. Works by Olivo Barbieri are included in public and private collections worldwide, as well as museum collections in Europe and the United States, including: San Francisco Museum of Modern Art; International Center of Photography (ICP), New York; GAM Galleria d’Arte Moderna e Contemporanea, Turin; CAAC Centro Andaluz de Arte Contemporaneo, Seville; and Cisneros Fontanals Foundation, Miami. Do you remember the first time? is Olivo Barbieri’s first exhibition at Atlas Gallery.

Nathan Harger (USA, b. 1976) constructs high-contrast black and white photographs of the industrial infrastructure that powers American industry. Focusing his subject matter on man-made constructed material - cranes, bridges, factories, telephone wires - Harger transforms urban infrastructures into abstractions, allowing the viewer to find new meanings in the unfamiliar reality he presents. Educated at the Cleveland Institute of Art and Parsons The New School for Design, Nathan Harger was included in 2009 in the annual “30 Under 30” list of emerging photographers worth watching by Photo District News, nominated for the Santa Fe Prize for photography and the Prix Pictect Photography Price, as well as being the winner of American Photography ‘Images of the Year”. His work is included in the permanent collections of the Cleveland Museum of Art and The Martin Margulies Collection, Miami, Florida. Do you remember the first time? is Nathan Harger’s first exhibition at Atlas Gallery and first exhibition in the United Kingdom.

In 2009 Adam Jeppesen (Denmark, b. 1978) embarked on a journey from the Arctic to Antarctica to create The Flatlands Camp Project. Travelling unaccompanied for an uninterrupted 487 days, Jeppesen documented this long solitary journey through photography stills and film. The subsequent images bear markers of the journey, with grit and dust rubbing on the negatives, leaving the surface scarred and imperfect. The final prints manifest the evidence of the hard experience both in the pictured image and by the visual scars present within the images. In The Flatlands Camp Project Jeppesen fastidiously avoids the typical travel narrative. He instead creates in his work a distinctive style of imagery that lies somewhere between documentary and dream. Do you remember the first time? features works which recreate the memories and experiences of the artist’s journey, through composite photographs pinned together like a patchwork quilt. Adam Jeppesen was nominated in 2009 for the Deutsche Borse Photography Prize and the KLM Paul Huf Award, he is included in numerous public and private collections, including: The National Museum of Photography, Denmark; The Swedish Arts Foundation; Nykredit Fonden; Museet for Fotokunst, Brandts, Denmark; and The Danish Arts Foundation. Do you remember the first time? is Adam Jeppesen’s first exhibition at Atlas Gallery and first exhibition in the United Kingdom.

Paolo Ventura (Italy, b. 1968) constructs scenes he envisions in his mind by creating detailed miniature sets, which he then photographs to appear life-size. DO YOU REMEMBER THE FIRST TIME? features works from Ventura’s recent series, Winter Stories, which follows a fictional elderly circus performer as he recollects his life. Winter Stories captures the fleeting glimpses of everyday life, through the artist’s meticulous rendering of detail and the theatrical presentation of the scene being photographed. The resulting photographs present seemingly whimsical images full with a sense of child-like wonder, while at the same time exploring serious and universal themes of loneliness, love, disappointment and life-dreams. Paolo Ventura has exhibited in Moscow, Verona, Paris, New York, Los Angeles, and Milan; and most recently the artist represented Italy in the Venice Biennale. Do you remember the first time? is Paolo Ventura’s first exhibition at Atlas Gallery and first exhibition in the United Kingdom.

Alongside the artists featured in this exhibition, there will also be work by Jim Goldberg (USA, b. 1953), an artist represented by Magnum Photos and Atlas Gallery. Goldberg´s work focuses on documenting the neglected, marginalized and unfairly treated communities through an intimate and human approach. His use of different media, such as Polaroids, video, written text, ephemera and large and medium format cameras provides his work with a unique style and sensitivity. Goldberg won the Henri Cartier-Bresson Award in 2007, and the Hasselblad Award in 2001 and 1980. His work is in numerous private and public collections including NYMOMA, SFMOMA, Whitney, Getty, LACMA, Corcoran, MFA Boston, Hallmark Collection, The High Museum, Library of Congress, MFA Houston, National Museum of American Art, and the Art Institute of Chicago.

Atlas Gallery was established in 1994 with a specialist focus on classic and modern twentieth century vintage photography and photojournalism. Do you remember the first time? is the inaugural exhibition in a new gallery programme which will include, for the first time, a specific contemporary focus within the Atlas Gallery calendar of exhibitions.

Opening reception on Thursday, June 14 from 6 to 8 pm