The exhibition features video, sculpture, performance, installation, collage, and craft-based projects by sixteen artists who draw from the cultural references and contexts of Afghanistan, the Caribbean, China, India, Iraq... 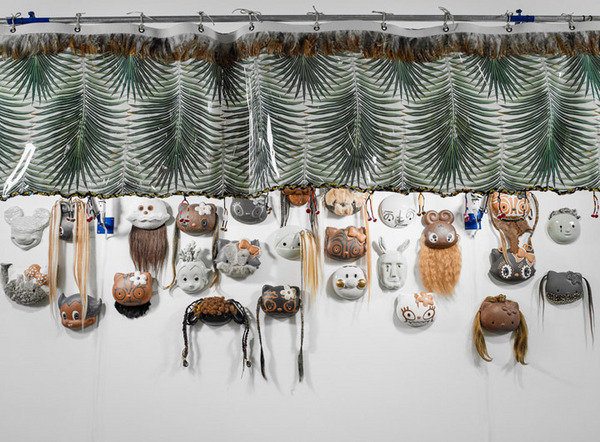 Cultural Transference presents recent artwork by sixteen international and New York-based artists whose practices are actively engaged with the transformation of culture in contemporary art and everyday life. Through transactions and exchanges – social, spiritual, economic, and political – artworks featured in the exhibition collectively express how cultural practice is reciprocally changing and being changed by its context. Depending on the mobility of those in the role of producing culture and those who consume it, the transmission of culture can move quickly or slowly through space and time.

The exhibition features video, sculpture, performance, installation, collage, and craft-based projects by artists who draw from the cultural references and contexts of Afghanistan, the Caribbean, China, India, Iraq, Japan, Mexico, New Zealand, Palestine, Poland, and the United States, among other places. Together, the artists' projects communicate the areas where cultures and cultural production mutate, are appropriated, and remixed resulting in experiences that push against stereotypes, and defy the logic of accepted cultural mores.

There are several aesthetic and conceptual parallels and intersections amongst the artists’ processes. A number of the artists use collage techniques to convey the potential for cultural acceptance and change. From Firelei Baez's collages on book pages to Shinique Smith's assemblages that incorporate discarded objects and graffiti, and Yoko Inoue's masks which collapse aspects of pop, spiritual, and commodity culture, one can perceive shifts and recombinations of cultural references, both abstract and literal.

Hubert Czerepok's film and companion light installation question the stability of ideological symbols and positions, while LoVid's video objects and digitally produced and handcrafted textiles blur visual information into possibilities for new folk art. Allison Smith and Matthew Cowan have long explored folk traditions through artistic means: performance, sculpture, video, craft, and other ephemera. Cowan’s projects highlight the peculiarity of long practiced customs, toeing a fine line between homage and parody, while Smith’s recent collages examine the fetishization of patriotic objects suggestive of colonial era American craft. In a related vein, Pablo Helguera’s has long focused on the preservation of cultural traditions and languages on the verge of disappearance. Works by Christopher K. Ho and Elisabeth Smolarz consider the nature of labor in relation to geographic location. Highlighting the gaps between the creative and working classes, their works reflect on how the location of production informs its value in the greater economy.

Of course, there are times when cultural exchange is met with resistance from individuals, institutions, and ideological camps. Dread Scott and Kyle Goen’s recent performance staged in Times Square, entitled United We Stand Stand challenges post 9/11 patriotism in New York City through the sale of nationalistic souvenirs, questioning the United States’ occupation of countries in the Middle East. Umesh Maddanahalli and Juliana Irene Smith both offer more specific narratives in which the boundaries of cultures become apparent. Smith, whose artwork is concerned with human desperation and the politics of belonging, has recently produced paintings that extend to sound and sculptural installations reflecting on the prescience of Mark Twain’s literary excursion to the Holy Land. In a contemporary European context, Maddanahalli’s project humorously examines how national identification might play out in private life.

Dominican-born Nicolas Dumit Estevez’s Born Again is a community-engaged, performative act of becoming. In the spring of 2011 he set out on a journey through various community spaces in the Bronx, culminating in being born again as a native Bronxite in a ritual along the banks of the Bronx River. Estevez’s project demonstrates that transformation is possible, so long as it is not imposed by external forces.

Curator's bio:
Sara Reisman is Director of New York City's Percent for Art program which commissions permanent artworks for City-owned public spaces. Recently commissioned artists include Mary Miss, Ben Rubin, Odili Donald Odita, Karyn Olivier, Tattfoo Tan, and Mary Mattingly, among others, all working in diverse media and themes. Reisman has organized exhibitions and written about public engagement and public art, social practice, the aesthetics of globalization, and site- specificity for the Philadelphia Institute of Contemporary Art, Queens Museum of Art, The Cooper Union School of Art, Smack Mellon, The Bronx Museum of Art, Socrates Sculpture Park, Momenta Art, Aljira, the Kunsthalle Exernergasse, and the Museum of Contemporary Art, Banjaluka, Republic of Srpska, among others. Reisman was the 2011 Critic-in-Residence at Art Omi, an international visual artist residency in upstate New York, and is the inaugural guest curator in 2012-2013 at Forever & Today.