The exhibition presents eighty oil-on-paper studies, some of which have never, or only rarely, been seen before, revealing a painter with an intense fascination for colour and its multiple associations. 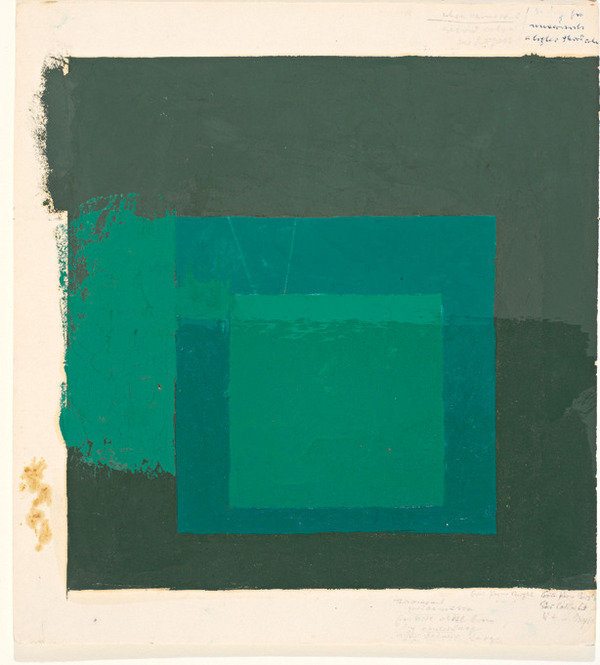 This is the first exhibition of Josef Albers’ (1888-1976) work in Portugal. Albers left an indelible mark on twentieth-century European and American art. He is mainly known for his series Homages to the Square, which he painted between 1950 and 1976, and for the academic posts that he held at the Bauhaus in 1925, at Black Mountain College in North Carolina from 1933, and as Head of the Department of Design at Yale University between 1950 and 1958. He is also known for his innovative study of colour – The Interaction of Color – published in 1963.

The exhibition presents eighty oil-on-paper studies, some of which have never, or only rarely, been seen before, revealing a painter with an intense fascination for colour and its multiple associations. “I can get the gloomiest gray to dance,… I love to make a very poor color rich, to let the adjacent colors make it beautiful.”

Albers is one of the mythical figures of the Bauhaus, the school to which he was linked as a student and teacher between 1920 and 1933, the year in which it was shut down by the Nazis. Following the closure of the school, Albers and his wife Anni, who was also an artist and teacher at the Bauhaus, went to the United States after being invited to set up the art department at Black Mountain College.

The move to the USA liberated the artist, “allowing him to become a real painter”, in the words of the exhibition’s curator Michael Semff. Albers allowed himself to be inspired by America's unspoilt nature and by the pre-Columbian architecture, sculpture and textile art of Mexico, which he visited for the first time in 1935 and which led him to use radiant and wilful plays of colour such as had never previously been seen in modern European painting.

The paintings on paper featured in the exhibition are arranged according to three distinct series: Kinetics (eleven works executed between 1938 and 1946), Adobes (thirteen paintings dating from 1948 and 1949), and fifty-five works from Albers’ most famous series, Homages to the Square (1950–1976), in which the spatial effect of colour is intensified to the maximum.

The exhibition sets up an encounter with Albers’ creative process, from examples of applications of pure colours to studies of chromatic variations, with countless notes on the colours used and their manufacturers, to finished paintings ready to be executed on platex, the artist’s favourite support. From 1940 onwards, Albers began to apply colour in a way that would become characteristic of his work, eschewing the use of traditional brushes in favour of a palette knife with which he spread the paint across the paper, creating “colour fields of an almost tactile vitality”(Michael Semff).

A student and teacher at the Bauhaus, Albers distanced himself from the German expressionist art of his contemporaries, preferring an approach that was more impersonal and abstract without ceasing to be emotive. He undertook a study of colour that was as passionate as it was methodical, publishing a work – Interaction of Color (Yale University Press, 1963) – that continues to be a key text for students of art.

The exhibition was organised by the Josef Albers Museum Quadrat Bottrop and by the Staatlich Graphische Sammlung of Munich, and received generous support from the Josef and Anni Albers Foundation, Bethany, Connecticut, USA.

Before being presented at the CAM – Gulbenkian Foundation in Lisbon, and after opening in Munich in December 2010, the exhibition travelled to the Josef Albers Museum Quadrat, the Louisiana Museum in Copenhagen, the Kunstmuseum Basel, and the Pompidou Centre in Paris, where it was considered by Beaux Arts magazine to be one of the most significant exhibitions held in France in 2012. After Lisbon, the exhibition's journey will reach its final destination, the Morgan Library & Museum in New York, in October 2012.

Centro de Arte Moderna Calouste Gulbenkian Foundation
Rua Dr. Nicolau de Bettencourt 1050-078 Lisboa Portugal
Hours:
Tuesday to Sunday 10:00 to 18:00. Last admission at the museum at 17:45
Closed on Mondays.
Admission:
€ 3.00 to € 5.00 (Price varies according to the exhibition held and does not include museum itineraries)
1 museum and Temporary Exhibition Gallery: 5,00 €
2 museums and Temporary Exhibition Gallery: 7,00 €
Children under 12 free