Entre: focused on works from the 1970s, the onset of Antoni Muntadas' artistic career, this exhibition allows us to make contact with a series of works which boast a remarkable conceptual and creative vitality. Between Spaces presents more than 20 works from its collection, all produced between the late 1960s and 2011. Sculptures, photographs, installations, paintings and videos suggest the presence of an indeterminate or undefined space. 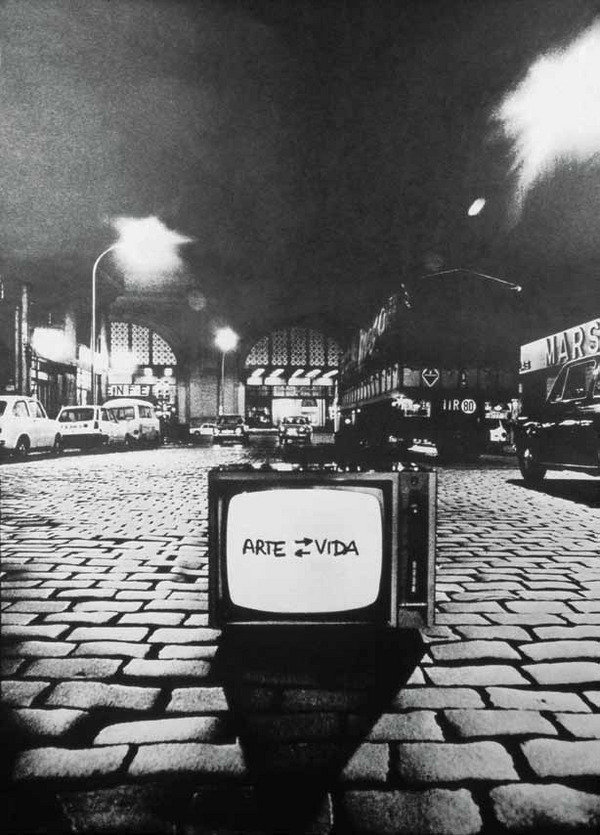 The exhibition Between by Antoni Muntadas (Barcelona, 1942) at CAM – Calouste Gulbenkian Foundation is a selection from the broader show recently presented at the Reina Sofia National Museum of Art.

Focused on works from the 1970s, the onset of Muntadas’ artistic career, this exhibition allows us to make contact with a series of works that were never before seen in Portugal and which boast a remarkable conceptual and creative vitality.

Also noteworthy is the entire occupation of gallery 01 with a rarely shown installation, Exhibition (1987), a remarkable work in which the institutional critique, the rigor of means and the reflection on the very own museological mechanisms is taken to an extreme of refinement and of communicational efficacy - some of the characteristics that run through all of the artist’s oeuvre.

The exhibition Between Spaces, presented in the level 0 of the CAM, brings together more than twenty works from its collection, all produced between the late 1960s and 2011. Sculptures, photographs, installations, paintings and videos suggest the presence of an indeterminate or undefined space, a gap – between the lines, planes, margins, bodies, territories - spaces between that leave open the possibility for actions, happenings, narratives, affirming themselves as spaces for possible or potential encounters, which sometimes can be deceptive, or inconclusive.

Entre Espaços establishes a dialogue with the exhibition Entre/Between by Antoni Muntadas, which occupies part of the level 0 and level 01 of the CAM, which the visitor must necessarily cross before reaching Entre Espaços. This creates a permanent play between the architectural space of the CAM and the physical space that exists between the works.

Created in 1983, Calouste Gulbenkian Foundation’s CAM – Centro de Arte Moderna - is devoted to preserving, investigating and exposing to the public its collection: which holds numerous artworks from the 20th and 21st centuries.
CAM annually organizes various temporary expositions based on works of both Portuguese and international artists. Additionally it exhibits one permanent exhibition comprising of a selection of artworks from the Museum’s repertoire.

CAM - Hall, Room A and B, Level 0 and Level -1
Centro de Arte Moderna Calouste Gulbenkian Foundation
Rua Dr. Nicolau de Bettencourt 1050-078 Lisboa Portugal
Hours:
Tuesday to Sunday 10:00 to 18:00. Last admission at the museum at 17:45
Closed on Mondays.
Admission:
€ 3.00 to € 5.00 (Price varies according to the exhibition held and does not include museum itineraries)
1 museum and Temporary Exhibition Gallery: 5,00 €
2 museums and Temporary Exhibition Gallery: 7,00 €
Children under 12 free