Moving Bodies. She defied the expectations of her class and her sex to live a life of tireless experimentation in art. The drawings have a connection to the famously skeletal sculptures of Alberto Giacometti. 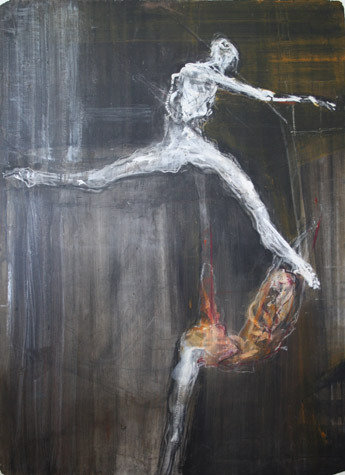 To see the touching of hand and hip, of hip and thigh, of hip and shoulder, as the dancers revolve around each other is to feel an immense sympathy for the body, as though, by showing us its strength and suppleness, we are called upon to consider it as vulnerable, a fragile being with a brief existence.1

One of the most innovative British artists of the twentieth century, Isabel Rawsthorne's paintings have lain unseen for decades. Now, in her centenary year, The New Art Gallery Walsall give a glimpse of some of her lost works. Royal Academy scholar and assistant to Jacob Epstein, Rawsthorne defied the expectations of her class and her sex to live a life of tireless experimentation in art. Her rejection of the fashionable styles of surrealism and abstraction in favour of the difficulties of the 'real' alienated her from many of her peers, but brought her close to two great adventurers in this area, Alberto Giacometti and Francis Bacon.

Rawsthorne looked at the animal and human body and was as at home in the zoo or the museum as the gallery. In the 1920s she was part of a rebel group of men and woman students at Liverpool College of Art who posed for each other (study from the nude was strictly segregated and draped). After this, the Royal Academy seemed rather stuffy and by the 1930s Rawsthorne had fetched up in the more liberal life room of the the Académie de la Grande Chaumière in Paris. After twenty years at the heart of the Left Bank, Rawsthorne returned to London and transferred her attention to drawing in the practice room of the Royal Ballet. She saw this as a natural progression from the still figure to the moving figure.

Rawsthorne felt it was important to know the people she painted. Throughout the 1950s and 60s, she observed friends such as the prima ballerinas Margot Fonteyn and Antoinette Sibley and their dancing partners such as Rudolph Nureyev. These are now iconic names in the history of dance, but for artists of Isabel’s generation, the inheritors of the age of Serge Diaghilev and the Ballet Russes, dance was the cutting edge of the avant-garde, a potent synthesis of new music, art and physical expression. Both Rawsthorne and Fonteyn brought daring and self-determination to their fields. They had also loved and lost the same man, Constant Lambert, Artistic Director at Covent Garden, who died suddenly at 46.

The drawings in this exhibition have a connection to the famously skeletal sculptures of Alberto Giacometti, but their breath taking dynamism is different. Both Rawsthorne and Bacon sought a new language of movement. Bacon used Eadweard Muybridge's stop motion photographs as an aid to this. For Rawsthorne the repetitive routines of the dancer multiplied in the practice room mirrors were Muybridge in life, ‘non-stop motion’, if you like.

The extreme and fleeting poses provided Rawsthorne with an exceptional test and an exceptional opportunity ‘to define the excitement of watching a living body in movement’. She showed the bones and muscles as they changed and tried out blurs, multiple views and anamorphic form. Most importantly she saw drawing itself as movement, every mark is a motion: a flick of the pencil or a loop of ball-point pen, a line of charcoal charging across the paper, a peak or smear or splash of paint, registering physically on the body of the viewer.

Rawsthorne was fascinated by the apparitional effects of the practice room lights and mirror reflections. The studios are places of space great beauty with walls of glass... where the individual body can be seen at any distance' She came to understands the importance of the grid-lines on the floor, in showing off the actions of the dancers. All of her drawings include these lines.

Rawsthorne was the 'missing link' between French and British modernism. No post-war artist was so immersed in Parisian culture or so crucial in introducing Existential ideas and imagery to the London scene. Identified by the critic David Sylvester, with Bacon and Freud, as at the forefront of the British avant garde, she was the first of these to exhibit at the Hanover Gallery .

So why isn't Rawsthorne a household name? Only partly because she was a woman; In 1951, personal tragedy whisked her into obscurity and, unimpressed by her taste of the art world, she worked on in near secret, exhibiting rarely and showing her work only to a few fellow artists. Movement from the Ballet La Bayadère I and II, the culmination of her dance studies, were displayed at the Marlborough Gallery in 1968. The second was purchased by Bacon; the first is the centre piece of this show.

Isabel Rawsthorne grew up in the interwar depression and trained, from 16, at Liverpool School of Art, before winning a scholarship to the Royal Academy. She worked in the studios of Jacob Epstein, but her artistic soul mate was Giacometti. Always a free spirit, she held her first solo exhibition at 21 and made her name as an avant garde painter in the 1940s.

The moving body has challenged artists since pre-historic times; the dancer’s body has preoccupied them for nearly as long. In the twentieth century dance became a motif for the effervescence of our modern life. Rawsthorne’s dancers have a pale beauty but are not romanticised; tense calves, warped feet on point and angled clavicles sharpen their strangeness and preserve a sense of working limbs.