Project Space: Stage and Twist. The exhibition examines the way twentieth century history is both re-staged and twisted by these artists as a means to engage critically with the present day. Rather than glorifying the past, Molska and Muresan use history to question collective and individual experience in the post-Communism era, cheerfully accepting the failures and shortcomings of contemporary society. 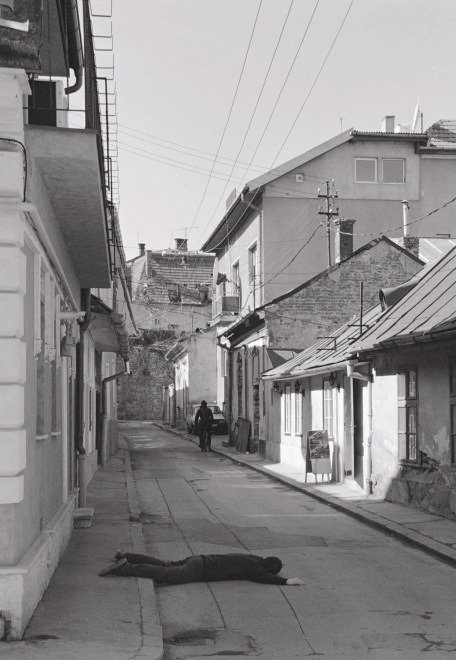 Stage and Twist brings together Polish artist Anna Molska and Romanian artist Ciprian Mureşan for their first exhibition in a London museum. The exhibition examines the way twentieth century history is both re-staged and twisted by these artists as a means to engage critically with the present day. Rather than glorifying the past, Molska and Mureşan use history to question collective and individual experience in the post-Communism era, cheerfully accepting the failures and shortcomings of contemporary society. Organised in collaboration with the Museum of Modern Art in Warsaw, Stage and Twist is the first exhibition to be held in the newly titled Project Space – formerly Level 2 Gallery – Tate Modern’s dedicated space for emerging and recently established international artists.

Anna Molska was born in Prudnik, Poland in 1983 and lives and works in Warsaw. Her films revisit the history of the avant-garde and its belief that art can improve society. Tanagram 2006-07, for example, depicts two semi-clad young men playing a large-scale version of the Chinese geometric puzzle of the same name. The men assemble large black puzzle pieces into a square on a white floor, alluding to Kasimir Malevich’s groundbreaking painting Black Square 1915. The exhibition also includes W=F*s (Work) and P= W;t (Power) 2007-08, a two-screen video installation which contrasts manual labour with mechanical power by juxtaposing a group of workers building a pyramidal structure out of scaffolding, with the high-velocity firing of a squash ball cannon. In doing so the artist calls into question the conditions of the collective and the role of the individual within it.

Ciprian Mureşan was born in 1977, and lives and works in Cluj, Romania. His works include video, sculpture and drawing, which often appropriate key works of modern art and literature and twist their meaning with subtle and ironic gestures. Leap Into the Void, After Three Seconds 2004 re-enacts Yves Klein’s iconic image of himself jumping from a ledge, but in Mureşan’s version the artist lies sprawled on the ground having hit the pavement three seconds after his leap. In comparison to Klein’s liberating artistic gesture, Mureşan reduces the act to its literal consequences and thereby highlights the precarious situation of artists in contemporary Romania. In a tribute to John Cage’s silent piece of music, 4’33’’ 2008 is a film which slowly moves through an abandoned factory for four minutes and thirty-three seconds, commenting on the decline of local industry in the wake of privatisation. Other works in the exhibition include Incorrigible Believers 2009, in which Mureşan ‘completes’ Franz Kafka’s unfinished novel The Castle, and Choose… 2005, in which a young boy pours together Pepsi and Coke, playing with the codes of consumerism.

The exhibition is a collaboration between Tate Modern and the Museum of Modern Art in Warsaw.

The Project Space series has been made possible with the generous support of Catherine Petitgas.

Project Space at Tate Modern (formerly the Level 2 gallery) is dedicated to presenting contemporary art through a series of collaborations with cultural organisations around the world. The gallery has recently been renamed to better represent the international and experimental nature of the programme. It also addresses a change in the numbering of levels in the building due to the Tate Modern Project.

The Project Space programme brings together emerging curators from both Tate Modern and other international venues for contemporary art to work together on an exhibition for both locations. Based on curatorial exchange and dialogue, the series showcases the work of new, recently established or rediscovered international artists. The exhibitions therefore open up the possibility of introducing new work and interpretations within differing global contexts. The curatorial exchanges are organised in collaboration with Gasworks.

This series of discursive exhibitions began in 2011 and, to date, has included collaborations with institutions in Amman, Lagos, Istanbul, Mexico City and Warsaw. Forthcoming exhibitions are being developed with partners in Cairo, Lima and New Delhi. The Project Space series aims to explore the most challenging art of today as well as the complexities of operating within a global context for contemporary art.