Known for his 'Invisible Man' photo-performance, Bolin has also through the years been working on different subsequent themes and media, as sculpture for instance. 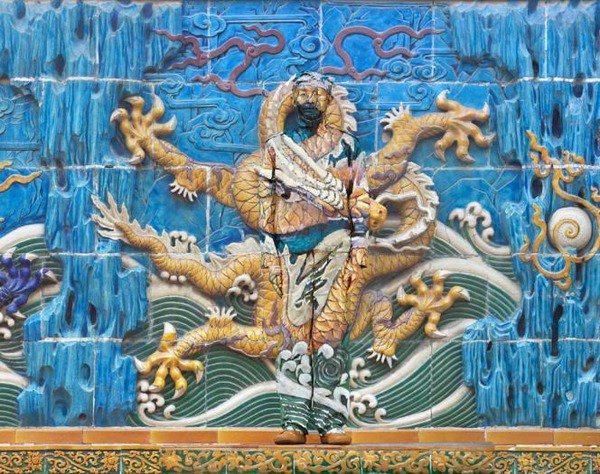 Liu Bolin (刘勃麟) is born in 1973 in China where he lives and works. For the first time ever MD Gallery in Shanghai presents a complete line of his work from his beginnings until now. Known for his “Invisible Man” photo-performance, Liu Bolin has also through the years been working on different subsequent themes and media, as sculpture for instance. Liu Bolin uses the city around him as a backdrop, painting himself to blend in with a landscape in constant flux.

By literally blending into the city, Liu creates a tension that challenges the viewer to question what is on and beneath the surface. For Liu, the most important element of his images is the background. Each image requires meticulous planning and execution: as both artist and performer, Liu directs the photographer on how to compose each scene before entering the frame. Once situated, he puts on a monochromatic uniform, which he wears for all of his Invisible Man photographs and, with the help of an assistant and painter, is painted seamlessly into the scene. This process can sometimes take up to 10 hours with Liu having to stand perfectly still. Although the end result of Liu’s process is the photograph, the tension between his body and the landscape is itself is important.

Liu Bolin’s work has been exhibited in museums around the world. Also known as "The Invisible Man", Liu Bolin's most popular works are from his "Hiding in the City" series; photographic works that began as performance art in 2006.

Since his first solo shows in Beijing in 1998, Liu Bolin’s work has received international recognition. Among other international venues, his distinctive photographs and sculptures have been shown at the major contemporary photography festival Les Recontres d'Arles and he had solo shows at Dashanzi Art Zone in Beijing (2007) to the Forma Foundation for Photography in Milan (2010).

Magda Danysz Gallery
Shanghai, 188 Linqing Road (near Pingliang Road)
Open from Tuesday to Sunday from 11AM to 6PM
Admission free