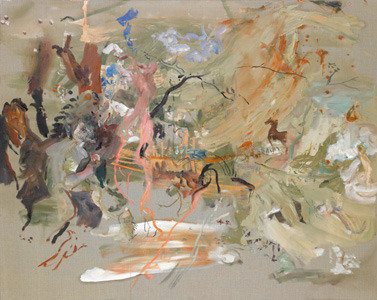 The Essl Museum is giving the London- born painter Cecily Brown (*1969) her first large-scale museum presentation in Austria. It will show completely new works and a block of work with drawings that come directly from her studio in New York. The basis of the exhibition is formed by five of Brown’s works from the Essl Collection, which are supplemented by international loans. The result provides a retrospective of the artist’s work over the last decade.

Cecily Brown’s gesturally expressive works inhabit the boundary between figurative painting and abstraction. The daughter of the British art critic David Sylvester feels herself to be inseparably linked with the history of painting and has concerned herself among others with artists such as William Hogarth, Francis Bacon and Willem de Kooning. For her large-format canvases, which at first glance often appear completely abstract, she uses various sources: individual figures or objects are taken over fragmentarily from lifestyle magazines and erotic magazines, but also from children’s books or from art-history, and placed in abstract surroundings dissolved in pure colour. From London to New York.

As a young painter, in the mid 1990s Cecily Brown decided to move from London to New York. Her early work with pronounced sexual portrayals sometimes described as pornographic, simultaneously impressed and provoked, and caused discussions in the art and gallery scene, not least also because of her special command of painting. For the artist, visual perception, the physical act of looking, which can extend to voyeurism, plays an essential role. The fluid transition from figurative to abstract parts of the image is consciously employed by Cecily Brown in order to invite the observer to linger longer over her paintings.

Enigmatic and melancholic
The Essl Museum owns some of the artist’s more recent works, which she herself describes as “enigmatic and melancholic”. In recent years Brown has overwhelmingly concerned herself with landscape paintings, in which well-known motifs from paradise scenes are often integrated (e.g. Study After “Paradise” 3, 2003). The oil painting Tripe with Lemons (2004), predominantly in yellow tones, conveys a particular freshness and lightness. It appears like an abstract landscape, but beneath it there are also recognisable motifs, such as animals or fruit from a still life. For Brown herself this painting is particularly balanced in the mixture of abstract and figurative elements.
In her new work Cecily Brown once again takes a look at the theme of “Fallen Paradise”. Viewers can explore image motifs such as gardens, saints, demons, animals and memento mori. The paintings are supplemented by very current monotypes straight from the studio. The artist prefers this printing technique, which can be directly transferred to painting. In contrast to other printing techniques, monotypes allow just one print on paper. The exhibition in the Essl Museum will make the work of this internationally very recognised painter accessible to a wider audience in Austria for the first time.

Catalogue
The Essl Museum will publish a catalogue with numerous pictures and reference materials, with a preface by Karlheinz Essl, a text by Jim Lewis and an interview with Cecily Brown by Silvia Köpf. Art Eductaion