Featuring over a dozen artists working in sculpture, installation, performance, photography, painting, and video, the exhibition brings together a suite of idiosyncratic practices that seemed to draw on and put into perspective the larger questions driving art making in Belgium today. 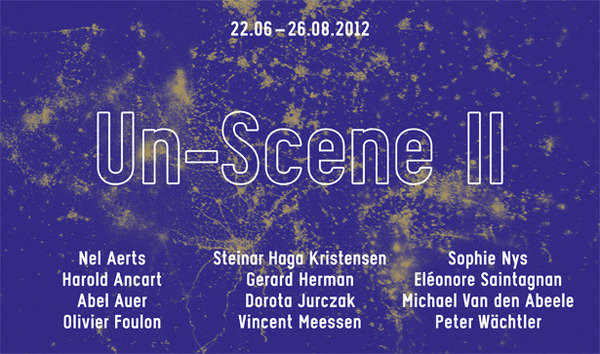 Belgium, one might say, has no single art scene. Or it may be, perhaps, more accurate to say that Belgium, built as it is on divergent historic, linguistic, and cultural foundations and given its essentially irreverent attitude towards anything that would package it into a clear and tangible unity, has managed to resist having a "scene" at all. In this context, the exhibition Un-Scene II concentrates on what some might, in shorthand, call the emerging Belgian art scene. But with its play on words, which stresses both what appears and does not appear to constitute a coherent "scene," this exhibition is instead an attempt to sketch out an inevitably subjective portrait of a particular place, time, and set of singular artistic concerns-as these are played out in the work of young artists, some Belgian by birth, and some who have chosen Belgium as the specific context in which to develop their work. Un-Scene II is the second edition of what is now a triennial tradition at WIELS, an integral part of its ongoing research into the practices and questions that animate the artistic life around the institution. While featuring over a dozen artists working in sculpture, installation, performance, photography, painting, and video, the exhibition brings together a suite of idiosyncratic practices that seemed, with their specific idioms, to draw on and put into perspective the larger questions driving art making in Belgium today.

4PM : Guided visit of Un-Scene II with Momus
Nick Currie, more popularly known under the artist name Momus, is a songwriter, performer, and former journalist for Wired. Momus appeared as The Unreliable Tour Guide during the Whitney Biennial in 2006. "Bewildering crowds with his unique commentary," said the New York Times, "Momus is an official, if unorthodox, part of the biennial, with remarks that range from playful to political to absurd." He's since performed his signature tours in museums and galleries from the Nobel Museum in Stockholm to Mu Gallery in Eindhoven, MUDAM in Luxembourg and Schirn Kunsthalle in Frankfurt.
In his other incarnation as a singer, Momus has just released his 22nd full-length song album, entitled Bibliotek. He's also the author of three books of satirical metafiction, one about jokes, one about Japan, and one about his homeland of Scotland. Momus lives in Japan.
At WIELS, and at the suggestion of artist Abel Auer, Momus will act as the "unreliable" tour guide of Un-Scene II, performing an idiosyncratic and spontaneously conceived commentary on the exhibition for his audience.
http://imomus.com/

5.30PM : Restoration of "Pissing Man and Pissing Woman" by Steinar Haga Kristensen
For Un-Scene II, Brussels-based Norwegian artist Steinar Haga Kristensen has developed an installation in the form of a domestic pavilion within and around which he gathers many of his works – whether old, altered or new. Among these is Pissing Man and Pissing Woman, which he first painted in 1999, then painted over in 2001, when he started art school, and which, in 2009, he tried to restore to its youthful original, to no avail. The painting will be restored by professional at WIELS over the course of the show as an ongoing performance directed by the artist and available at punctual moments for viewers to see.
Performed with the aid of Claire Dupuy, professional in conservation and restoration of artworks, specialised in paintings.