In this group presentation, very diverse artistic positions kaleidoscopically piece together an heterogeneous image by way of the narratives, sensitivities or possibilities of a city that more than once had to rethink itself over very short periods. 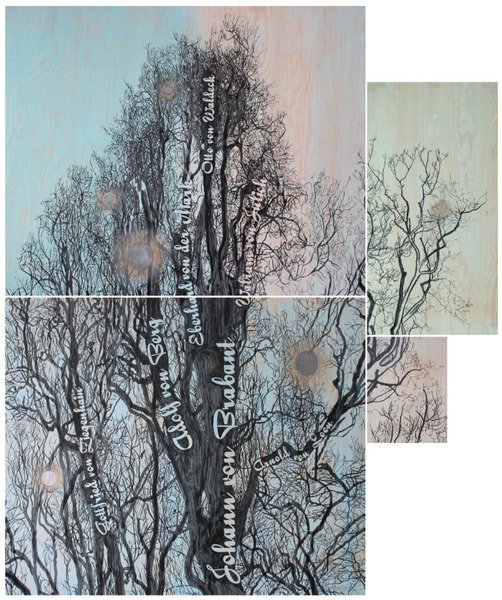 The starting point for the exhibition NACH BONN – Eine Montage is a text by writer LARS BRANDT (*1951, Berlin), which he wrote especially for this project. BRANDT, one of the most distinctive seismographers of the city of Bonn’s transformation, has put together his text Bonn. Montage exclusively from quotations. These extend from Goethe via Conrad to Dubuffet and introduce a polyphonic ambience that can be experienced in every city and further unfolds in the exhibition. In this group presentation, very diverse artistic positions from Bonn and the outlying region, as well as artists who only know the city via medial transmission, kaleidoscopically piece together an heterogeneous image by way of the narratives, sensitivities or possibilities of a city that more than once had to rethink itself over very short periods.

“Sedate Bonn” was turned into Germany’s capital in 1949, lost this role 41 years later and is now a medium-sized city with an illustrious history. In its recent past it has gone through an impressive transformation, which remains relevant for its future. Against this backdrop, the “nach” [after/to] in the exhibition title points not only to a spatial, but also to a temporal dimension: What could make up this city’s selfhood after it has had to undergo radical changes? Instead of seeking answers in statistics or sociological studies, the exhibition presents artistic positions that draw on personal perspectives in the city and bring, not didactic depictions to light, but their own playful narratives for Bonn.

The heterogeneous aesthetics of the works on show reflect the manifold capability of the city to transform itself. In this perspective, the contribution of ALEXANDER BRAUN (*1966, Dortmund) studies change as a dialectical process. New pictures, sculptures and a film allude to the 1288 Battle of Worringen, which changed, long term, the power relationships in the region. In a similar way, TIMO SEBER (*1984, Cologne) has reflected on how to stage the image of the one-time capital. His grandfather’s thorough documentation of Bonn’s glorious past serves him as the basis for his engagement with an occasionally bourgeois-nostalgic self-description, somewhere between fiction and pride. GERNOT WIELAND (*1968, Horn/Austria), in his performative and sculptural works, addresses the city as a place of interpersonal encounters. In his works for the exhibition, the artist weaves his personal experiences with stories of Bonn and brings opposites together, such as the familiar and the unfamiliar, closeness and distance.

JAKOB KOLDING (*1971, Albertslund/Denmark) for his part remains consciously at a distance. He mounts collages of found picture material about the city that circulate on the Internet and intertwines it with various pictorial sources. Like most, he knows Bonn only as a “familiar stranger”, whose former status generated a worldwide media presence, TV images and headlines, but at bottom was only experienced on the media level. YORGOS SAPOUNTZIS (*1976, Athens) in his performative praxis seeks a direct engagement with the place and its inhabitants. Thus his wall object —that in its flexible textile quality suggests the changing dynamics and flexible shaping processes of the city of Bonn— was produced in collaboration with elementary school children from the “Südstadt” part of town. The artist GOSHKA MACUGA (*1967, Warsaw), in her contribution, focuses on the social positioning of visual art. Taking as a starting point Picasso’s Guernica, one of the most famous anti-war paintings of the 20th century, she refers critically to the recent history and the mission of the UN, now also located in Bonn. At a further level, MACUGA questions the representation of political power by art, as well as the political effect an artwork has.

NACH BONN – Eine Montage puts its trust in art’s ability to generate new images and concepts and offer stimulation for discussions and a sense of community. At a stage in which the city is renegotiating its own position and its role vis-à-vis culture, this exhibition would like to remind us that we can find in art an imaginative power for the future.