Squeeze: a big installation of works on canvas and a series of sculptures made of absolutely fine concrete, where the artist explores the matter of the body through a vivid and personal tool such as casts of inflatable dolls. 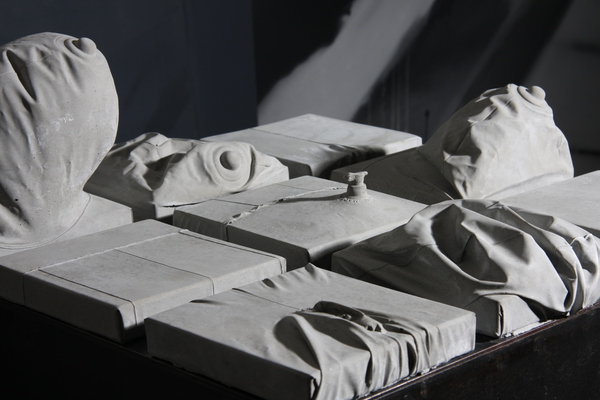 Delloro Contemporary Art is pleased to announce Squeeze, the first solo show in his Berlin venue of Andreas Zingerle.

Squeeze means something connected with the manipulation of shapes and materials. Andreas Zingerle freezes the sexual imaginary linked to the body of the individual and to its collective bestowal in his concrete molds of erotic toys. He investigates the linguistic conventions produced by the commercial exploitation of the body, and encourages a re-thinking of the artificial nature of desire, always with a hint of irony.
The shapes of the inflatable dolls are frozen once and for all in a concrete grip and they go from the perishability of plastic and the instability of compressed air to the specie aeternitatis of a new, unknown material. In this way, Zingerle converts the apparently exciting lie of the undamaged doll into a concrete clamp of de-structured forms, at times so tangled to become unrecognisable at first glance, recalling, in their dry dramatic force, the plaster casts of the victims of Pompeii and Herculaneum.

This exhibition focuses on a big installation of works on canvas and a series of sculptures made of absolutely fine concrete, where the artist explores the matter of the body through a vivid and personal tool such as casts of inflatable dolls. Human forms are therefore perceived as sexual wrecks, whose perfectly polished skin emerges from the deep circumvolutions and curves given by the artist’s work of deformation.

Andreas Zingerle was born in Bressanone, Italy in 1963, he lives and works in Perca.
From 1993 to 1999 he studied at the Accademy of Fine Arts in Munich with professor Hans Baschang. After getting the degree in 2000 he became assistant in the Accademy in 2002.
From 1998 he exhibit in Italy and Germany in private galleries and public spaces such as the Galerie Alfred Knecht in Karlsruhe in 1998, Stadtische Galerie in Neuburg am Donau in 2000, Galerie Prisma in Bozen in 2001 and 2011, Haus der Kunstler Munich in 2007, Galerie Goethe in Bozen in 2009.
Special note should be made of his live performance with five concrete mixers at the Transart Festival in 2007 and the two exhibitions at the Pasinger Fabrik in Munich in 2006 and 2009. In 2009 was presented his solo exhibition La Forma Interiore at Delloro Contemporary Art in Rome, curated by Gianluca Ranzi, also presented in 2010 for the occasion of the 6th Berlin Biennale at Lucas Carrieri Art Gallery in Berlin.