Video works and films by 6 world renowned artists which explore the problems of migration but they focus on this issue without emphasising the cruel aspects. With a high degree of intelligent aesthetics and by depicting the migrants as resourceful individuals rather than strangers, they succeed in involving us in the heavy debate. 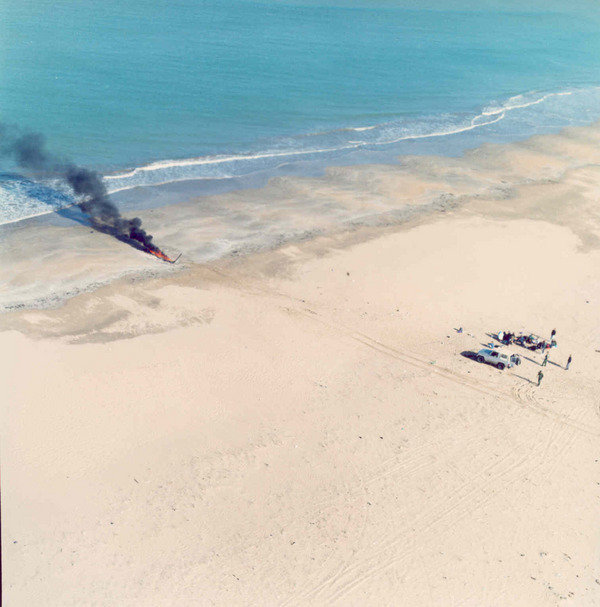 Why have we drawn borders between the countries of the world which are defined so strictly that people risk losing their lives if they cross them? Why is the right to migrate not a human right? This question may seem banal but the answer is complex. Border Crossing at Kunsthallen Brandts examines why the answer is not that straightforward and why it is relevant to all of us.
Kunsthallen Brandts has assembled video works and films by 6 world renowned artists which explore the problems of migration but they focus on this issue without emphasising the cruel aspects. With a high degree of intelligent aesthetics and by depicting the migrants as resourceful individuals rather than strangers, they succeed in involving us in the heavy debate.

The following artists are featured in the exhibition:

Alfredo Jaar (Chile/USA). The Cloud depicts a performance project enacted over the US-Mexican border. A concert is held on each side of the border while a huge cloud of balloons hovers in the sky representing the number of migrants who have died attempting to cross the border to the United States.

Chen Chieh-jen (Taiwan). Empire Borders examines and shows the discriminatory interviews that people who reply for a visa are being subjected to. Chen Chieh-jen´s film has resulted in Taiwan easing the rules and demands which the Taiwanese confront when they apply for permission to leave their country.

Ulrike Biemann (Switzerland). Sahara Chronicles is a video installation consisting of several videos exploring the complicated networks which migrants navigate within and the places where they meet each other, for example Agadez in Niger where up to 50.000 migrants gather each year.

Aernout Mik (Holland). Convergencies consists of footage from international news archives. By cutting between different scenes like railway stations, border crossings and ships, the film depicts groups of anonymous people confronting each other. As is typical to Aernout Mik´s other video works, there is an ever-present atmosphere of something indefinable and strange.

Isaac Julien (Great Britain).The audiovisual film installation Western Union, small boats, explores one of the most traumatic aspects of migration by showing how extremely dangerous it is to cross the Mediterranean from Africa. Drowned people lie on the beach but the poetic qualities of the film and the use of the sea as a metaphor adds an odd and compelling beauty to the scenes.

Guido van der Werve (Holland). In the film Everything is going to be alright, nr. 8, we follow a lone figure walking on a frozen sea. He moves towards the spectator and behind him an enormous, threatening icebreaker is getting closer to him all the time. Here it is not Caspar David Friedrich´s forces of nature which is a sign of destruction and superiority, but probably mankind´s own creations.