Part of the quadrennial cycles 'Focus Poland'. Kurant and the curator Joanna Sandell will start a series of researches on signs of our times and the status of our collective memory, starting with this exhibition 'Phantom Capital' at CoCA in Torun. Other artists and writers will be invited into the project that continues to Stockholm, becoming a collective research of the now. 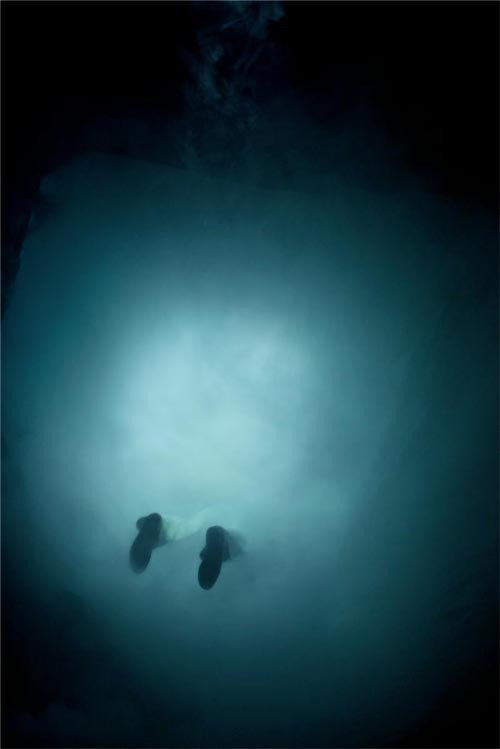 Trying to interpret the world logically can often lead us to experience a fictional version of reality. In times when information about our world as we know it is becoming more and more difficult to perceive for what it really is let’s turn to art. Art not as a saving force, but as a tool to understand the world as crazy, violent, magical and bewildering as it is.
The art of Agnieszka Kurant is all this and more. Her works act as a magnifying glass both for serious research and creating a playful fire.

Kurant’s practice relates to the “economy of the invisible”. She is interested in the “unknown unknown” of knowledge, “general intellect” and collective intelligence, mutations of memes and manipulations of collective consciousness. Her works reference phenomena such as virtual capital, imaginary property, immaterial labour. Kurant explores how things created as fictions, rumors, paranormal phenomena, myths, objects not existing materially, enter into the economy of the contemporary world, how even the imaginary or the existence of the future in the present is also colonized, valorized and politicized.

Kurant is interested in the hybrid status of things: hybridity of value, authorship, production, dispersion and ownership as well as aura of objects and the new modes of production, distribution and dispersion in cognitive capitalism. Her works are often in constant transformation and have shifted their status and meaning in different ways since they were created. They shift forms and formats depending of different quasi-fictional or unexpected factors, parameters and contexts operating in reality, such as the impact of rumors, fictions or the weather on economy and politics. Kurant often refers to the concept of non-knowledge and “unknown unknown” as described by Sarat Maharaj and to the idea of the existence of Extremely Rare Events/ Black Swans (as described by Nassim Taleb and Andrzej Nowak) and how they can be capitalized on.

Artist Agnieszka Kurant and curator Joanna Sandell will start a series of researches on signs of our times and the status of our collective memory, starting with the exhibition “Phantom Capital” at CoCA in Torun.
Other artists and writers will be invited into the project that continues to Stockholm, becoming a collective research of the now seen through the eyes of artistic visions and memory.
Fragments of the exhibition at CoCA will also be included in Kurant’s solo exhibition-project at the Guggenheim Museum in New York, starting in the fall of 2012.

During her exhibition “Phantom Capital” in CoCA Torun some of Kurant’s previous projects, like “Future Anterior”, “Phantom Library” and “Map of Phantom Islands” will be presented along with newly commissioned works: “Multiverse” and “Silence is Golden” as well as a translation of Jean Yves Jouannais’ book “Artists without Artworks” with Kurant’s commentaries.

In “Future Anterior” Kurant produced a version of New York Times from the year 2020. A professional clairvoyant who collaborates regularly with Interpol, police and governments and is a reliable source of information for Interpol, businessman and politicians was asked to create a forecast of what will happen in and around 2020. The forecasts were later developed by the artist into an issue of New York Times with articles written by several invited New York Times journalists. The newspaper has all the parameters of NYT from a bar code to advertisements bought by existing companies. It is however printed with disappearing ink which becomes completely invisible above 26 degrees and comes back to black when it is cooled down. As a result the newspaper appears and disappears depending on the weather conditions.

“Phantom Library” is a project which consisted in creating physically a library of fictional, invisible books - books that don’t exist, except in the pages of other books. Fictional, imaginary books unwritten, unread, unpublished mentioned or described in real, existing books by authors such as Philip K. Dick, Stanislaw Lem, Jorge Luis Borges, Vladimir Nabokov, Richard Brautigan and many more. The project was based on Kurant’s research based on the research of (among others) Enrique Vila-Matas, Brian Quinette and Pawel Dunin Wąsowicz, the publication of whom - "Widmowa biblioteka" is referenced in the title. Kurant produced the fictional invisible books as real sculptural objects for which she bought ISBN numbers and barcodes to give them status in the material world. Behind each book there is a complex economy of its production process designed to manufacture hundreds or thousands of copies. In Kurant’s piece this complex and costly economy serves to produce just one single copy of each book, imagining a new hybrid mode of production: between singularity and individuality and mass production. The covers of the books were designed in collaboration with the artist and graphic designer Kasia Korczak (Slavs and Tatars).

“Map of Phantom Islands” is the map of the world with only fictional islands marked, all other continents were removed creating a map of imaginary territories where colonial influences and power relations can also easily be shown. The maps depict all the phantom islands that during the history of civilization were ever shown on maps of the world as results of Fata Morganas and mirages observed in different places around the globe, cartography errors, misconceptions about the world, rumors, myth and legends. Some phantom islands were also intentional errors of explorers who tried to persuade governments to get money for conquering of new lands and invented and placed on maps some nonexistent territories which later continued appearing on other maps over centuries. All these islands appeared once or a few times and with the time and development of knowledge and cartography gradually disappeared from maps but many of them persisted on maps until 1943 (development of aerial photographyand ). Some caused real political conflicts and almost led to wars, e.g. Antilia led to a major conflict between Portugal and Spain.

“Multiverse” is a series of minus one dollar coins produced from 25 cents coins where the phrase “quarter dollar” was replaced by the phrase “minus one dollar”. The work is both a reference to the problem of debt and a hypothesis of a parallel alternative economy existing in another world as anti-matter.

“Silence is Golden” is an accumulation of silent pauses from various political speeches from the beginning of voice recording till today. The use of silent pauses can be very strategic and meaningful and its political impact was often analyzed by philosophers, anthropologists, linguists and coachers. It can be compared to use of intervals in music. Certain famous pauses in speeches of e.g. Hitler, Winston Churchill, JFK, Georges Pompidou or Fidel Castro have become iconic examples of creating impact through powerful silence and its timing. Silence represents also the omission, censoring or suppressing and concealing of certain information which in public speeches often relates to manipulations of collective memory. What is of interest for Kurant are also the problems of copyrights of recordings of public speech which belong to a public domaine and are considered the national heritage of a given country. Therefore the sales of records with the recorded speeches has to be managed solely by the state and cannot be privatized by record companies. This has caused numerous lawsuits for copyrights. The copyrights of the state are however related to the speech and concern the voices. Are silences also copyrighted?
Kurant’s work is inspired by the short story of Heinrich Boll “Murke's Collected Silences”. The Murke of the title is a young editor, a graduate of psychology working for a radio station. He starts collecting bits of tape discarded on the studio floor - tape containing silence - splices them together and takes them home to listen to in the evening. Murke ultimately trades a portion of silences with a radio producer for fragments of other recording he offers him in exchange.
Kurant’s piece is a realization of a phantom work that existed inside Boll’s short story. Kurant produced an entire record of silences which is played at the gallery as a soundtrack for the show. A limited edition of the record will be available for sale as vinyl transforming Murke’s idiosyncratic hobby into a product.

Agnieszka Kurant (1978) is an artist based in Warsaw and currently New York. She represented Poland at the Polish Pavilion at Venice Biennale 2010 (collaboration with the architect Aleksandra Wasilkowska).
Her works have been shown in art institutions including: Witte de With, Rotterdam (2011); Palais de Tokyo, Paris (2004); Tate Modern, London (2006); Yvon Lambert Gallery, New York (2005) , Creative Time, New York (2007) and Museum of Modern Art, Zachęta National Gallery of Art, Centre for Contemporary Art Ujazdowski Castle, Warsaw. Kurant has participated in international contemporary art exhibitions including: Performa Biennial, New York (2009), Athens Biennale (2009), Moscow Biennale (2007) and Bucharest Biennale (2008). In 2008 she was commissioned to realize Frieze Projects at Frieze Art Fair, London. In 2009 she was shortlisted for the International Henkel Art Award (MUMOK, Vienna). Kurant was an artist in residence at Palais de Tokyo, Paris in 2004; ISCP, New York in 2005; Konstfak, Stockholm in 2007 and at the Paul Klee Center (Sommerakademie) in Bern, 2009 and Location One (New York, 2011-2012). Sternberg Press published Kurant’s monograph “Unknown Unknown” in 2008. Herr forthcoming exhibitions include a solo show at Fortes Vilaca Gallery in Sao Paulo and a solo project at the Guggenheim Museum in New York.

Joanna Sandell is director of Botkyrka konsthall, Sweden. She is founder of the international artist’s book publishing house Labyrint Press together with artist Pia Sandström, and the residency program Residence Botkyrka. Sandell has also curated exhibitions internationally together with artists and curators where the focus has been to change the exhibition format for new and changing audiences. (“Sauna” video program in women’s prison of Ulan Bataar, Mongolia 2002, “Definitely Maybe” in six public locations in Istanbul, Turkey, during the Istanbul biennale 2003 and the “Fittja Open” in Sweden, introduced 2010.)