43rd edition: A French school, 60 exhibitions, 50 stages. "We have therefore invited heads of photography schools from four continents to the feast, along with their photographer guests from all over the world - this is in the context of the Prix Decouverte. We have also invited great foreign artists who have chosen to work in France, in the persons of Josef Koudelka, Amos Gitai and Klavdij Sluban. 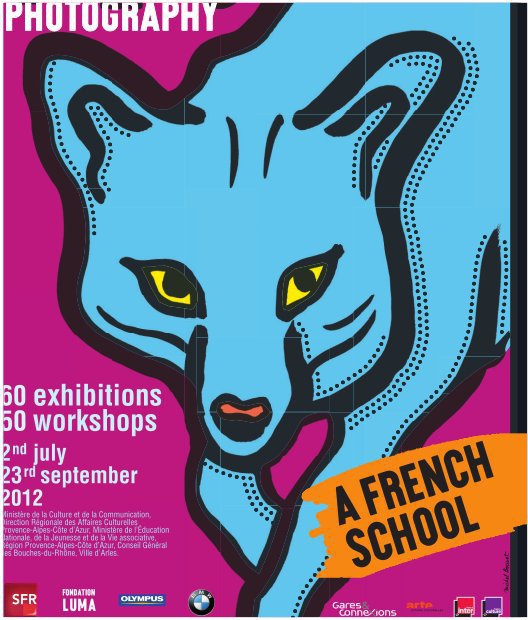 François Hébel, director of the Rencontres d’Arles.
Ten years, twenty years, thirty years is the time it takes for the talents of the photographers, historians, and curators trained at the École Nationale Supérieure de Photographie (ENSP) to develop.
The school was founded in Arles in 1982 and was the brainchild of Lucien Clergue, Jean-Maurice Rouquette, the founders of the Rencontres, and Alain Desvergnes. Desvergnes was an important director of this festival, then of the school, which he planned to the last detail with the help of his wife, Marie-Annick Lenoir. The little sister of the Rencontres was a beneficiary of the money devoted to culture by François Mitterrand and Jack Lang, when the Socialists came to power in 1981.

Maryse and Antoine Cordesse, staunch and benevolent supporters of photography at Arles, were a decisive influence. Thanks to Michel Vauzelle, the President’s spokesman and Gaston Deferre, Minister of the Interior and Decentralisation, they arranged for ENSP to become one of the French President's 'grand projects', along with the refurbishment of the Louvre, the Finance Ministry at Bercy, the new Opéra Bastille, the National Library, and the Arch at La Défense.
It was the smallest and the least expensive of the 'grand projects'. The time has come to see how it is getting on. The 2012 edition of the Rencontres is entirely devoted to it.

With an inflated market paying astronomical sums for the work of ex-alumni of the schools at Düsseldorf (Andreas Gursky, Thomas Ruff, Elger Esser, Candida Höfer, et al.) and Yale (Gregory Crewdson, Philip-Lorca diCorcia, et al.), and the British school being recognized as an informal movement with Martin Parr at its head, there is every reason for us to see what has become of the 640 or so students from Arles.

This project, which I drew up with Rémy Fenzy, today’s Director of the school and himself a 1989 graduate, and with the support of the tutors and past directors, rests on two certainties: the Arles school sees photography as an integral part of contemporary art and the teaching there in no way seeks to mould the students to the style of the tutors, but to endow them with the knowledge and critical ability they need in order to develop in their various and diverse ways to the highest level of excellence.
All the former students we spoke to described leaving the school as a violent experience; the three years they had spent there had been so intense and their previous certainties had been given such a shaking.

Students have a number of naive ideas to sift through; they are finding their way. They need to be given time to find their own vocabulary, their own aesthetic; time to free themselves from the influence of the great photographers they discover in the course of their studies. Just as one would not ask an engineering student to build a bridge, a photography student cannot be expected to show the brilliance that his or her own research and experience will eventually bring.
Hence our feeling that we should allow time for this maturity to come into being, before we celebrate. Not having been done before, the project carried a certain risk.
But the result has been to find a cornucopia of styles and talents among the photographers, and genuinely stimulating points of view on the part of those who have become curators of exhibitions.
If only a few names are well-known to the public, they all deserve recognition in their own right. Our selection is inevitably somewhat arbitrary; there was just as much reason for others to figure on this list.

As usual at the Rencontres, our bias has been towards individual exhibitions, and we are displaying significant elements in the careers of thirty or so photographers. The exhibitions organised around collections are also the fruit of curatorships by former students who have become historians of photography.

To the great satisfaction of the tutors at Arles, who are anxious not to reproduce what has happened with the German and American schools, it is difficult to assign those from the ENSP who have become photographers to any particular school. It is similarly impossible to label them with the stereotype of French humanist photography. If there is an ancestry for some of them, it is to be found in a certain relationship to landscape, no doubt due to the DATAR photographic mission of the 80s and 90s in France. But this is certainly not the case for all those presented here.
We were keen to make the point that teaching at the ENSP has been indelibly marked by the original three tutors, Alain Desvergnes, Christian Milovanoff and Arnaud Claass, all three of whom are photographers. We are devoting an exhibition to each of them.

A French school must inevitably drink at the well of other cultures. We have therefore invited heads of photography schools from four continents to the feast, along with their photographer guests from all over the world – this is in the context of the Prix Découverte. We have also invited great foreign artists who have chosen to work in France, in the persons of Josef Koudelka, Amos Gitaï and Klavdij Sluban.

At the Book Award this year, we will also be paying homage to Contrejour, Claude Nori's publishing house which was a great influence on French photography at the end of the 70s and beginning of the 80s.

Sophie Calle, who’ll be exhibited in the chapelle du Méjan, features among other eminent French artists working with photography who have been invited to the festival by the Association du Méjan and the Centre des Monuments Nationaux.

The educational mission of the Rencontres d'Arles grows: with publication of a game for schools, concerned with decoding images – successfully tested at last year's "Back to School in Images"; with workshops available throughout the year; and with the launch of production of films broadcast on the net from the summer Rencontres.
Working with the ex-students of the Arles Photography School has provided the Rencontres team with a whole series of wonderful moments, admiring astonishment on coming face to face with little-known works, and exciting discoveries in the collections of the Galliera Museum, the Société Française de Photographie, the Fonds National d’Art Contemporain, and the collections of the Peruvian curator Jan Mulder or the Fratelli Alinari from Florence.
A French school of photography most certainly exists. It is multifarious, dense, gay, erudite, and, though sometimes too self-effacing, extraordinarily full of talent.

The exhibition catalogue will be available in July (co-published by the Rencontres d’Arles and Actes Sud Editions
in a French and English version). Price: 46 euros TTC

Opening week: 2-8 July
3, 4, 5 and 7 July: 10.15 pm evening screenings at the Théâtre Antique.
6 July: Night of the Year in the streets of Arles.
7 July: Rencontres d’Arles Prize awarded in the evening at the Théâtre Antique.
2-8 July: Rencontres d’Arles Village at the Parc des Ateliers from 2-8 July. (Free entry)
3-5 July: Symposium at the Théâtre d’Arles. (Free entry within the limits of available seating)
8-10 July: Seminar at the Théâtre d’Arles. (Registration at EDUCATION AND TRAINING)
2-8 July: Photo Folio Review (Registration at EDUCATION AND TRAINING)
Conferences, debates and book-signings in the presence of artists and programme curators throughout the
opening week at the Rencontres office, 34 rue du Docteur Fanton.